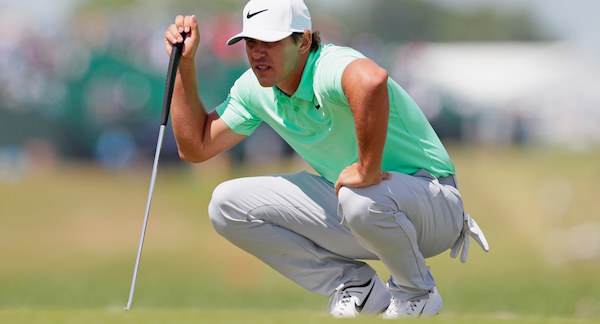 The final golf major of the 2017 season, theUSPGA Championship kicks off Thursday night and with it we present another Moneyball team of the tournament for the $25 entry, $5,000 guaranteed prize pool competition.

Our team’s main theme this weekend will be long hitting with the lengthy Quail Hollow course in North Carolina playing host to the USPGA Championship. Sprinkled in will be some value options that we think have a chance of making the cut.

Rory McIlroy
Our pick to win the tournament is the long hitting, in form World No.4 Rory McIlroy. The Northern Irishman has a ridiculous record at the Quail Hollow, with two professional wins there already. Will be aiming to make it three this weekend and even if he doesn’t, should be there about on Sunday afternoon.

Dustin Johnson
The most consistent player on tour at hitting the ball long is also one of the most consistent players on tour, period. Has had an up and down 2017 but to cap it off with a major win here would be massive. A 54th place at the Open Championship is his best result in a major this year but missed only one cut throughout 2015-16.

Brooks Koepka
The breakout player of the last calendar year has been the American, Brooks Koepka. An 11th place finish at the Masters earlier this year has been his worst result in his last four trips to a major golf tournament and has finished inside the top five in the last two USPGA Championships. Will go close.

Webb Simpson
Picking this one for the hometown hero factor. Born and raised in Raleigh, North Carolina, Simpson now resides next door to the Quail Hollow Golf course and is a member at the club. Safe to say he has a slight advantage even on the newly revamped course. Hasn’t had the best 2017 with two major results in the 30s and one cut but could turn it around here. Also rarely misses the cut.

Thomas Pieters
Belgium’s biggest chance lies with young gun Thomas Pieters, who has had a breakout season after tying for fourth place at the Masters earlier in the year. Is yet to win on the USPGA Tour but has had a great year with four top five places. Would be unlucky to miss the cut here.

Alex Noren
Just $6,300 for the ninth ranked golfer in the world? We will take that any day of the week. Is the uber consistent golfer on the European Tour. While he hasn’t had as much success in the majors, his form in Europe is undeniable and worthy of a top ten ranking.

Scott Hend
Is probably the best Aussie chance outside the big three of Day, Scott and Leishman and is coming off some good form after a top ten finish at the WGC-Bridgestone Invitational just last week. Value pick but a chance for a deepish run.

Ian Poulter
After being in danger of losing his PGA Tour card a few months ago, Poulter came out with a bang at the Open Championship, tying for 14th and leading for a short time in the first round. Seems to have found some form with the result and a 2nd at the Players earler in the year.

Lee Westwood
At just $5,500, the name Westwood jumps off the page. Even when he is out of form is still one of the most consistent players in the world. While he has never lifted a major trophy, barely ever misses the cut.

And if you're unfamilar with how the scoring system for Daily Fantasy Golf works at Moneyball, here's a quick rundown so you can get cracking straight away. 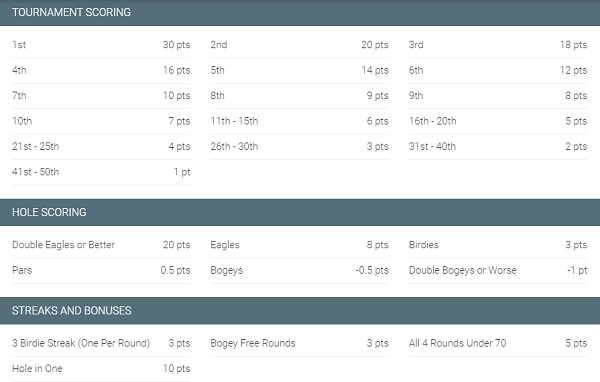 Moneyball have a great range of Golf tournaments on weekly! Click the banner below to create your account and start playing!