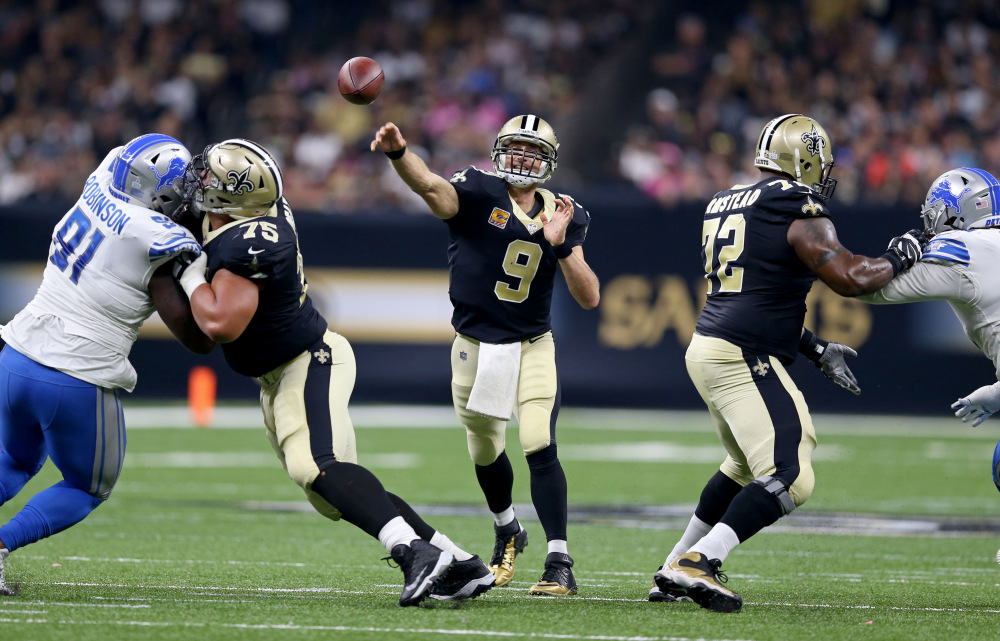 Fantastic 11 game early slate this Sunday in the NFL which means, once again, there will be upwards of $3 million USD up for grabs at DraftKings! We provide our best daily fantasy tips for the Sunday slate in Week 10 of the NFL below!

Hard to deny what Drew Brees is doing at the moment. The veteran QB is having an MVP caliber season and leads arguably the best offence in the league. Brees and the Saints put up 45 points last week to become the first team in the NFL to defeat the Rams so far this season. Brees threw for 346 yards and four touchdowns with no interceptions in the win, racking up over 34 points in the process. Has a good matchup this weekend against the Bengals who allow the most passing yards in all of football.

Rivers is in the enviable position of taking on the lacklustre Oakland Raiders this weekend, who allowed San Francisco third-string quarterback Nick Mullens to pass for 262 yards and three touchdowns on the weekend. The 49ers put up 34 point in that game, so scoring should come very easy to the dynamic offence of the Chargers, led by Rivers who averages 279.5 yards per game and has thrown 19 touchdowns through 8 games.

Hunt is our number one option at running back this weekend over the likes of Todd Gurley, Melvin Gordon and Alvin Kamara. Hunt has a great matchup against the Arizona Cardinals, who allow the second most rushing yards per game in 2018 so far and have also allowed 12 rushing touchdowns, which is behind only Cleveland for the most in the league. Hunt was dominant against Cleveland on the weekend with 91 rushing yards and 50 catching yards to go along with three total touchdowns (two rushing, one receiving).

We are taking Hunt’s direct opponent in David Johnson as our cheaper option at RB this weekend. A new offensive coordinator in Arizona has yielded immediate results for the Cardinals. Johnson had over 100 all-purpose yards for just the second time this season in Week 9 and has a good matchup against the Chiefs this weekend, who allow 124 rushing yards per game and allow the highest average production to running backs in the league.

With No.1 Bengals receiver A.J. Green going down with a toe injury half way through Cincinatti’s Week 9 clash with the Buccaneers, Tyler Boyd instantly became Andy Dalton’s new favourite target. Boyd racked up 10 targets against Tampa Bay, his second highest tally of the year and caught 138 yards and a touchdown for a 31.6-point performance. Has a good matchup against the Saints this weekend, who love to get into shootouts.

After a horror performance against the Panthers last weekend where Evans scored just 2.6 points, his price has dropped to the lowest since Week 1 of the 2018-19 season. Has a good matchup this weekend against Washington, who have allowed the 9th most fantasy production to WR’s so far this season and Evans he’s yet to score under ten in two games in a row this season.

The Dolphins linebackers are currently amongst the worst in the league. Over the past month of play, they have allowed tight ends to find the end zone on five different occasions, which is the most in the league in that stretch. Jimmy Graham had a slow start to the season but was good in Week 9 against the Patriots, racking up 55 yards and a touchdown on six targets. Should see plenty more targets this weekend against the horrendous Dolphins backs.

They might be the most expensive defence/special team on the slate this Sunday but it’s hard to look past what the Bears have been doing of late. They average over 4 points more than any other team in 2018 so far and have a good matchup against the Detroit Lions on the weekend, who allow the 10th more points to D/ST. Chicago racked up a monster 28-point game against Buffalo last weekend that included four sacks, three interceptions and two defensive touchdowns.