Aside from the playoffs, Thanksgiving weekend is arguably the best time of the NFL season. Instead of just the one regular Thursday game, three massive matches are scheduled for Thanksgiving Thursday (Friday AEDT) and to celebrate, DraftKings are hosting a monster $1,500,000 tournament for the three-game slate! 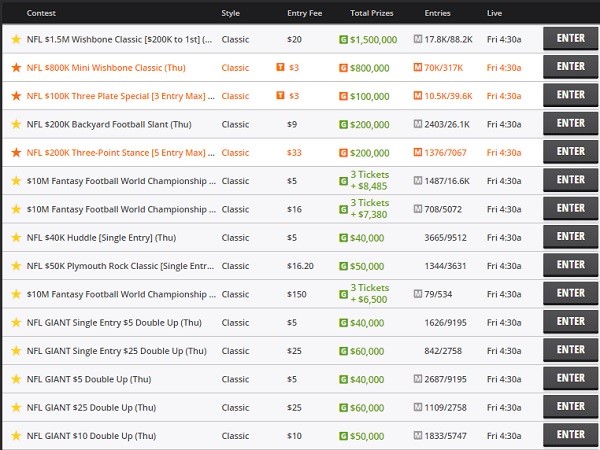 At 39 years of age, Saints QB Drew Brees is having one of his best seasons in the NFL. He is currently one of the favourites for the NFL MVP season and had a dominant fantasy performance against the Eagles in Week 11. Brees put up a whopping 363 passing yards along with 4 touchdown passes and no interceptions for a shade over 33 fantasy points. It was the third consecutive game that Brees has scored at least 28 points and at 25.6 points per game, he is the highest scoring QB on the Friday slate and a must have.

If there’s one thing that the Saints haven't done well so far this season despite their nine-game win streak, it’s defended the passing game. They allow 280 passing yards per game, the sixth highest tally in the league and they come up against a divisional opponent this weekend who love to throw the ball. Julio Jones has been one of the most consistent wide receivers in the league this season, averaging 22.8 points and has scored over 21 in his last four games in a row.  Jones has averaged over 120 yards per game in his last two contests against the Saints.

Couple of running back sleepers here beginning with Mark Ingram, who is currently over $2,000 cheaper than the big two running backs of the day, Alvin Kamara and Ezekiel Elliot. Ingram has been seeing plenty more of the ball since returning from injury earlier in the season and has been particularly impressive over the past two weeks with two scores of over 25. He has racked up over 100 rushing yards in both of those games and found the end-zone on three separate occasions. I expect the Saints to put up another big score on the Falcons on Friday so Ingram should score well once again.

Theo Riddick is a fantastic cheaper option at running back this Friday with No.1 Detroit running back Kerryon Johnson currently battling a knee injury. Riddick averages just 8.8 points so far this season but should see a bump in production, even if Johnson does play, as he should be on limited reps.

After a hot start to the season, Matt Stafford has fallen away a bit over the last month or so. He has not scored over 20 points in his last three games in a row and has an extremely tough matchup this Friday against the Bears, who have been one of the most dominant defences in the league. Chicago allow just 237 passing yards per game and their 32 sacks is tied for the 5th most in the league. They are also ranked third in the league in passing yards per attempt.

Another player with a tough matchup this weekend is Jordan Reed. As inconsistent as the Cowboys have been so far this season, they have maintained a pretty good passing defence. Their mark of just 13 passing touchdowns allowed is the fewest of any team in the NFL and Reed has combined for just 50 catching yards in his last two games against the Cowboys.