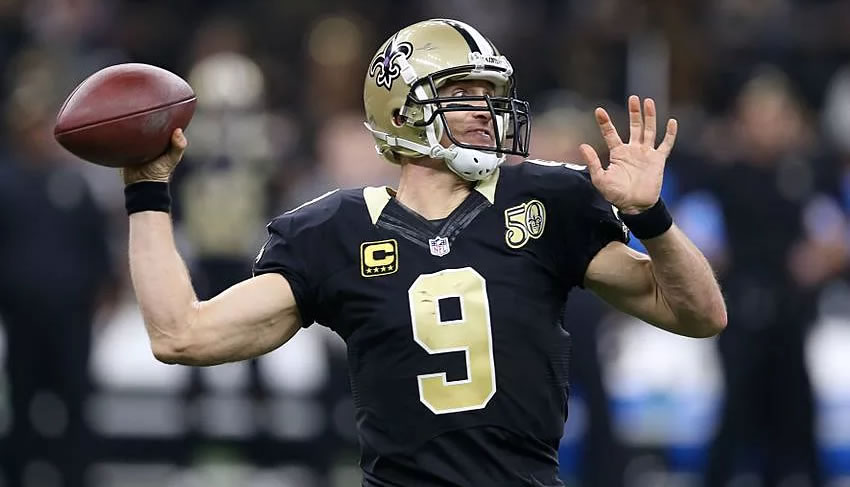 We had a couple of good picks in last weekend’s Sunday NFL daily fantasy tips and hope to keep that momentum rolling this week. DraftKings are once again offering a massive prize pool for the early game slate this Sunday (Monday AEDT) and we are back with another round of daily fantasy tips for the $3,000,000 tournament here.

Brees had an uncharacteristically bad performance against the Cowboys last weekend, passing for just 127 yards and throwing just his third interception of the season. He’ll be desperate to bounce back this weekend and give the Saints a win to stay in contention with the Los Angeles Rams for the No.1 seed in the NFC. Brees has a great matchup this weekend against the Buccaneers, who allow the fourth most fantasy production to quarterbacks in the league and have allowed more passing touchdowns than any team except Oakland. Breed put up 439 passing yards and three touchdowns the last time he faced Tampa Bay.

Lamar Jackson’s points per game number in 2018 of just 7.3 is a low because he played just a limited role in the Baltimore offence throughout the first nine games. However, Jackson has taken up the starting role for the Ravens in the last three games and has averaged almost 20 points per game. Was good against the Falcons on the weekend, passing for 125 yards and adding a further 75 rushing yards including a touchdown. Has a good matchup this weekend against Kansas City who have allowed the 5th most fantasy points to quarterbacks this season.

Jones was fairly quiet in the Packers loss to Arizona on the weekend, rushing for just 36 yards and catching for another 16 yards. He did find the end-zone, however, to help him tally up 15.2 points. He hasn’t scored under 15 points in his last four games and averages 24 points over those four games. Has found the end-zone at least once in six of his ten games so far this season and has a good matchup against the Falcons this week, who allow the most fantasy points to running backs of any team in the league.

James White has done just about everything except find the end-zone over his last two games. He has combined for 99 rushing yards and 97 receiving yards over the two games while still putting up over 13.5 points per game despite the absence of a TD. He averages 19.4 points per game in 2018 and has a good matchup this weekend against the Dolphins, who are ranked 27th in the league in points allowed to running backs.

After a very slow start to the season, Beckham Jr has bounced back over the last few months. While he only caught three balls for 35 yards against the Bears on the weekend, he did add a receiving touchdown and a passing touchdown to tally up 18.46 points. Hasn’t been under 13 fantasy points since Week 6 of the season and has a great matchup this weekend against the Redskins who allow the 5th most fantasy points to receivers and allowed 306 passing yards to Carson Wentz and the Eagles in Week 13.

Michael Thomas has obviously been the Saints number one targeted receiver so far this season, however, he picked up a slight injury in Week 13 against the Cowboys and is listed as questionable for their matchup against Tampa Bay this weekend. Tampa Bay have struggled mightily against the pass in 2018 so Drew Brees should be airing it out regardless of who his receivers are. Kirkwood racked up 30 yards on three targets including a touchdown in Week 13, his second game in a row with a touchdown. He should have massive spike in production if Thomas is out but we expect him to play well anyway.

Impossible to look past the form of Travis Kelce at the moment. Over the last two weeks, the Cihefs tight end has racked up 74.5 points including three touchdowns and has a good matchup against the Ravens this weekend. Although he plays a different position, the absence of Kareem Hunt should have a positive effect on Kelce’s fantasy numbers as he should get more plays run for him. His 28 combined targets over the last two weeks is easily his highest over a two-game stretch.

We are opting for the defence that is playing against San Francisco once again this weekend. The 49ers have been horrendous on offence over their last two games, tallying up just 25 combined points against the Buccaneers and Seahawks. They are back at home this weekend but their offence shouldn’t improve too much. The Broncos have held their opponents to under 20 points in three of their last four games and should have the upper hand this weekend.