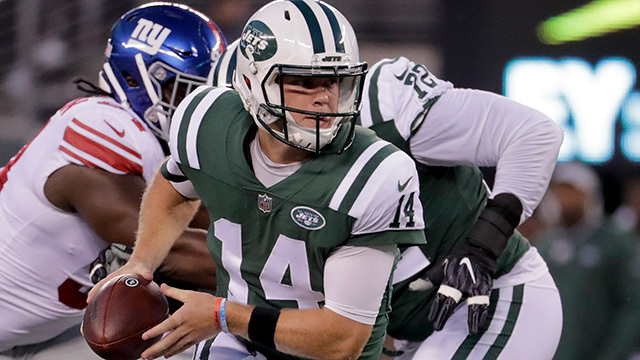 Decent results in our NFL Sunday slate fantasy tips as a few of our picks went off, most notably our selection at quarterback Patrick Mahones who threw for 326 yards and six touchdowns in the Chiefs win over the Steelers.

NFL Week 3 gets underway this Friday morning (AEST) with the Cleveland Browns hosting the New York Jets and DraftKings are once again offering a massive prize-pool for the round opener. DraftKings major tournament for the Friday morning game will be a massive $1 million prize pool, with the winner set to collect a cool $250,000, all for just a $10 entry fee. We have you covered with our best daily fantasy tips for the game below.

Must Have – Sam Darnold, Carlos Hyde

Rookie QB Sam Darnold couldn’t carry the Jets to a second win in a row in Week 2 as the Jets went down to the Dolphins in Miami. He did, however, throw for 334 yards and a touchdown in the loss, taking his season tally to well over 500 yards through two games. Cleveland’s defence has actually been better than we expected it to be at the start of the season, keeping both Pittsburgh and New Orleans to just 21 points each in their first two games. They did allow Ben Roethlisberger and Drew Brees to pass for an average of almost 300 yards in the two games, however, so we think Darnold should be the better QB on Friday.

The Jets pass defence has been firing on all cylinders throughout the first two weeks of the season. Picked off Matt Stafford four times in the Week 1 win over the Lions before keeping Ryan Tannehill to just 168 yards, albeit in a loss, in Week 2. They struggled a little against the run though, as the Dolphins were able to rush for 135 yards and a touchdown on just 31 attempts on the weekend. Carlos Hyde has had two solid games so far with scores of 13.5 and 12 and should be your best option at RB on Friday.

Higgins didn’t get the start against the Saints on the weekend with the Browns opting for rookie Antonio Callaway instead. However, Higgins racked up more targets and more catches than the rookie, totalling five receptions for 47 yards. Taylor is still feeling out his passing game at Cleveland and Higgins looks to be an early favourite receiver.

Bilal Powell might be sitting second string in the Jets running back department at the moment, having only received five carries on the weekend, but it’s his work as a pass catcher out of the backfield that really impressed us. Powell caught five of six targets for 74 yards and a touchdown to score 19 fantasy points and should be good against the Browns, who allowed RB’s James Conner and Alvin Kamara 192 and 99 all purpose yards respectively in week’s one and two.

First string New York tight end Neal Sterling left Sunday’s game against Miami with a head injury and did not return, leaving him in question for this weekend’s game. The rest of the tight end responsibilities were shared amongst Eric Tomlinson and Chris Herndon. There’s not enough stability in any of the three Jets tight ends at the moment. I’d be leaning towards one of the Browns here.