2018 AFL Chalk, Chance or Chump: Round 1 Essendon vs Adelaide 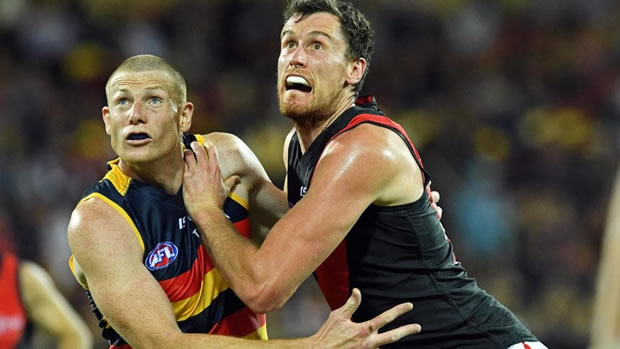 The second match of the weekend will see Essendon host Adelaide at Etihad Stadium on Friday night. PlayON will once again be running a $2,000 guarantee for this match, along with qualifiers for the $100,000 AFL Super Contest later in the year.

We’ll give you a head start on your PlayON team lineups with our Chalk, Chance and Chump picks for Essendon vs Adelaide.

In a game stacked with midfield talent, it would be easy to pluck one of them to have as your lock player, but to be honest, a case can be made for many of them to appear in your lineups. The chalkiest player in the match is ruckman Sam Jacobs at a $15.1m price tag on PlayON. He’s a dominant player and when you compare to Essendon’s very average Tom Bellchambers at $13.5m, spend up the few extra dollars for Jacobs to get a prolific points earner.

After crossing from the Bulldogs in rather unpleasant circumstances, Jake Stringer will be looking to make a good impression in his first game for his new club. A player with huge potential, Stringer will float across half forward and will be able to fly under the radar next to big guns like Daniher and Hooker. Capable of possessions and goals, he might be worth a gamble at the rather affordable $10.2m price tag.

When you get dumped by the worst list in the competition, it’s hard to see former Roo Sam Gibson making much of an impression in the Adelaide midfield. So many other players are ahead of him in the pecking order, yet Gibson has been named to make his Crow debut on a wing. A good runner, but a terrible user of the ball, there are many other ways I'd prefer to spend $13.4m.