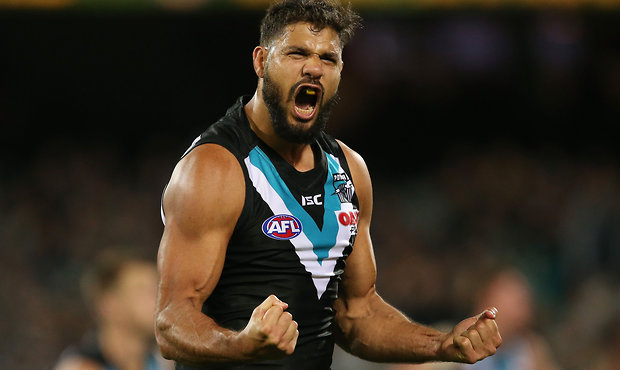 Port Adelaide will welcome the Western Bulldogs to the Portress on Thursday Night to open Round 13 of the AFL Premiership Season. The Power showed that they’re contenders when they knocked off the Tigers last weekend, but they’ll need to back it up with another strong performance against the Dogs.

As usual, PlayON have some huge cash prizes up for grabs in their AFL tournaments this weekend, with a massive $1,000 on offer on Thursday Night! They also have several qualifiers for the season-ending $100,000 Super Contest as well as a range of smaller buy-in contests if you want to get a taste.

Take a look below at this week’s Chalk, Chance or Chump as we look to help you out with your DFS AFL lineups for this Thursday night!

In my opinion, Ryder should be the first picked in your fantasy team on Thursday Night. He’s the reigning All-Australian ruckman and has strung together a couple of decent scores to show us he’s getting back to his best. However, the main reason I like him on Thursday is because of who he’ll be competing against. The Bulldogs have three potential matchups for Ryder, those being Tom Boyd, Jordan Roughead and Tim English – all three couldn’t get a tap in a plumbing store. Chuck him in your team for $12.3m at PlayON.

A player that I’d strongly consider taking a chance on this week is the mercurial Chad Wingard. After a disappointing first half of the year, Coach Ken Hinkley threw Wingard into the middle against the Tigers to get his hands on it. He responded with a game high 31 touches, 8 tackles and 7 clearances. You can expect him to play through the midfield again after that sort of performance, with Robbie Gray spending more time forward. Wingard is cheap at just $12.5m at PlayON, so why not take a chance?

The reasons for Chad Wingard being our ‘Chance’ of the week are the same ones that make Robbie Gray the ‘Chump’. Wingard’s increased midfield time means that Gray will spend large amounts of time up forward and much less time around the ball. Although he’s still extremely dangerous in the forward line, Gray just doesn’t have as much opportunity to rack up fantasy points like he does in the midfield. At a hefty $13.7m price tag at PlayON, I advise staying clear of him this week.