2018 AFL Chalk, Chance or Chump: Round 2 Adelaide vs Richmond 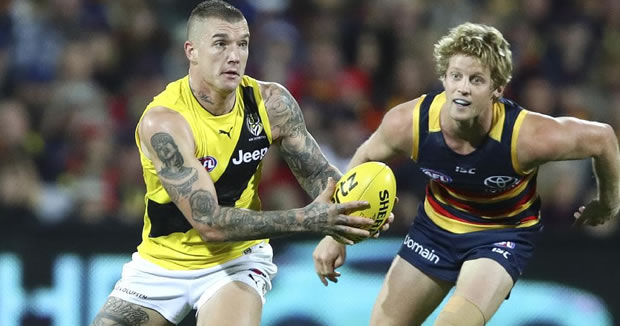 We have ourselves a cracking match to kick off Round 2 of the 2018 AFL season as Adelaide hosts Richmond in a Grand Final replay. PlayON are giving daily fantasy players some tremendous value this season with overlay contests every week, and daily qualifiers for their end-of-season $100,000 AFL Super Contest!

We'll give you a head start for your team lineups for the PlayON $2,000 Guaranteed Adelaide vs Richmond match with our popular Chalk, Chance and Chump article. Who should be a lock, who should you give some consideration to, and who should you avoid this Thursday night? Let's find out!

Rookie Tom Doedee was already touted as an exciting prospect at the Crows and he proved why on debut against the Bombers last week. Doedee showed some dash from half-back with 21 disposals, 7 marks and a very healthy 80 fantasy points. At a price tag of just $6.3m at PlayON, he’s going to be the chalkiest player of the match to free up some of your budget for a stacked midfield.

If you’re looking for an affordable forward then consider Richmond’s Dan Butler at $9.8m at PlayON. Butler had struggled at times as a small forward, but it looked to have improved in his first match this season, getting up the ground to work into the game. Butler scored 88 fantasy points, thanks to three goals, 13 touches and, most importantly, 7 tackles. Those are solid numbers but consistency will now be the challenge for the young Tiger.

It’s a match with a good range of decent fantasy players, so it’s actually quite hard to label anyone with the “Chump” tag here. In the end, we’re going with Richmond defender Dylan Grimes. He is cheap at just $8.7m at PlayON but he is a very negative defender who just doesn’t get a lot of the ball. A really poor fantasy choice, so just stay away.