2018 AFL Chalk, Chance or Chump: Round 5 Richmond vs Melbourne 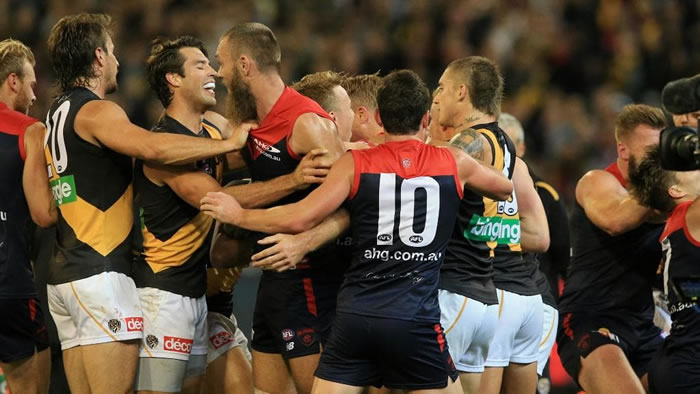 Richmond and Melbourne are claiming ANZAC Day Eve as their own with this battle starting to build a nice little tradition of its own. It’s also handy that both teams are now in the upper end of the AFL premiership table, which adds some extra spice and provides an entertaining spectacle for the neutral fans.

Once again PlayON have a nice spread of DFS AFL contests for you on Tuesday night with a $1,000 guarantee and multiple qualifiers into their $100,000 Super Contest later in the year.

To give you a hand with your fantasy lineups, here’s our popular Chalk, Chance or Chump article for Richmond vs Melbourne!

Melbourne are an infinitely better side with big Max Gawn running around with them. It seems that he’s had a good pre-season and has started 2018 in excellent form with an average of 114 fantasy points against some decent opponents (McEvoy and Goldstein in the last two weeks). His opponent here, Toby Nankervis, is a similar big-bodied ruckman and while he’s been ok, I think all fantasy coaches will be paying the extra $1m to take Gawn at $14.5m at PlayON. Gawn is more mobile and capable of lobbing up forward for a cheeky goal. Lock him in!

Dion Prestia played his first game of the season last week, after recovering from a pre-season injury, and picked up 23 disposals for 75 fantasy points in a solid showing. He’ll be much better for the run as he slowly gets his fitness back. Prestia is not your typical mid-fielder but he is capable of winning a lot of the ball, and at a price of just $10.6m on PlayON, he offers great value. Even if he hits 70-80 points, that’s a good score for that price, and he’s certainly capable of a ceiling of 100+ which would setup your team for a big score. Definitely worth consideration!

For the Chump award I was tossing up between two half-backs who have been below their best this season. Bachar Houli did score a ton two weeks ago, and is $1m cheaper, so for that reason we’re going with Melbourne’s Michael Hibberd. He’s the most expensive defender in this game at $13.5m at PlayON, but he’s just not giving the require output so far this season. In the past, he was a fantasy gun picking up plenty of cheap possessions in the backline and regularly hitting 100 points. This season, he’s yet to pass 70 fantasy points, and at that price tag, he’s too expensive to consider. Avoid!