2018 AFL Chalk, Chance or Chump: Round 5 Sydney vs Adelaide 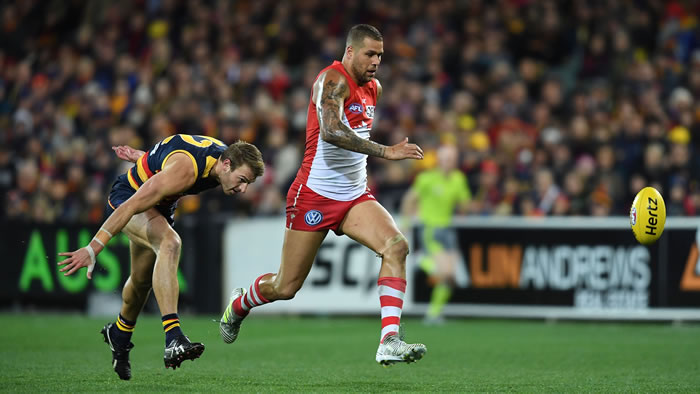 Once again we find the Adelaide Crows hitting our screens this Friday night but this time they are on the road as they head to Sydney to take on the Swans. Two AFL premiership contenders should produce an entertaining match and an interesting DFS contest for those taking on the $1,000 Guaranteed or the $100,000 Super Contest qualifiers this Friday night at PlayON.

It’s a great time to give PlayON a try as they are running a two-for-one special for this Friday night. Play in the $5 qualifier to the $100,000 Super Contest on Friday night and you’ll get a matching $5 entry into another Round 5 game for free! It’s Freebie Friday!

To give you an extra hand in compiling your team lineup for Friday night check out our Chalk, Chance and Chump DFS strategy article for Adelaide vs Sydney below.

The premier forward of the competition, Lance Franklin has started 2018 in scintillating form. He’s already leading the Coleman Medal with 17 goals in his first four games, and he’d have a good handful of Brownlow votes to go along with that. More importantly for fantasy coaches, his lowest score this year has been just 91 points, while his best was 151 in round one. Sure he won’t get it easy against the Crows defence, but Buddy has so many strings to his bow nowadays. He doesn’t have to be kicking a bag of goals to score good fantasy points since he can get up the ground, take marks, and most often uses the ball by foot. At $14.5m he’s going to take one of your premium spots in your PlayON lineup, but it’s a massive risk to leave him out.

If you’re looking for a point of difference in your midfield then consider giving Isaac Heeney a chance at a price of $14.1m on PlayON. Most coaches will be looking to the big names to fill their midfield, and this game has plenty of talent in that area, but Heeney has been a solid choice this season with four scores in the range of 88 to 98 fantasy points. His ceiling is potentially higher, but it’s important that he’s now showing the consistency that he may have lacked in previous seasons.

Josh Jenkins gets an honourable mention but get was narrowly pipped for the “Chump” award by his skipper Taylor Walker. It’s been highlighted during the week that some of his efforts last week were pretty poor, and you’d hope that he will respond in a positive way this week. However the numbers tell the tale and in three games, Tex only averages 64 fantasy points, despite his 9 goals in three games. He’s just not doing enough around the ground and has been whacked with frees against every round so far which is a nightmare for fantasy points. The SCG isn’t the easiest ground for centre-half forwards so, at a price of $11.2m, I’m happy to leave him out of my PlayON fantasy team lineup this week.