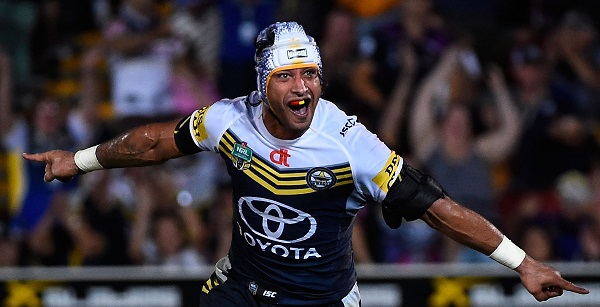 Round 9 of the NRL sees a massive Friday night clash in Newcastle with a top eight battle between the Knights and Rabbitohs. The Knights are undefeated at home this season and they’ll be looking to end a 3-0 losing streak against Souths at their fortress. Souths are 4-4 on the season and will be looking to take advantage of the Knights defence. In Bathurst, the 2nd placed Panthers will take on the 2-6 Cowboys. It’s fair to say the Cowboys have been terrible in 2018 so the pressure will be on them to perform against Penrith. The mighty Panthers are looking solid in 2018, despite a long injury list. So they’ll be confident of another victory.

To give you some extra enjoyment for this Friday, why not enter a couple of teams in the NRL fantasy $25k Qualifier at PlayON? We’ve given you a head start with our Chalk, Chance and Chump article picking out the best and the worst for your team lineups this Friday.

Unfortunately I have to pick Johnathan Thurston for the Chump award. He’s been a great player for a long time, but he’s just too expensive and risky in fantasy. Especially when you only have to spend 1 million more to get James Maloney at halfback. His lowest score of the season came against the Panthers in a 33-14 loss earlier this season. They play the Panthers this week as well. The Cowboys haven’t clicked all season in attack and it’s hard to see Thurston outscoring Maloney. He’ll probably score about 900-1000 points, which isn’t great value for $17.4 million.

I couldn’t split these two players, so I’ll talk about both. For Cogger, he has stepped into the Mitchell Pearce role and hasn’t looked out of place. He has back to back scores of around 800 points, which is huge value for his price tag of just $6.3 million. So if you’re looking for a cheap halfback and then spending big on forwards/outside backs, lock in Cogger for another 800 points. Meanwhile for Sione Katoa, he’s another player under $7 mil that can score over 800 points, which he did last week. The pleasing sign is he played 62 minutes and he doesn’t make errors or concede penalties. So he’s a very good cheap forward option.

Ponga has been an amazing pickup for the Knights and they’ll be happy with his performances especially after the injury to Pearce. So in Fantasy, he’s averaging 1305 points and has a low of 1045, which is a good score. Last week, he made 8 tackle breaks and leads the NRL with 68 tackle breaks in 2018. He’s also assisted 9 line breaks (tied first in the NRL) and ranks 4th for kick return metres. So he gets plenty of opportunities with the ball in hand and will be expected to lead the Knights attack a bit more without Pearce around. So Ponga is a great pickup in the outside backs that should earn you around 1400+ points.