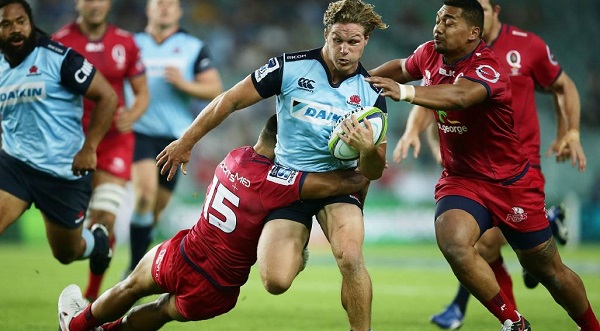 Round 10 Super Rugby action kicks off in New Zealand as the Highlanders and Blues battle at Eden Park. The last meeting was a 41-34 win for the Highlanders, so hopefully both sides throw the ball around again. Meanwhile in Sydney, the Waratahs will meet the Lions.

This should be another high scoring affair as both sides are ranked inside the top two for points scored in the 2018 season. So to give you some extra enjoyment for this Friday, why not enter a couple of teams in the Super Rugby fantasy $10k Qualifier at PlayON? We’ve given you a head start with our Chalk, Chance and Chump article picking out the best and the worst for your team lineups this Friday.

This is a tough pick with so many good players in play on Friday. However, the form of Waratah Taqele Naiyaravoro is hard to look past. He’s scoring 1017 fantasy points per game this season and I’m expecting more of the same against the Lions. The Waratahs and Lions are the top attacking team’s in Super Rugby so Naiyaravoro should get many opportunities around the try-line. He dominated the Reds last week, crossing for 2 tries and carrying 185 metres (925 points). He’s also the Waratahs leading try-scorer in 2018 and leads his side with 674 run metres.

The chance of the week will be Blues Back Rower Dalton Papali’i. He’s coming off 540 points last week against the Sunwolves as he scored a try and played 40 minutes. For just $5 million, he’s incredible value if he can produce the same effort against the Highlanders. So I think he’ll be a popular pick in the second Back Row position.

The Chump of the week will go to Bernard Foley because his 18.4 million price tag is just too risky. He makes alot of errors which is costly in fantasy. He’s ranked 2nd in Super Rugby for both turnovers and handling errors (-20 points) this season. So negative points definitely hurt his chances of a high scoring fantasy game. In the Fly Half position, you can find other cheaper options under $10 million, such as Lima Sopoaga from the Highlanders ($9.1 mil). That should net you around the same average points as Foley.