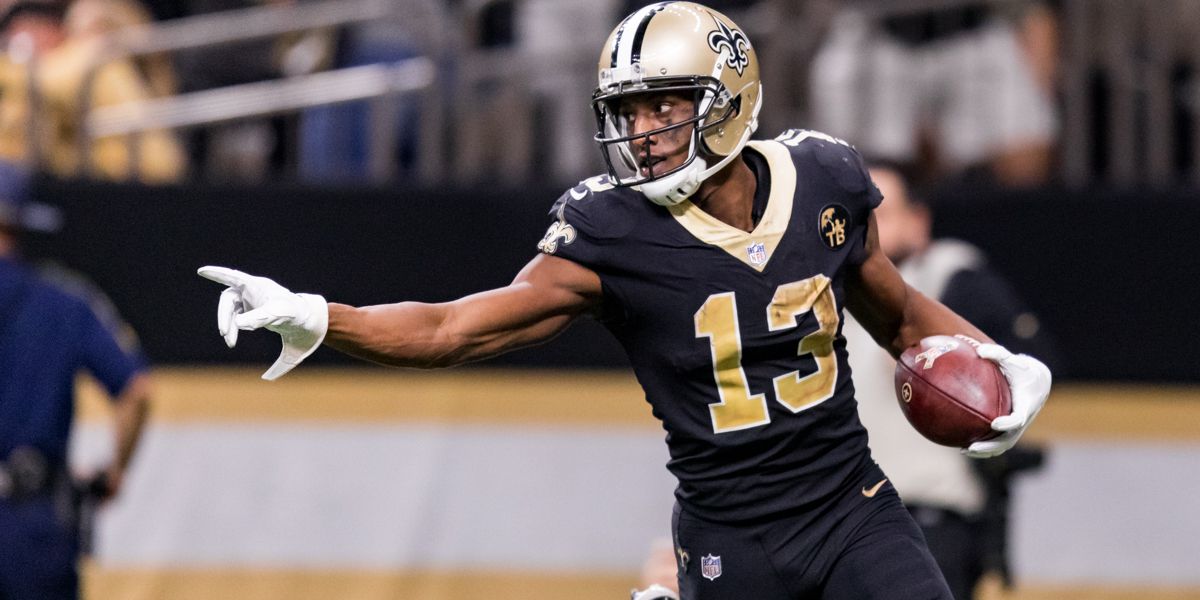 It’s a fantastic week of NFL action coming up and as usual, we will have a full fantasy preview for upcoming round.

Week 10 in the NFL gets underway on Friday with the Los Angeles Chargers taking on the Oakland Raiders from 12.20pm and continues on Monday morning with a massive 11 game slate!

Rivers has racked up passing yards for fun this season, he currently leads the league in that stat with 2609 yards through nine games. He averages almost 290 yards per game and has thrown 12 touchdown passes. It’s a great matchup for Rivers this week, who comes up against an Oakland defence that has allowed more passing yards than any team in the competition so far this season.

Over his last three games against the Raiders, Rivers has averaged 316.3 passing yards and has thrown six passing touchdowns. Back him to have another strong performance on Thursday Night Football this week.

Since his return from injuty in Week 6, tight end Hunter Henry has been the most targeted receiver for the Chargers, racking up 8.25 targets per game over those four matchups. The tight end had seven catches for 84 yards in Week 9 against the Packers for a total of 15.4 points and has a good matchup against the Raiders this week.

The Raiders have allowed the 7th most fantasy points to tight ends so far this season, and just last week, Matthew Stafford carved up the Raiders for over 400 yards and 3 touchdown passes. Should be a big passing game for the Chargers here and we expect Henry to be heavily involved.

Opting to stay away from the Chargers second string running back this week for a few reasons. As we mentioned above, the Chargers will likely play a pass heavy offence this week and while Ekeler has featured in the Chargers passing game, we are worried about his role under new offensive coordinator Shane Steichen.

Steichen gave the majority of the run plays, especially in the red zone, to Melvin Gordon against the Packers in Week 9. Gordon racked up 20 attempts compared to just 11 for Ekeler and also ran in two 1-yard touchdowns.

Drew Brees (New Orleans)
Brees returned to the Saints line-up in Week 8 after missing five games with an injured hand. He had a monster game in the win over the Cardinals, racking up 373 yards and three touchdown passes for a total of 28.92 fantasy points. Shoud be massive against an Atlanta defence that has allowed the third most points at 31.3 per game and over 260 passing yards per game.

Marlon Mack (Indianapolis)
We’ve been targeting running backs playing against Miami this season and we will continue to do so this weekend as we take Colts RB Marlon Mack. The Dolphins have allowed the second most rushing yards per game this season at 150.8 and Mack should be a heavy part of the offence this week with second string QB Brian Hoyer in for the injured Jacoby Brisset.

Henry has been a little disappointing this season after his breakout fantasy season last year, however, he bounced back in Week 9 against the Panthers, racking up 99 all-purpose yards as well as a rushing and receiving touchdown for his first 20+ point score since back in Week 1. Has another good matchup this week against the Chiefs, who allow the fourth most fantasy points to running backs in the league.

Michael Thomas (New Orleans)
Arguably the No.1 receiver in all of football at the moment, Thomas averages over 10 targets per game and 109.4 receiving yards per game. He has caught four TD passes this year and averages 29.12 fantasy points over the last four games. We are pairing him with Drew Brees this weekend as they come up against the Falcons, who have been carved up through the air this season.

Odell Beckham Jr. (Cleveland)
We’ve been avoiding Odell Beckham all year but his upside at just $6,100 is too great to look past this week. He had six targets for 87 yards in Week 9 against Denver and comes up against a Baltimore team that likes to play a fast pace and give their opposition plenty of time with the ball. Mohamed Sanu and Julian Edelman combined for 20 catches and 170 yards against the Ravens on the weekend.

Allen Lazard (Green Bay)
Lazard has become a steady target for Aaron Rodgers over the past few weeks, racking up at least four targets in his last four games on the trot. In that span, he averages just over 10 fantasy points per game and has a good matchup this week against Carolina, who are in the bottom half of the league in points allowed to wide receivers.

Darius Slayton (New York)
Slayton had a fantastic game in Week 8 against the Lions, racking up 50 yards on just two catches, both touchdowns for a total of 19 fantasy points. He wasn’t as impressive in the Monday night clash against the Cowboys in Week 9, catching just one pass for six yards, however, he has a better matchup this week against the Jets, who are bottom 10 in the league in passing yards allowed per game.

Josh Hill (New Orleans)
Opting for another Saint at tight end this week as we think New Orleans should be able to run up and down the field with Brees back in the line-up. Hill has been solid over the last two weeks with increased looks due to the inury of starting tight end Jared Cook. He should continue to be a big part of the offence.

Indianapolis Colts
While Miami have been much better since inserting Ryan Fitzpatrick into the starting line-up, they are yet to face a defence as good as the Colts. The Dolphins are the third lowest scoring team in the competition at just 12.9 points per game and average just 262 yards of total offence per game. 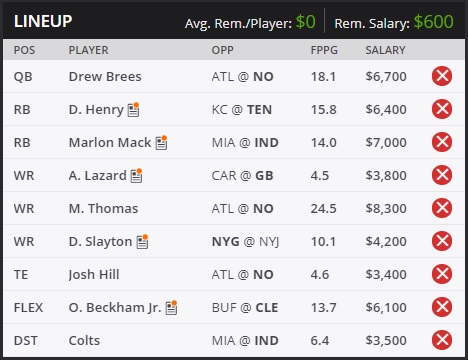 The Dallas Cowboys host the Minnesota Vikings in a Sunday Night matchup that is projected to be close and have plenty of points (currently 48). Dak Prescott is starting to receive MVP buzz but has not quite delivered on a fantasy front this season. The Vikings are chasing Green Bay in their division and a win in Texas will go a long way in their playoff run.

Hard to seperate the league's best Running Backs in this matchup and you will need to pay a high chunk of your salary to own them. Cook is leading the league in carries within the 10 yard line and Elliott has over 100+ yards in the last three games. You probably need to pick who will win this game before you pick the running back here.

With Adam Thielen ruled out with a hamstring injury, Diggs will shoulder all the targets from Kirk Cousins he can handle. Dallas secondary though is ranked 6th in the league which could limit Diggs’ fantasy scoring. Boom or Bust play which sums up Diggs fantasy season.

With Thielen out, Johnson is clearly value play for this matchup. Did score a receiving TD last week but hasn’t gone over 4 receptions all season. Johnson will start as the WR2 and should see a bump in targets on Sunday night

Witten has been Prescott’s check-down target this season with a regular production of receptions. However his average is around 40 yards per game this season. Will be a popular play and willing to go way under the field in this matchup.

The 8-0 San Francisco 49ers host the Seattle Seahawks who have an impressive 7-2 record on the season. The 49ers are 6 point favourites at home but will be sweating on the injury status of George Kittle, who is becoming more unlikely to play on Monday Night. For Seattle, Josh Gordon (formally the Patriots) was picked up off Waivers by the Seahawks and will play mainly as a WR3. The 49ers defence has been renowned as the league's best but they have not faced a top performing team this season. This will be a test against the Seahawks.

You would hope we get playing from a deficit ‘Wilson’ than playing with a lead ‘Wilson’ in this matchup. There is a clear distinction where Wilson needed to throw the ball in his fantasy scoring this season and we are banking on another “boom” performance. The Seahawks are 6 point dogs and the 49ers like to keep possession for large amounts of game time. If the Seahawks fall behind early then this perfect for Wilson’s fantasy output.

The 49ers running game has now become a two-man committee (it was 4 once upon a time) but after Tevin Coleman went bananas against the Panthers, Brieda was able to take more carries last week against the Cardinals. I expect that trend to continue and you can get Brieda cheaper than Coleman on Draftstars and DraftKings in this single game slate.

With the likely omission of George Kittle at TE. Dwelley is the only healthy TE on the 49ers roster. 4 targets for 4 receptions and 29 yards last week means a fair amount of ownership in this matchup. Whether Garoppolo goes to his only TE is up for debate but at his minimum price, it is worth the upside.

San Francisco are the worst team in the NFL for Pass attempts (average of 29) per game and when passes are completed they did not go for much yards (225 per game). Garoppolo is very good at managing the time of possession and the running game which means fantasy output is not so flash. You want the 49ers to have a deficit to chase to cash in on Garoppolo. 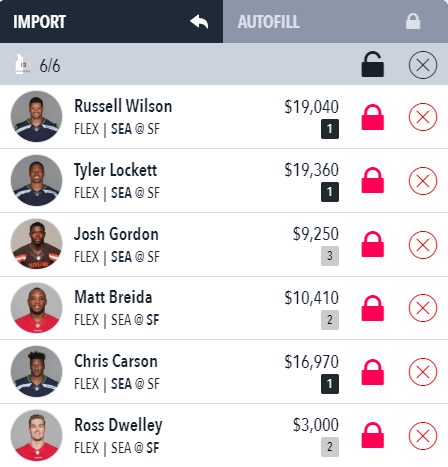 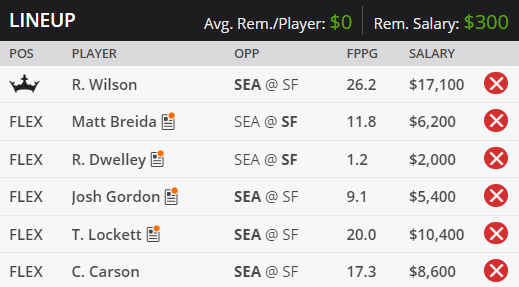