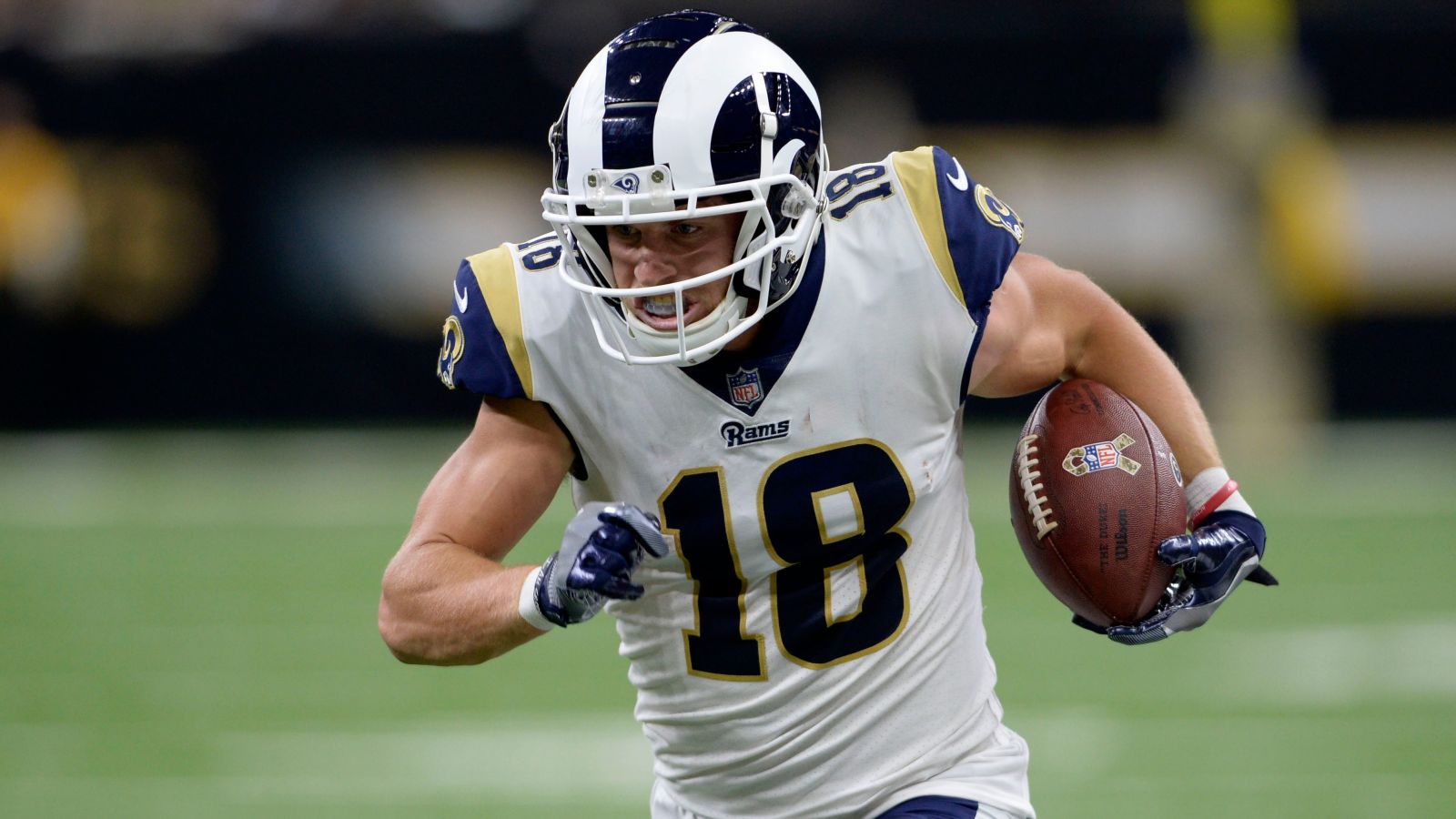 The 2019 NFL season continues this week with some fantastic matches set to play out. As always, we run you through some great fantasy plays across all sites that can help you win some cash. Check out our Week 5 preview below and good luck to everyone entering some line-ups!

Draftstars, Moneyball and DraftKings have some great feature tournaments on over the weekend, so make sure you check the sites regularly and get involved!

Kupp hasn’t slowed down since his ACL injury in 2018 with a massive start to this season. He’s coming off 121 yards and a TD on 9 catches last week. In 3 straight games, he’s finished with over 100 receiving yards and he’s averaging over 11 targets per game. As Goff’s favourite receiver, look for Kupp to be heavily involved in this Friday matchup.

Metcalf will attract lower ownership on Friday after a shocker against the Cardinals. He caught just 1 pass on 4 targets. But there’s potential for a bounce-back game against the Rams defence. They were torched by the Bucs last week, giving up 55 points and 261 receiving yards combined between Godwin/Evans. Before last week, Metcalf had been targeted 6 or more times in 3 straight games so he does offer upside if this game turns into a shootout.

Gurley’s production this season has been saved by touchdown runs and that won’t happen every week. His rushing yardage has decreased in every game thus far and there’s no doubt the Seahawks D will be aiming to shut him down. They’re 6th in the NFL for rushing yards allowed and this makes Gurley very risky if he doesn’t find the endzone.

12 game slate for Week 5 in the NFL and injuries are starting to bite for teams. But with injuries comes value and we should be able to pay-up to more expensive running backs.

Quarterback
Kyler Murray (Arizona)
Cardinals QB Kyler Murray brings a lot of upside into this road game against Cincinnati. The Bengals were recently unable to stop a similar type of QB in Josh Allen and Murray possesses the same potential in this one. He’s found more confidence running the ball with 96 yards on 12 carries in his last 2 games and should also take advantage of a mediocre Bengals secondary.

Running Backs
Dalvin Cook (Minnesota)
Dalvin Cook was always going to struggle against the Bears elite run D with 35 yards on 14 carries last week. But he should be back to his best in Week 5 against the Giants. New York is giving up 109 rushing yards per game. Cook has scored a touchdown in all 4 games thus far and the Vikings will look to get the ball in his hands once again.

Christian McCaffrey (Panthers)
It’s difficult to look past McCaffrey on this slate. With Cam Newton on the sidelines, the Panthers are leaning on him even more with back to back games of 20+ carries on the ground. He also tied his season-high for targets last week (10). His matchup against the Jaguares is nice as they’re a middle of the road team in terms of yardage allowed.

Wayne Gallman Jr. (NY Giants)
Gallman will increase in ownership this week but he’s still worth a shot at his price point. Obviously, with Barkley on the sidelines, he’s the main focus of the Giants offence on the ground and in the passing game. Last week, he found the endzone on 18 carries against the Redskins. This matchup against the Vikings isn’t overly hard considering they’ve allowed 94.3 rushing yards per game and the Giants should look to run some clock.

Mohamed Sanu (Atlanta)
Sanu is a good value pick considering the Falcons will probably fall behind early, much like last week. Which resulted in Matt Ryan targeting Sanu on 12 occasions. He’s yet to find the endzone in season 2019 so there’s potential for a breakout TD and 8+ targets.

Diontae Johnson (Pittsburgh)
Johnson is becoming a favourite target of Mason Rudolph’s with back to back of 6 targets and a TD in each. The Steelers have a nice matchup against the Ravens secondary that’s allowing over 300 passing yards per game and couldn’t stop the Browns in Week 4.

Tight End
Tyler Eifert (Cincinnati)
Picking Tyler Eifert is purely based on his matchup against the Cardinals D. They’ve continually given up TD’s to tight ends and hopefully that trend continues. He does have good upside as well with 5 targets in 3 of 4 games.

Defence/ST
Patriots
We simply cannot pass up on the Patriots defence in Week 5 against the lowly Redskins. Since allowing just 3 points in the Super Bowl, the Patriots D has been absolutely on fire. In 3 straight games, they have a total of 17 sacks. While in 2 of 4 games, they’ve picked off opposing QB’s 4 times. To top it off, they face the 0-4 Redskins who are experiencing question marks at the QB position. 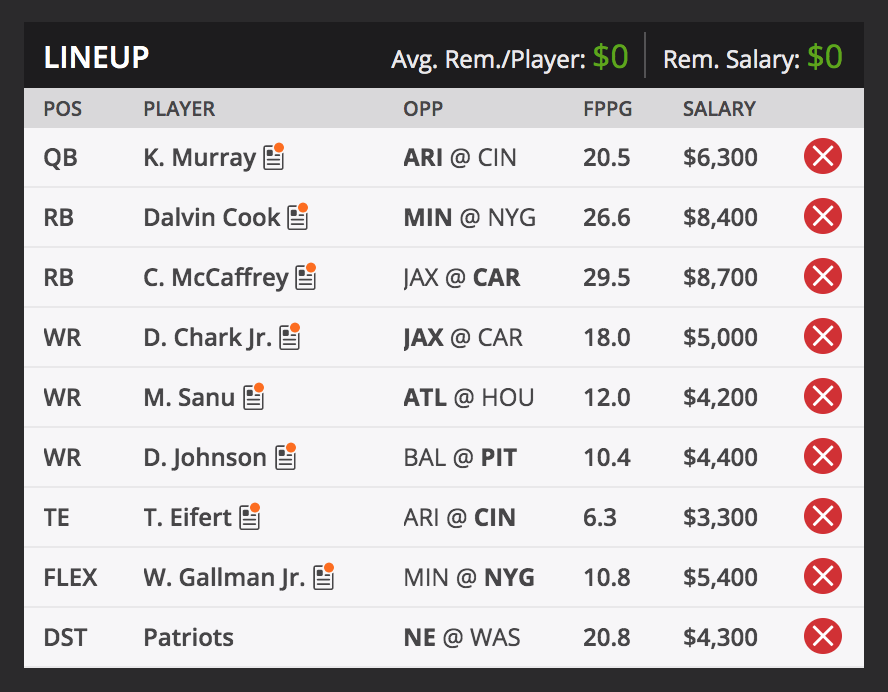 The Colts travel to Arrowhead stadium and take on the improbable task of holding the high octane Chiefs offense. With a high game total, you probably want to avoid DST selections this week. Couple of injuries to monitor including Marlon Mack for the Colts and Sammy Watkins who was downgraded to questionable after Friday practice.

The reigning MVP of the league is a big lock in single slates and a scary fade. With a high game total and injuries to the Colts secondary, you will need to pay the high salary. Will be ridiculously high owned. Just pick him and enjoy watching him go to work.

With the Chiefs scoring points quite quickly then we expect the Colts to fall behind on the scoreboard. I will expect Brissett to air the ball out and look for his WR’s in T.Y Hilton and TE Eric Ebron. But it is likely the Colts will stick to the run game and passes to RB’s in the backfield. Risky play though as Brissett has thrown over 300 yards only once this season.

This is a more game script dependant play where Hines received 6 receptions from the backfield last week. If the ball is passed more than last week we could see some cheap checkdowns to Hines. Marlon Mack is still the RB1 on Sunday night but Hines is pretty cheap on Draftstars.

Hilton is still questionable and is likely a Game Time Decision. Even if he does suit up, the Chiefs secondary are actually ranked 9th in DVOA this season whilst 30th against the run. Hilton will have high ownership and I am happy to fade against high ownership. 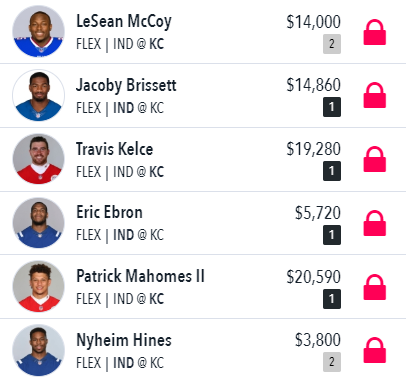 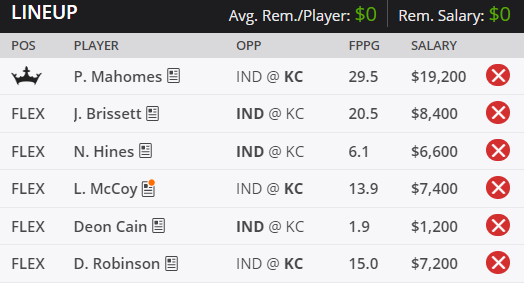 The Browns (2-2) head over to Levi’s Stadium to take on the undefeated 49ers in an intriguing Monday Night matchup. SF had the bye last week and will be looking to improve on their solid offence but exceptional defence where through 3 games they have not allowed teams to score 20+ points. The Browns whilst taking care of the Jets and the Ravens, are 3.5 point underdogs on the road. The Browns have not quite clicked in the passing game but the running game of Nick Chubb has certainly carried this team.

Whilst it would be easy to place Nick Chubb as the ‘Champ’ this week, the 49ers defence do play the run very well, so this leads to Odell Beckham. Most targets from Baker Mayfield this season have been concentrated to either Beckham or Jarvis Landry. Beckham however only caught two receptions last week against the Ravens and is primed to bounceback against the 49ers. The ideal CB to cover OBJ in Ahkello Witherspoon is out and I can’t see how the 49ers secondary shutdown Beckham.

The Browns secondary are thin as well with injuries to starters in Denzel Ward and Greedy Williams, with reports suggest they are not expected to play. So this could lead to more volume towards the 49ers receivers including Samuel and Dante Pettis. Whilst WR1 Marquise Goodwin is cheaper across the sites, Samuel has more TD/big play upside.

With Tevin Coleman on track to play from his injury, we now have a “committee” of 4 running backs with Matt Breida, Raheem Mostert and Jeff Wilson rotating all of the work. If I was to avoid one it would be probably be Mostert but don’t be surprised that fantasy production is stunted for all 4. 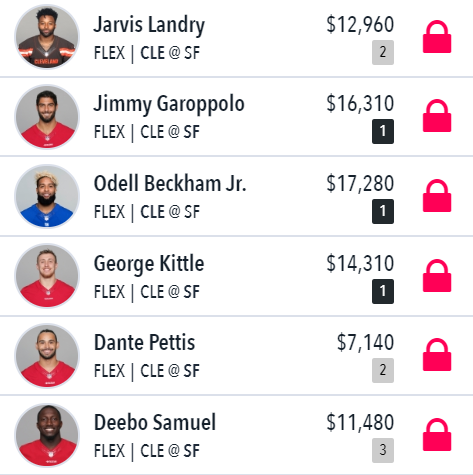 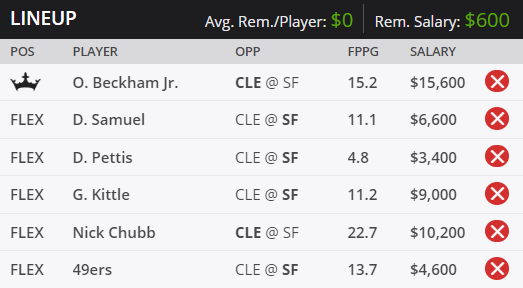