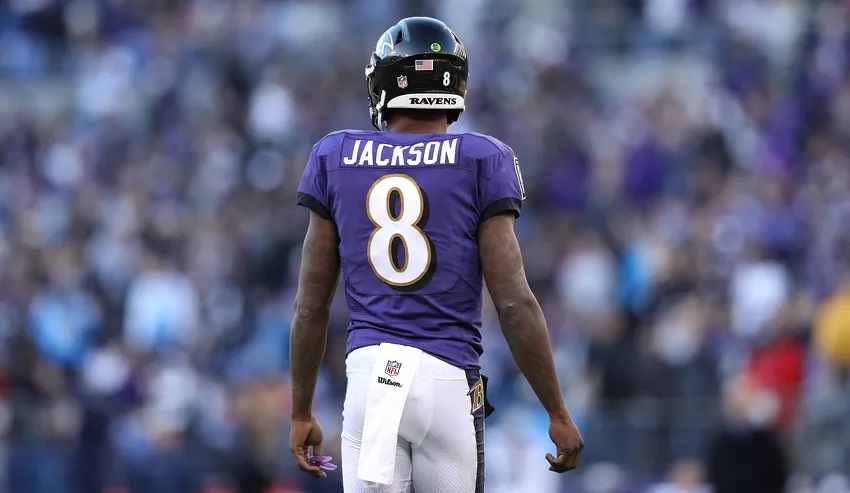 Another week in the NFL, another fantastic slate of daily fantasy tournaments to look forward to with a bunch of prizes up for grabs at Draftstars, Moneyball and DraftKings this weekend!

The Giants are up against the juggernault of the New England Patriots with Vegas giving the Giants a 16.5 start on Thursday Night. The Giants are depleted unit with Evan Engram (TE), Sterling Shepard (WR) and most importantly Saquon Barkley (RB) all inactive for the Giants. Also keep an eye out on the weather, the forecast is for gusty winds so that may limit the passing capabilities of both Quarterbacks.

The Patriots running back finally came to the party in 2019 last week against the Redskins with a 21.3 point performance. Michel had over 120 all-purpose yards and a rushing touchdown in the win and should feature prominently against the Giants this Friday morning.

The Giants allow 130 rushing yards and 25 points per game, both numbers are in the bottom 10 in the league. We expect the Patriots to be playing in front from the beginning so the run  game should be the key focus for the Patriots.

Tate returned to the Giants line-up last week after serving his four game suspension to start the season. Didn’t set the world on fire with just three catches for 13 yards but should continue to improve with more match fitness under his belt.

As we mentioned above, we expect the Giants to be playing from behind for the majority of the game, so the play calling should favour the pass heavily. In three career games against the Patriots, Tate averages 71 receiving yards per game and 13 yards per catch. Having Sterling Shepard out as well may see a bump in his production.

Staying away from the Giants third string running back this week for a few reasons. With Barkley and Wayne Gallman inactive for this match-up and the short turn around from Sunday game, I cannot see much work/fantasy production at all from Hilliman.

There’s also the issue of the Patriots run defence. They have allowed just 78 rushing yards per game, the third fewest of any team in the league and have allowed just two rushing touchdowns through their first five games.

10 games make up the main slate on Monday which features a monster millionaire maker at DraftKings as well as some fantastic prize-pools at the Australian daily fantasy sites. The first game of the day which sees Carolina facing Tampa Bay in England is excluded from the slate.

Catch our team of the week for the main slate below!

Quarterback
Lamar Jackson (Baltimore)
Lamar Jackson has been one of the best quarterbacks in the league through the opening five weeks of the season, averaging 26.5 fantasy points per game. He was a little quiet in Week 5 against the Steelers, throwing for just 161 yards and 1 touchdown to score 14.44 points.

Has a great opportunity to bounce back in Week 6 against Cincinnati, who have allowed just over 244 passing yards per game and eight passing touchdowns, both of which are in the bottom half of the league. The Bengals allowed 26 points to the Cardinals in Week 5.

Running Backs
Todd Gurley (Los Angeles Rams) / Malcolm Brown (Los Angeles Rams)
Love the look of the Rams starter this weekend after he has found some form over the last few weeks. Has racked up 16+ touches over the past two weeks and found the end-zone four times, averaging over 22.5 points per game. The 49ers looked good against the run on Monday night football vs the Browns but we expect this to be more of a shootout in Los Angeles. UPDATE - Todd Gurley is out with a Quad Injury. In his place at RB1 is now Malcolm Brown who is projected to be one of the most value plays but alas will one of most chalky as well. Brown has been servicable and should exceed value in the Rams rushing/passing game.

Chris Carson (Seattle)
Might be the No.1 picked running back this week with Christian McCaffrey not in the slate, and for good reason. Carson has had 20+ point performances the last two weeks in a row and has a fanastic matchup against the Browns this weekend, who were deplorable against the run on Monday night football vs the 49ers. They allowed over 270 rushing yards and two touchdowns.

Leonard Fournette (Arizona)
With the Jags now -1 favourites after opening up as underdogs, we get Leonard Fournette at a cheaper price than the feature RB's on the slate. Fournette has been playing on pretty much every snap and faces a Saints defence that has been average in this year's statistics.

Wide Receivers
Amari Cooper (Dallas)
Cooper was dominant in Week 5, racking up 226 receiving yards and a touchdown for a monster score of 42.6 points. Has a great matchup against the Jets this weekend, who have allowed over 25 points per game this season and over 260 passing yards.

Will Fuller V (Houston)
Fuller was the highest scoring player in Week 5, racking up a monster score of 53.70 with 217 receiving yards, 14 receptions and 3 touchdown passes. This matchup against Kansas City on Monday morning promises to be an absolute shootout between two of the more dynamic offences in the league.

Jamison Crowder (New York)
Opting for Crowder as the cheaper option at receiver this week after some disappointing results over the last few weeks. Was excellent in Week 1 with a 24 point performance and we are hoping he can return to that form with a decent matchup against Dallas which should be a high scoring game. Sam Darnold also looks likely to return as the Jets starting QB, giving more viability to the passing game.

Tight End
Mark Andrews (Baltimore)
We are pairing Lamar Jackson with Mark Andrews this week despite the tight end battling a foot injury. He still managed seven targets and has been the most targeted Raven by Jackson so far this year.

Defence
Dallas Cowboys
Opting for the Cowboys defence this weekend going up against what has been a pretty lacklustre Jets offence over the past few weeks. We expect the Jets to be playing from behind so there is plenty of opportunity for takeaways regardless of the Jets starting quarterback. 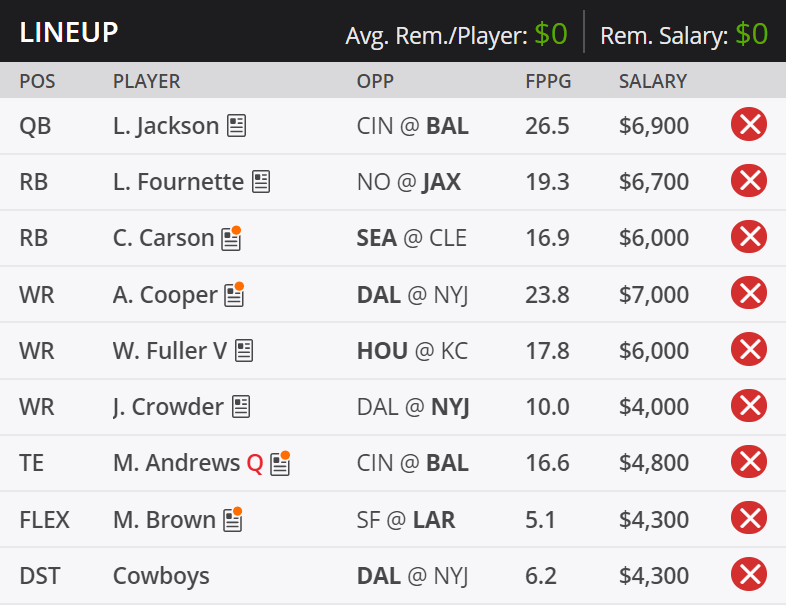 The LA Chargers are 7 point favourites at home against the Steelers, who are now on their 3rd String Quarterback in Devlin Hodges after Mason Rudolph has been ruled out with concussion. Not sure the Steelers offense will be able to generate points to go with LA but however, the Chargers defense is a very low ranked 25th in the league against the run.

Through 5 weeks The Steelers have allowed the most PPR points per game to receivers in the slot and this is where Allen lines-up for a smash spot. Since his Week 3 explosion, Allen has been well held with only 9 receptions for 76 yards in the previous 2 weeks.

With injury to fellow RB in Jaylen Samuels, Conner is going to get plenty of looks either on the ground or through the air for the Steelers. What could curb production is that the Steelers are only projected for 17 total points and could see the Chargers controlling time of possession this is matchup.

Do not expect the stars here but Henry is back after suffering a fractured tibia back in Week 1. His involvement will be monitored but there is potential for Redzone opportunities. Bare minimum on Draftstars but appropriately priced on DraftKings may mean you need to look elsewhere for your cheap play on DK.

Not really fair fading a 3rd string Quarterback but apart from his 7 for 9 passing last week, we do not have a gauge on Hodges fantasy output. Would probably want to see how Hodges goes in his 1st start but the Chargers secondary are one of the league’s best. 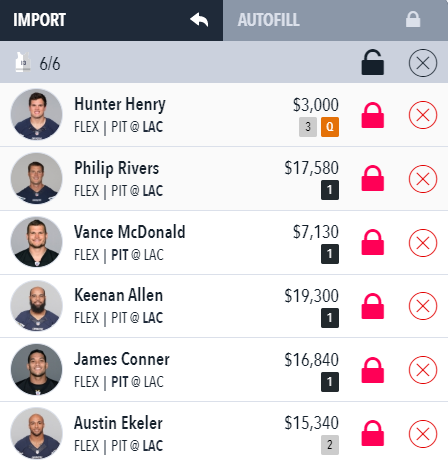 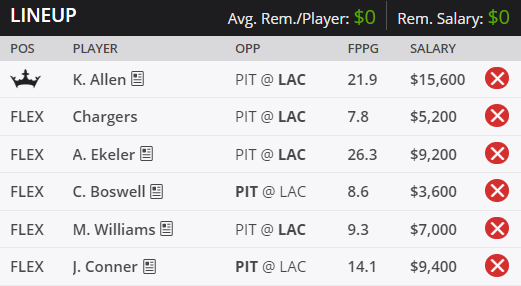 Tough fantasy matchup at Lambeau Field where the Packers host the Lions in an NFC North rival match. Green Bay are 4.5 favourites to Detroit who had the bye last week. Green Bay are missing WR1 Davante Adams who has Turf Toe. WR3 Danny Amendola is questionable with a chest injury. The Packers have scored a good amount of points in the last three games averaging 32 points, whilst the Lions did have the lead against Kansas City last week in the 4th quarter but ultimately losing 30 to 34.

I am avoiding both Quarterbacks in this matchup and concentrating on the Running Backs for either team. Aaron Jones had a massive day out at Dallas scoring 4 TD’s and whilst fellow RB in Jamaal Williams should be back, Jones should get all the work he could get in an offense that is prioritising the run.

Johnson rushed for 125 yards in Week 4 and comes up against a Packers defense that is struggling to contain Running Backs (last 3 RB’s Elliott 1TD, Howard 2TD, Lindsay 2TD). Whilst the game script may go the way with the Lions trailing, I expect Johnson to remain active on the Lions playbook regardless on what the scoreboard says.

Tough to find value this week with most players on the field, but with Adams out with injury we can take a punt on Allison. Only 2 TD’s for the season but Rodgers hasn’t need to throw for touchdowns with Aaron Jones rushing them instead. If you do have the salary, upgrading to Marquez Valdes-Scantling is a safer option.

Golladay has been the focus of the Lions offence scoring 4 TD’s for the year but remarkably only 8 receptions is the highest in a game for the year. Golladay is up against top CB in Jaire Alexander who is looking to bounce back after letting the Dallas receivers shine late last week. This adds up to a small fade but it is a tough call this week. 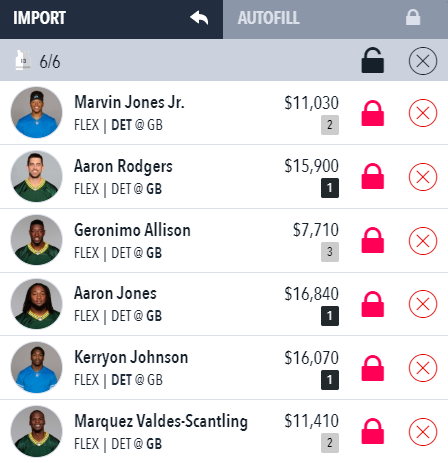 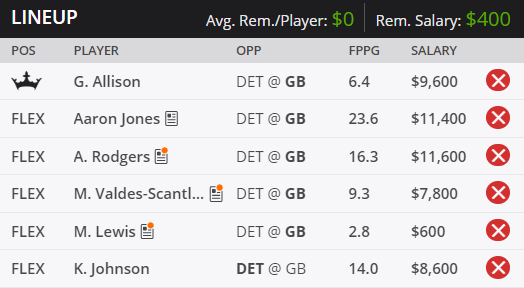