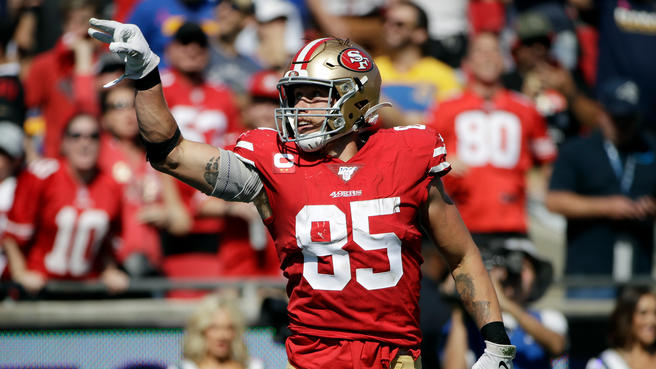 NFL Week 9 is approaching and all the biggest daily fantasy sites around Australia and abroad are offering some more fantastic prize pools for the weekend’s action! As usual, a millionaire will be made at DraftKings this weekend in the feature tournament and there’s plenty more great contests on offer.

We have a full daily fantasy preview for the Week 9 action in the NFL below.

Tough call here between Coleman and Kittle but the Cardinals D has struggled with Tight Ends all year. Over 8 games, they've allowed 54 catches, 702 yards and 8 touchdowns to the TE position. Kittle hasn't scored a TD in the last 3 weeks but his target share still remains high and should enjoy this favourable matchup.

The Cardinals backfield is a mess at the moment. David Johnson has an ankle complaint and probably won't play. Chase Edmunds has a hamstring problem and is listed as doubtful. Drake will be happy to be out of Miami after his recent trade and should step straight into the #1 RB position for the Cardinals. The 49ers have given up 100+ rushing yards in the last 2 weeks so it's a pretty good matchup.

The rookie has slowed down in the last 2 weeks and it won't get any easier against the 49ers elite defence. Nick Bosa had 3 sacks and an Int against the Panthers last week. Over the course of the season, they've allowed just 5 touchdown passes and a total of 2 fantasy points to Quarterbacks in their last 4 games! Happy to fade Murray here.

With Joe Flacco on the sidelines, Brandon Allen takes over for the Denver Broncos and offers a great value pick at QB. He gets a favourable matchup against the Browns pass D that's allowed 14 passing touchdowns and 20+ fantasy points in 4 of 7 games this season.

With Allen at QB and a cheap DST, we can spend the extra cash on the beast that is McCaffrey. In a tough matchup against the 49ers last week, he rushed for 117 yards and a score. At Draftkings, he has a ceiling of 50.7 points and has only fallen below 20 points once in 7 games.

Jones continues to be a treat in the passing game for Aaron Rodgers and that shouldn't slowdown against the Chargers. The Bears totalled 147 rushing yards in Week 7 against LA and the Chargers D has allowed an average of 24.75 fantasy points to RBs in the last 4 weeks.

Tampa Bay and Seattle looks like it'll be a shootout so Mike Evans should continue his red-hot form. Against the Titans last week, he recorded 198 receiving yards on 12 targets and found the endzone twice. Seattle gave up 303 passing yards against the Falcons and Julio Jones last week as well.

Another potential high scoring game worth targeting should be the Lions at the Raiders. Raiders WR Tyrell Williams returned from injury last week and immediately made an impact with 3 catches, 91 yards and a score. He's found the endzone in every game he's played this season and the Lions have allowed multiple receiving touchdowns in the last 2 weeks.

On the flipside, Amendola is a nice play for the Lions in this expected shootout in Oakland. He's coming off back to back games of 8 receptions with 200 total receiving yards. So he offers a good floor and a nice ceiling if Stafford can find him in the redzone. Raiders have given up 10 receiving touchdowns in 2019 so there's every possibility.

As mentioned, the Lions and Raiders clash is worth targeting and Hall is worth a risk at his price. He's scored over 6 points in his last 4 games at Draftkings and found the endzone on a 49-yard reception last week.

Henry continues to be a huge factor in the Chargers passing attack and he gets a favourable matchup against the Packers. They've given up 4 touchdowns to Tight Ends in the last 2 weeks. Henry has a ceiling off 33 points as well.

It's a tough DST slate without the Patriots or 49ers so the cheapest DST team in the Redskins is a worth a look. Despite a poor season for the Redskins, the defence has been very good lately. They've also scored well in fantasy with a ceiling of 10 points against Miami and a low of 5 points in their last 6 games. 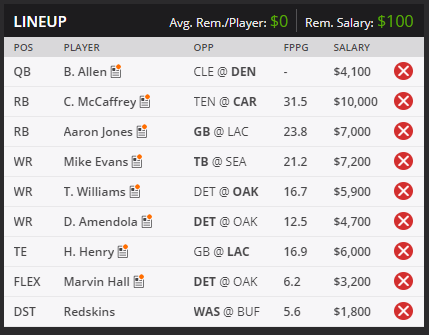 While the Patriots D has been elite at takeaways (19 interceptions) and defending the pass (148.8 passing yards allowed), Lamar Jackson should have success in the running game. Last week, Browns RB Nick Chubb carried 20 times for 131 rushing yards. Jackson is a defensive nightmare and he'll test the New England linebacking core all game. He's coming off back to back games of 100+ rushing yards and 2 total touchdowns. The Patriots have also faced a similar QB in Week 4 when Ryan Allen found the endzone on the ground.

To be fair, Dorsett isn't hugely cheap but it's slim pickings for value in this contest. The Ravens WR and TE positions have a tough matchup and the Burkhead is still dealing with a foot issue. Dorsett is an up and down fantasy player but the key is, Tom Brady does trust him especially in the redzone. He has 4 touchdowns on 21 catches this season and has totalled 10 targets in the last 2 weeks. The Ravens pass D gave up 212 receiving yards and a touchdown last week so hopefully, Dorsett can get into the endzone.

White is a model of consistency in this New England offence. The only thing holding him back is a lack of touchdowns. At Draftkings, he hasn't fallen below 11.9 points all season and continues to be a favourite target of Brady's out of the backfield. If he can find paydirt, White should finally score 20+.

Ingram has slowed down in recent weeks mainly because 2nd string RB Gus Edwards is taking carries. Over the last 3 weeks, he’s averaging under 4.0 yards per carry and rarely features in the Ravens passing game, not that Baltimore are known for passing the ball. So it's tough work for Ingram to hit value since he'll need to find the endzone, especially since the Patriots have not allowed a rushing TD to a RB this season. 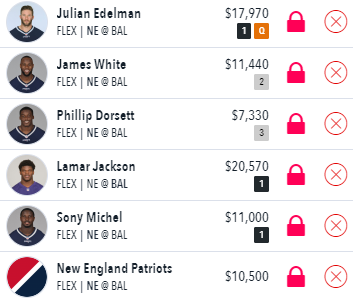 After holding out in the preseason, Elliot looks in peak form now and will continue to see plenty of action against the Giants. He's coming off back to back games of 100+ rushing yards against the Eagles and Jets. In terms of touchdowns, he's found the endzone in all but one game. The Giants run D gave up 3 rushing touchdowns recently so Elliot could carve them up for a season-high score here.

The veteran TE has slowed down since the early season but he still continues to be a treat in this offence. He's consistency finished with 4 targets in 6 of 7 games and had a season-high of 7 against the Jets a few weeks ago.

Cobb's only TD catch of the season came against the Giants in Week 1. The Giants pass D gave up 3 WR touchdowns last week and 289 receiving yards. So if Dak Prescott spreads the ball around, look for Cobb to find plenty of chances to get back into the endzone.

Tougher matchup here for Daniel Jones after his 4 touchdown performance against the Lions. The Cowboys D allowed just 191 yards against Wentz last week and he lost 2 fumbles under the Cowboys impressive pressure. Over the last 2 weeks, Jones has lost 3 fumbles and has actually played better on the road. So Dallas will be hunting turnovers and it'll likely be hard for Jones to hit value. 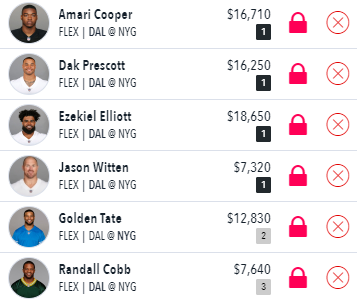