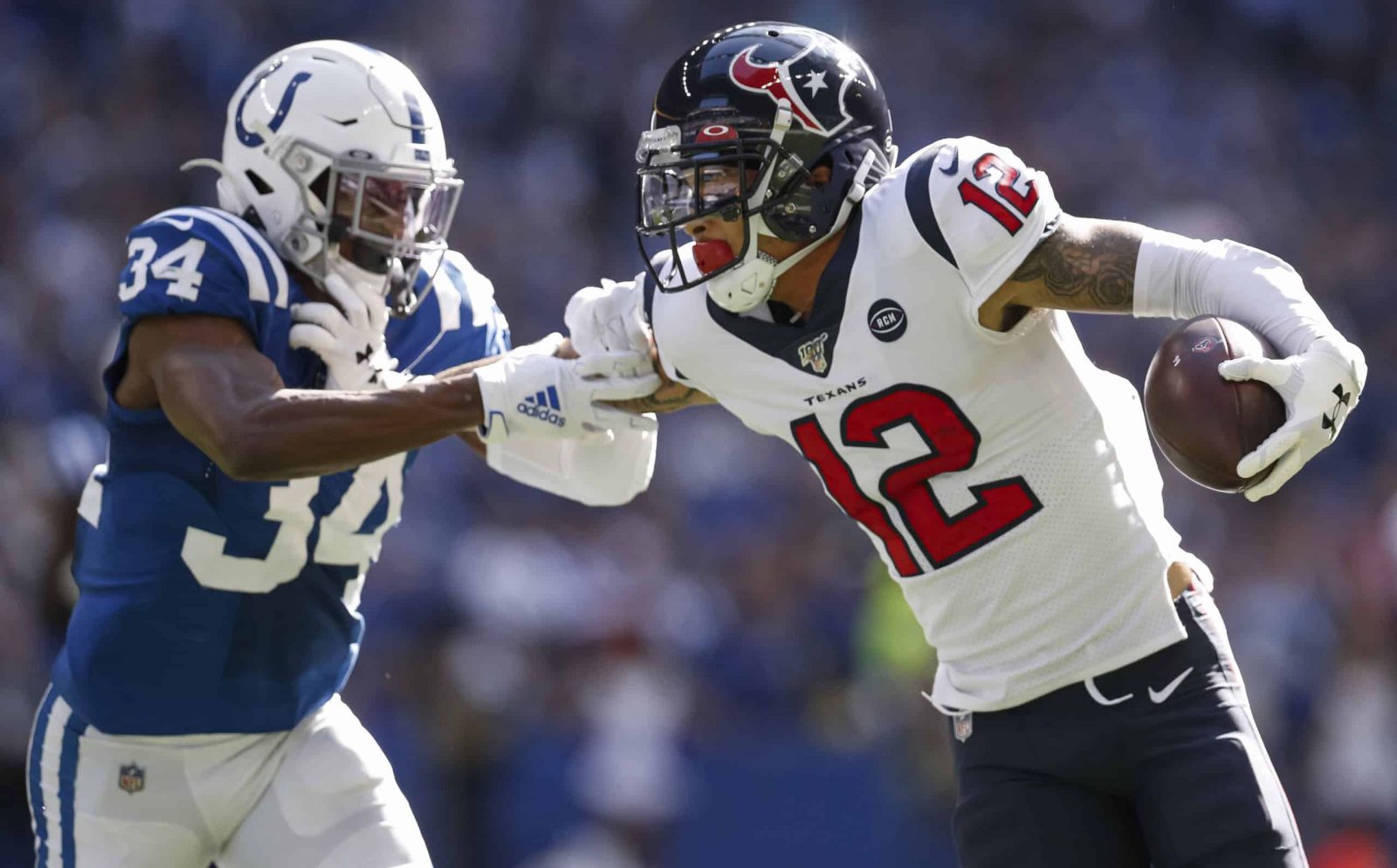 The 2019 NFL season is in full swing and the daily fantasy sites in Australia continue to embrace America’s number one sport. Week 12 gets underway on Friday morning with the Colts taking on the Texans and as usual Draftstars, Moneyball and DraftKings have some great feature tournaments on over the weekend and we run you through all of them in our fantasy preview below. 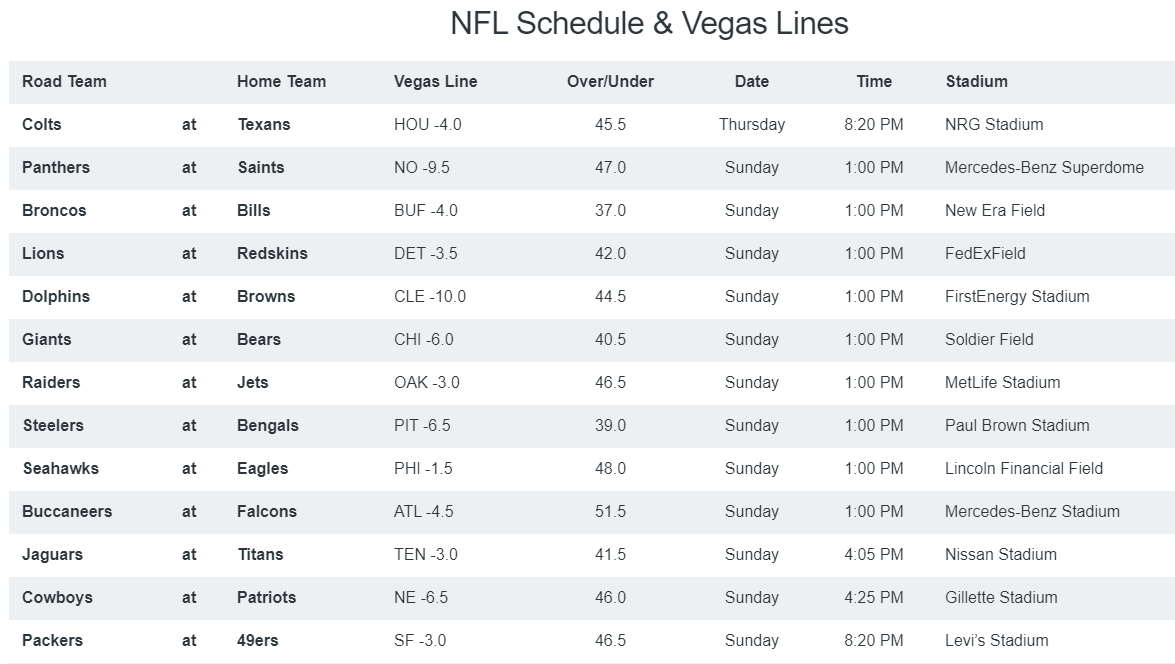 In an exciting week of match-ups for Week 12, we start with a Thursday night clash between playoff contenders Indianapolis and Houston. In injury news, RB Marlon Mack for the Colts has been ruled out with a Hand injury and it is unlikely that WR T.Y Hilton will return from his calf injury. TE Eric Ebron is also trending towards being out with an ankle injury. For the Texans WR Will Fuller is a Game Time Decision with his recovery from a hamstring injury.

With the Ravens shutting down the Texans offense in Week 11, this is a great bounce back spot for Watson. Watson only completed 16 passes last week for 169 yards only so the only way is up from a fantasy point of view. Unfortunately however, Watson is the most expensive player on the slate and will require a significant score to pay off the salary.

Like Watson last week, the Ravens did a number on the Texans in Week 11 which limited Hopkins to only 8 receptions for 80 yards. Last time Hopkins eclipsed 20+ Fantasy points was back in Week 8. The Colts passing DVOA ranking of 10th this season puts Hopkins at a tough spot but can explode for slate winning scores.

If Eric Ebron does become inactive then Doyle is a fine plug and play at a cheap salary. Did have a duck egg in Week 11 but did score TD’s in Week 9 and Week 10. If Ebron does suit up, he is comparable at the same salary on DraftKings with Doyle.

With Marlon Mack now injured, we now have 3 RB’s for the Colts now sharing by committee. Jonathan Williams, Nyheim Hines and Jordan Wikins will share the load but Hines should be more active in the passing game. I will be avoiding the RB’s for the Colts as the upside is low here.

The Falcons are a new team since their Week 9 bye with massive wins against the Saints and the Panthers. Matt Ryan has quietly righted the offense by limiting his turnovers and now gets to show off against the 32nd ranked passing defence in the Buccaneers. Indoors with a 51.5 slate high total means I want shares in Ryan.

The Rookie Running Back looks to have a favourable match-up against a Seahawks team that leaks RB touchdowns. With fellow RB Jordan Howard questionable with his shoulder injury and Jay Ajayi only recently signed, we should see Sanders take the majority of the snaps this week.

Targeting the weak Dolphins run defence this week and we can pay up to roster Chubb who is having a great season with the Browns. Although he hasn’t scored a TD since Week 6, Chubb should get plenty of opportunity along with Kareem Hunt to overpower this weak Dolphins team.

Whilst not the fantasy beast he was at the Steelers, Bell has crafted out a solid fantasy production at the Jets. Bell is always a Redzone presence and is still involved in the passing game. The match-up with the Raiders has a high 48.5 and has the potential to break out into a shoot-out.

Pairing Jones with Ryan as the feature stack, Jones will be the main target in the shootout with the Buccaneers. Like last season, Jones can go on long streaks without scoring a TD and Jones hasn’t scored a TD since Week 3. If there was a time to break the duck, it is this week against the Bucs. Have confidence that more than 1 TD is capable here.

With RB James Conner and WR Juju Smith-Schuster injured, Washington should come the focus of the Steelers offence against the hapless Bengals. The low total is a concern but there are not many options left for the Steelers to target.

Patrick is at the minimum on DraftKings but has the opportunity to establish as the WR2 for the Broncos with the recent trade of Emmanuel Sanders. Caught 4 balls for 77 yards against the Vikings last week. Just monitor team news as Patrick is listed as "Questionable" with a shoulder injury.

Like Washington, McDonald should see more production with the injuries to main offensive weapons of the Steelers. Has played a minor role this season by not going over 40 yards all season but that could change against the Bengals.

Pairing Chubb with the Browns defence is the safe play here with a 10 point spread against the Dolphins. 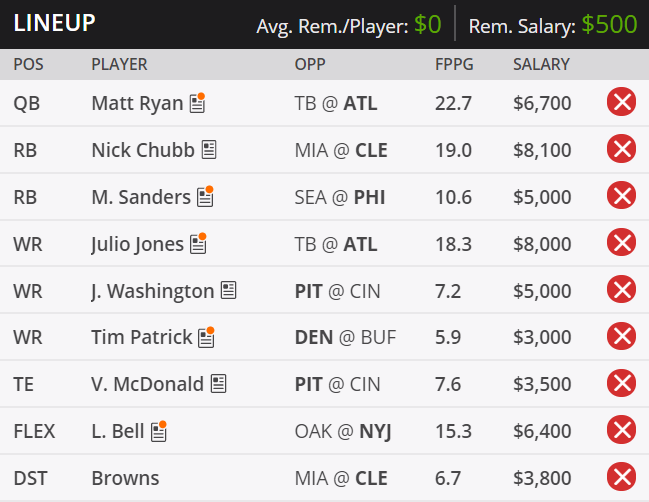 In another great prime-time matchup, the Green Bay Packers travel to San Francisco to take on the 49ers. A small edge to the 49ers from Vegas, so expect a tight contest. The 49ers should be at full strength with WR Deebo Samuel, TE George Kittle and WR Emmanuel Sanders on track to play. Although RB Matt Breida has not practiced all week and is Doubtful. The Packers core attacking players are all good to go.

I could make cases for George Kittle and Davante Adams as the “champs” but Jones’ 14TD’s (11 Rushing and 3 Receiving) for the season has Jones right up there as 1st picked. The Packers like to keep Jones active by running drives at a slow pace and receives plenty of redzone opportunities. If the Packers can lead or stay close then I expect Jones to rack up the yards.

With Matt Brieda unlikely to play, Coleman who has been quiet since his 4 TD explosion in Week 8, should get a great opportunity to perform against a low ranked run defence. But with pieces of the 49er offence (Kittle, Samuel) likely Redzone targets, Coleman may take a back seat on Redzone opportunities.

Not many value options with both teams to be at full strength but Lazard will be a popular value option with the Wide Receiver averaging 5 targets in the last two weeks.

This is an exceptional passing defence and these two receivers targets have been low especially Allison who has been overtaken by Lazard. MVS however could go off with a big play but alas hasn’t scored a fantasy point in over 2 games. 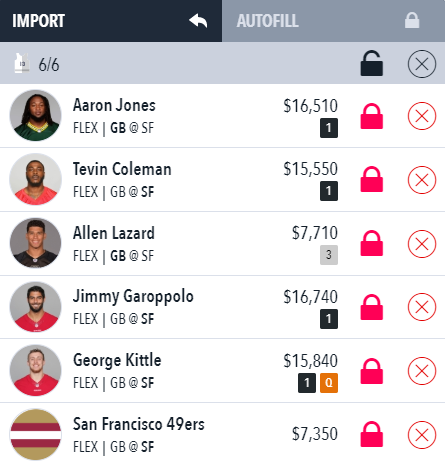 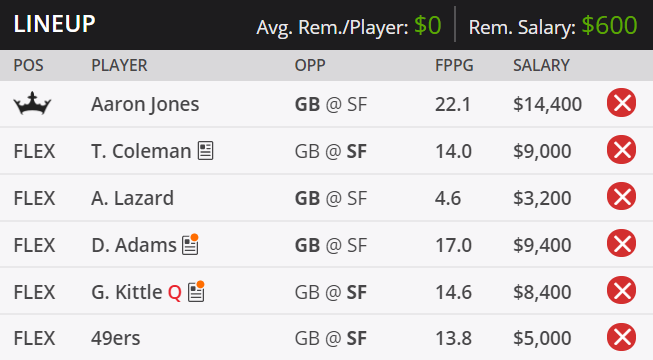 Another huge prime-time matchup between the hottest team and Quarterback in the NFL, the Baltimore Ravens (QB Lamar Jackson) heading to the Coliseum to take on the Rams in Los Angeles. The Ravens are road favourites but they do come up against a Rams defence that is 3rd against the run in the league and possess a quality Cornerback in Jalen Ramsey. The Rams were serviceable last week against the Bears only scoring 17 points in the win, leading to some woeful numbers from QB Jared Goff in the past two weeks (Week 12 11/18-173-0TD-1INT & Week 11 22/41-243-0TD-2INT). In team news it is a clean bill of health for the Ravens and we should see Brandin Cooks return for the Rams from his concussion.

The league’s number 1 rushing Quarterback costs a significant amount of your salary on the DFS sites this week. So much so, you will need an exceptional performance to obtain value. But with Jackson not going under 20 FP’s since Week 5 against the Steelers and if you can afford him, then barring injury, Jackson is a great source of Fantasy Points. The Rams however do stop the run which may cause Jackson to throw more often than his stats would state.

With WR Marquise Brown likely to have a hard time against CB Jalen Ramsey, we should see more targets come to TE Andrews who has seen plenty of production from Jackson. Would be disappointed if we didn’t get at least 6 receptions.

On a slate with no real standout value options for either team, just going to throw a dart at TE Nick Boyle. Boyle has had 12 targets in the past three weeks and does have upside for Redzone activity. The problem however is that Jackson threw to 9 different targets last week! Tough to nail a cheapie here

Whilst it is easy to lump Goff in his current slump, he has had to deal with factors including a non-exist Todd Gurley (however he is trending upwards), Cooks being out with Concussion and Cooper Kupp not quite the same from his knee injury. The problem is that the Ravens secondary are elite and are holding teams to low scores. Have your expectations low if you are rostering Goff. 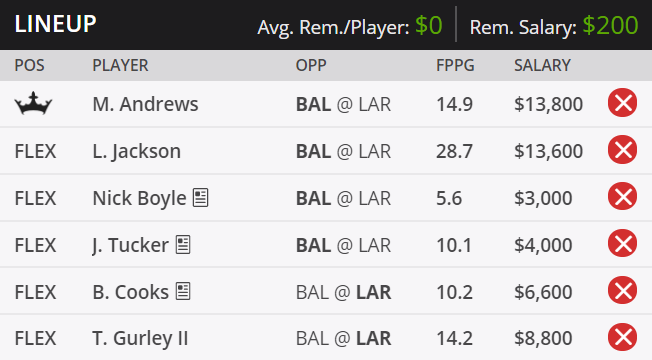 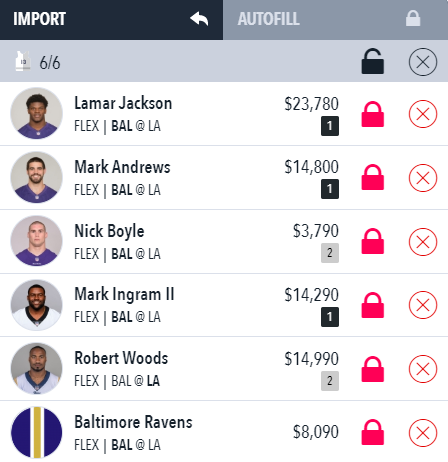