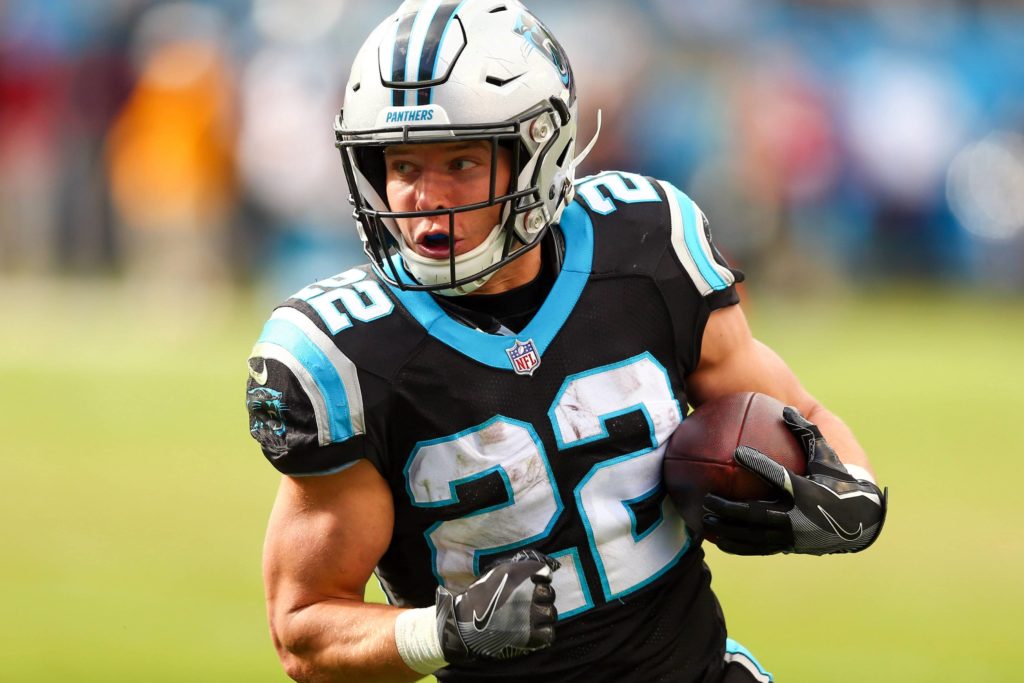 The 2019 NFL season is now in the latter stages of the season and the daily fantasy sites in Australia continue to embrace America’s number one sport. Week 13 continues after Thanksgiving and as usual Draftstars, Moneyball and DraftKings have some great feature tournaments on over the weekend and we run you through all of them in our fantasy preview below. 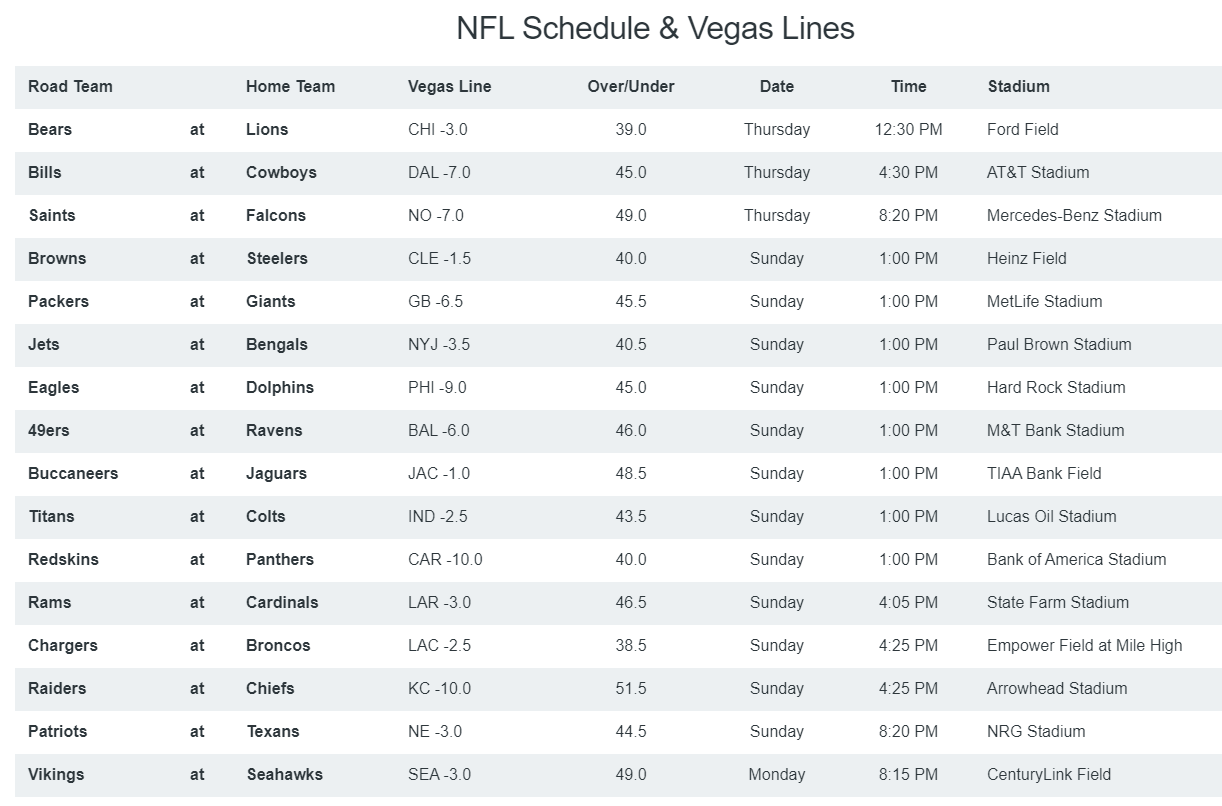 Whilst there are great options at the higher end of the tree, I am going to attack the Tampa Bay passing defence by selecting Nick Foles. Since returning from injury Foles has been under the pump losing to the Colts and the Titans. But what is encouraging is that Foles has attempted 95 passes in those two weeks. If this game gets out of hand with a 48.5 total then Foles should drive a lot of production.

The star fantasy player in the league is just an automatic pick regardless what salary is posted. Match-up proof and facing a pretty bad Redskins team. Just get him in.

With Marlon Mack out again this week, Williams had a solid game in Week 12 and has made the starting role his own. Has rushed for over 100 yards in Weeks 11 and 12 and at his salary should get 20+ attempts.

More of a value play where the RB2 receives more targets from the backfield than rushing. The Packers are 6.5 favourites in New York and we may see a bump in game time if the Packers get out to a big lead in this contest.

Pairing Foles with Chark who has a massive ceiling but a non-existent floor. Last week only received 5 receptions for 38 yards but back in Week 11, Chark exploded for 2 TD’s and 104 yards against the Colts. Boom or Bust but this is the Buccaneers which is more likely to be Boom.

Having another piece of the Jags/Bucs match-up by running back with Mike Evans. Unable to get the savings to get to Chris Godwin but Evans can certainly get hot if this game gets out of hand. If Winston goes to Evans more, then happy days.

Hurns was questionable with an ankle injury, but is now clear to team up with Ryan Fitzpatrick at QB. 9 point dogs means that the Miami passing game will get alot of us catching up with the Eagles.

Doyle is the Cheap TE we all need this week. Fellow TE Eric Ebron is now on injured reserve leaving Doyle as the number 1 TE at the Colts. Whilst a small contributor the offence, should see an uptick in production in Week 13. 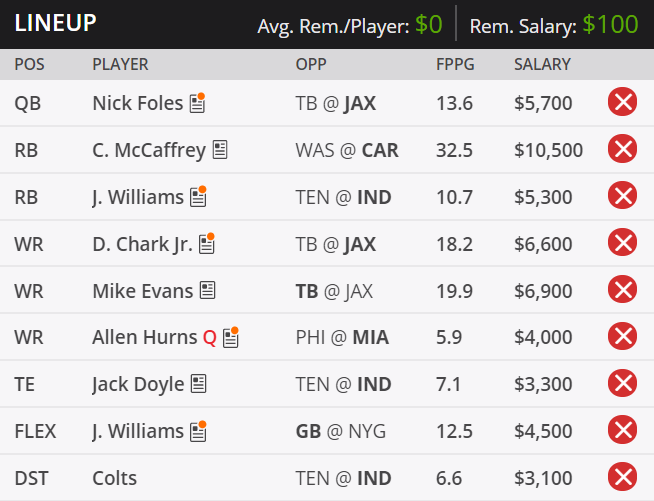 New England (10-1) travel to Houston (7-4) in a Sunday Night Football match-up that we show if the Texans are the real deal in the AFC playoff race. The Patriots ground out a win in the rain last week and now travel to NRG stadium in perfect dome conditions. In injury news, it is difficult to distinguish if any Patriot player is actually injured or not due to their injury designation so you will need to keep an eye on inactives. However TE Ryan Izzo for the Patriots is out with Illness. Whist the line is close (-3 to the Patriots) this is a really difficult spot for the Texans where the Defensive line along with the Patriots secondary really putting the squeeze on teams all season. Star duo Deshaun Watson and DeAndre Hopkins will have a hard time gaining an edge here.

It is hard to pinpoint one of Brady’s receivers or the Patriots running backs this week as all will share the load and contribute across the board. This leaves Brady as the safest and potentially the highest scoring fantasy player this Sunday night. I have my doubts on Watson’s ability to hit receivers with this secondary and also Hopkins match-up against number 1 CB in Stephon Gilmore is the hardest in the league.

Coming back from an ankle injury, Sanu along with the receiving core of the Patriots are likely to share around the targets from Brady. So we can make cases to roster Sanu, Phillip Dorestt, James White, Sony Michel etc. The list is pretty big, but let’s roll with Sanu who looked to get involved with the offence with the playoffs just around the corner.

Not much in the bargain bin this week and really do not have a recommendation on a strong play. If we need to find something here, Lecosse will be TE2 for the Patriots and could receive more snaps. With this illness to Izzo I am hopeful to get at least 3 receptions. But only hopeful.

Tough matchup for Fuller and will be highly owned in tournaments. Will need some exceptions plays to play off the increased salary. A boom or bust play but would prefer him to bust at ownership. 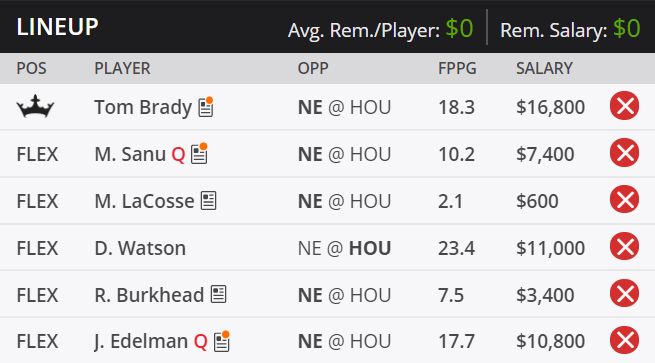 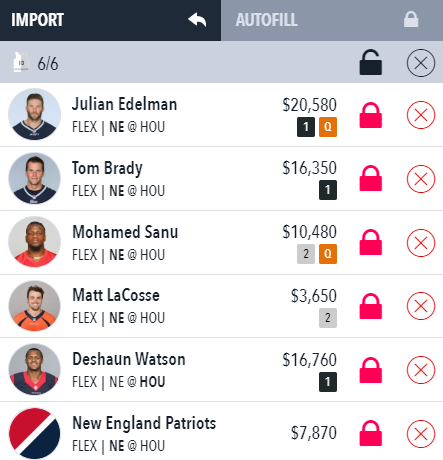 Monday Night Football has another primetime matchup between two teams that have pretty much sewn up a Wildcard spot in the playoffs but dearly love to win their divisions. The Seahawks (9-2) host the Vikings (8-3) in a predicted high scoring match where the total has been set at 49 by Vegas. For the Vikings, however, Adam Thielen hurt his hamstring during the week and has been ruled out. For the Seahawks, a fair few players had to be quarantined with illness. Only need to monitor the playing status of WR Tyler Lockett but is on track to play.

With Thielen now out and a Seahawks defence that allows the 2nd most pass attempts in the league, Diggs is on track for a mountain of work. QB Kirk Cousins has average over 280 passing yards in the past 7 weeks and I can’t see that slowing down. The only issue is that Diggs has not seen double digit targets since Week 6.

Thielen’s injury also opens up more attacking upside for the reliable Tight End. Has scored 4 TD’s in the past 3 weeks and has a great opportunity against a defence struggling to contain TE’s.

The injury theme continues and the value has opened up for Johnson to receive WR2 volume. In Week 12, Johnson caught 6 balls for 35 yards only but is pretty cheap on DraftKings and Draftstars. Obviously could be a flash in the pan but he is too cheap to ignore.

Sticking my neck out here and believing Penny’s game last week was all built on fellow RB Chris Carson having “a shocker”. The media is leaning towards Penny to continuing to be the “Hot hand” in the Seahawks running game, but we could easily see Carson returning to be the ‘main man’ in the backfield. I want to stay away from the situation and prefer to have Carson than the cheaper Penny. 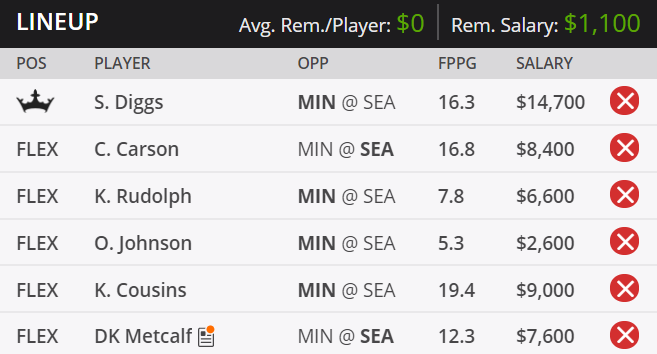 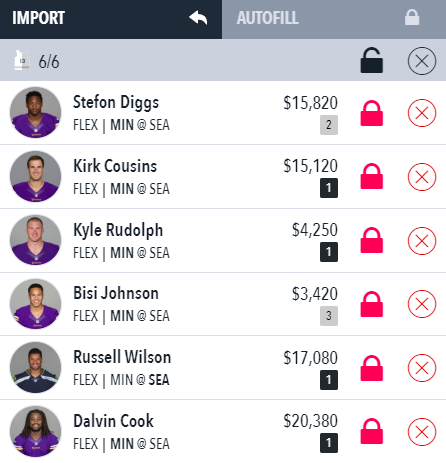