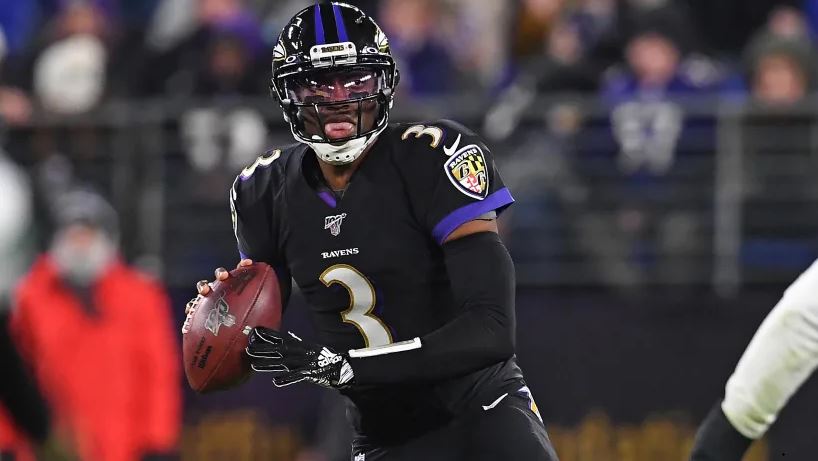 It is the final week of the NFL 2019-2020 regular season! Week 17 much like other sports has an element of unpredictability with teams resting star players, teams chasing playoff seeding and players trying to hit contract bonuses on the season. Whilst the majority of the playoff spots have been taken, the actual seeding of the teams has yet to be finalised.

The biggest daily fantasy sites around Australia and abroad are offering some more fantastic prize pools for the weekend’s action! As usual, a millionaire will be made at DraftKings this weekend in the feature tournament and there’s plenty more great contests on offer. 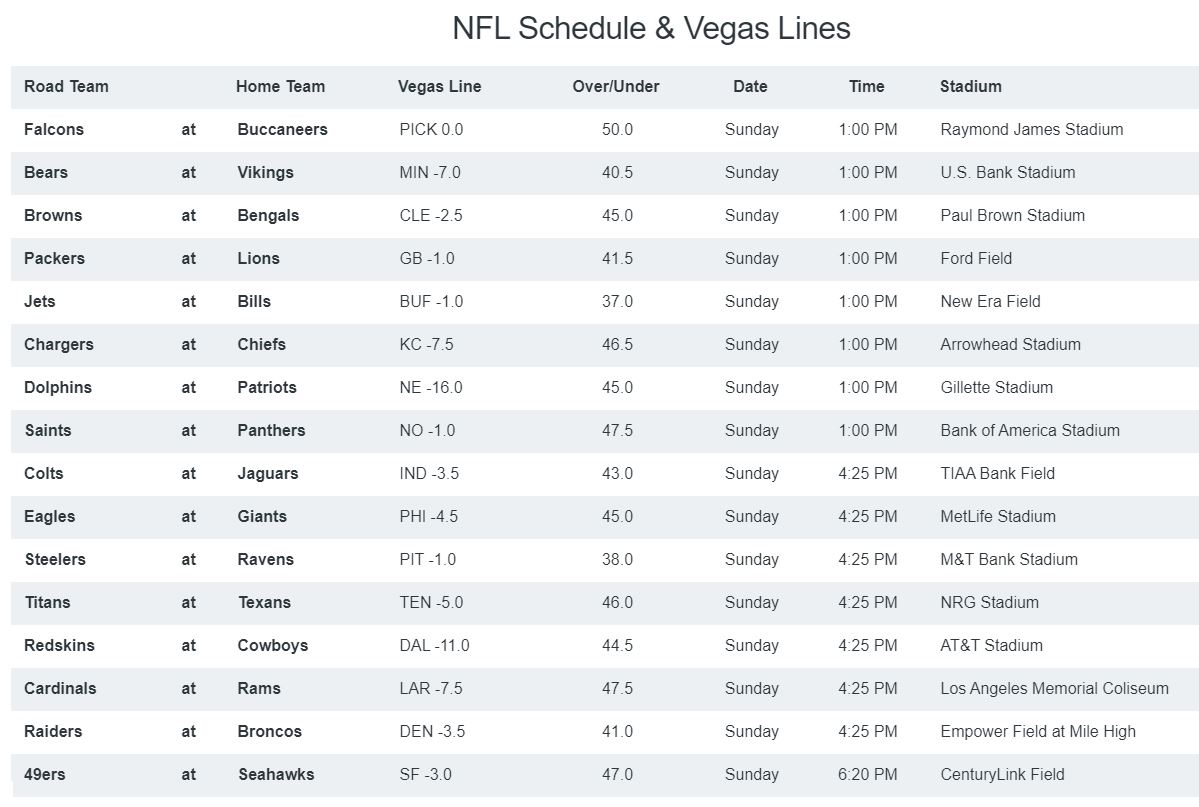 With Thursday Night and Monday Night Football wrapped up for the year, we have a bumper 15 game main slate along with a stand alone Sunday Night Football slate to sink our teeth into. As mentioned you will need to check a team’s motivation on whether star players suit up, or teams making sure they do not improve their “draft order’ for next season.

Teams that are in this “motivation” window may include”

With the Ravens locking up the number 1 seed in the AFC, Baltimore will rest QB starter and MVP candidate Lamar Jackson for the matchup against the Steelers. Griffin is just that cheap enough to get over the fact that the Steelers are an exceptional defence. If Griffin cannot get things going through the air, then Griffin’s rushing ability like Jackson’s is an asset.

Kamara has had an excellent 2nd half of the season and finally got in the endzone twice in Week 16. Facing the 31st ranked rushing defence in the Panthers (who have been woeful as of late) then Kamara could be in for a big day. The Saints can still be the 1st seed, so the motivation to play hard is still there.

With Ingram out with injury, Hill and fellow running back Gus Edwards will take the share of the carries. Hill however will be responsible for the backfield catches. This could be a sneaky play with Griffin under centre.

Noticed a bit of a trend in Week 16 when the Bears stunk it up against the Chiefs. Wims who is in for Taylor Gabriel likely to be out once again, was targeted 9 times last week! Problem was that he only caught 3 of those targets. Worth a dart when the Bears are likely to play a Vikings team who have no motivation to do anything but get injured.

Like Chubb, Adams has some individual honours motivation as he is 96 yards short from a 1,000 yard season. Green Bay need to win against the Lions to get home ground advantage so it is all systems go for a big game from Adams.

Landry had a good game against the Ravens in week 16 were he scored 14.6 fantasy points in a tough matchup. The Bengals are a much easier assignment and like Chubb will be looking to finish the season on a good note.

All to play for the Eagles who are currently above the Cowboys for the NFC East Division. Win and they make the playoffs. The chances are good as they travel to New York to take on the Giants. Was restricted against the Cowboys last week but the Giants are 26th in the league for passing. Expect a firing Ertz in Week 17. Ertz has been ruled out with injury.

Tylee Highbee for the LA Rams is a more than suitable replacement at TE after scoring 20+ fantasy points per game in the last past 4 games. 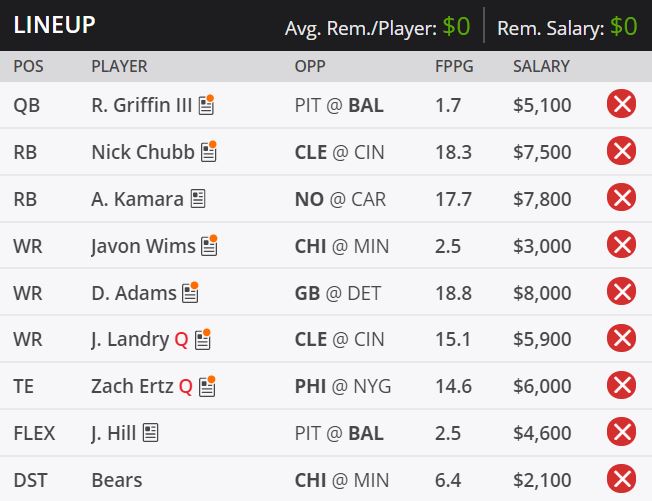 The last regular game of the 2019-20 NFL season could see some major playoff seeding implications if results from earlier in the day play out. These two teams met back in Week 10 which the Seahawks won a thriller in Overtime. Interesting news came out of Seattle with the signing off RB Marshawn Lynch who is regarded as a Seahawk great. The Seahawks have lost their three feature running backs in Carson, Penny and Prosise. The 49ers are healthy.

Kittle is clearly the number 1 target for QB Jimmy Garoppolo in this 49ers offence. Whilst he was quite in the 1st half against the Rams in Week 16, Kittle was able to record 5 receptions for 79 yards with a TD. The Seahawks passing defence is actually ranked 27th in the league so he clearly to the top pick. The problem he is the most expensive player on the fantasy slates.

Looking at Metcalf’s fantasy production last week shows a whole bunch of donuts. Only 1 target and he did not catch that target. But with Penny and Carson out for the Seahawks we should see Russell Wilson throw the ball more. Along with Lockett, the Seahawks might get really busy down the field.

The signings for Robert Turbin and Lynch this week have made the Seahawks backfield a bit of a minefield for fantasy production. But Lynch “should” play snaps but you cannot really project the amount of snaps. Bit of a dart throw but a cheap one.

Tough salary to pay for Samuel after rushing for a TD last week against the Rams but only caught 4 balls. $9,000 on DraftKings is a high salary to pay up for where value options are few and far between. 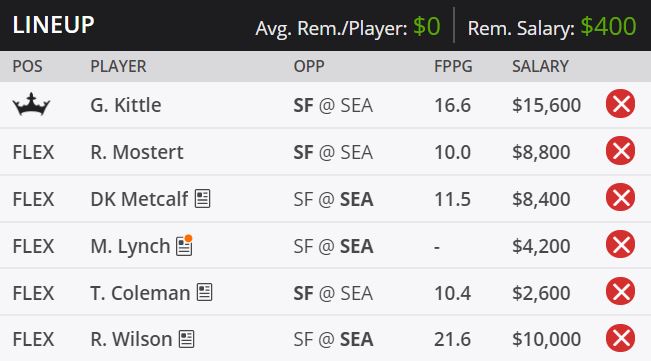