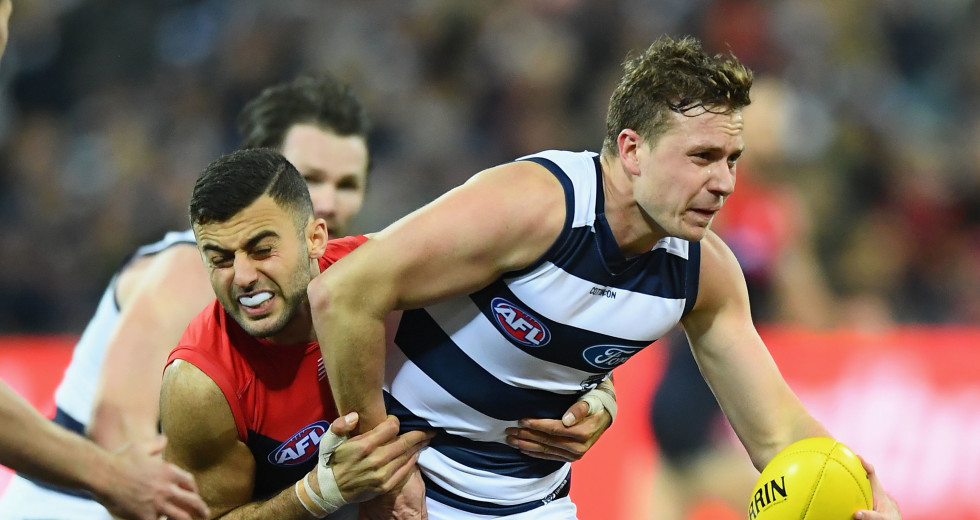 It was a bit of a tough week for us with our AFL Player Prop Bets in Round 9. We hit on only one of our three bets for the week, taking our season tally to 6/9. We now turn our attention to this weekend, which is Round 10 of the 2019 AFL Premiership Season! Find our best plays below and good luck to everyone following!

We kick off our best player prop bets for Round 10 with our first of three plays from the Suns vs Cats match at Metricon Stadium. Mitch Duncan gets the soft match-up against Suns mids who have given up the most points to opposition centres, top 3 centres, and bottom 3 centres over the past five games. On top of that, the Cats are 33.5-point favourites here and should dominate the game from start to finish. If you need any more convincing just check out Duncan’s form this season, particularly his last four games where he’s averaged 129. Duncan had 136 against the Suns last time they met and should have no trouble clearing 115.

Second up from the Suns vs Cats fixture we focus on a defender by the name of Tom Stewart. Coming off a sensational 2018 season where he was included as a back pocket in the All-Australian team, Stewart has continued to improve in 2019 and is averaging a career high in fantasy points per game (99). He also gets the soft match-up against a Suns team that has given up the fourth most points to opposition defenders over the past five games. Further, Stewart only averaged 80 last year but still managed scores of 103 and 120 in his two games against the Suns.

Our third and final play from what we expect to be a fantasy gold mine of clash between the Suns and the Cats surrounds ruckman Jarrod Witts. The Suns skipper has upped his fantasy average from 92 in 2017 to 94 (2018) and is now averaging a career high 100 this season. He also comes up against a young Cats Ruckman in Darcy Fort who allowed 24 hitouts and 100 fantasy points to Jackson Trengove against the Bulldogs last weekend. That certainly wasn’t out of the blue, as the Cats have given up the second most points to opposition rucks this season (avg 94), which is only trending up over the last five games (avg 100). Expect Witts to crack the ton on Saturday, covering his fantasy line in the process.

Another player that’s caught our attention in Round 10 is Bombers star defender Michael Hurley, who will be coming up against the Tigers in the Dreamtime match at the MCG on Saturday night. One of our favourite areas to attack is with defenders against the Tigers and we believe this week provides another perfect opportunity to do so. The reason for this is the Tigers have given up the most points to opposition defenders this year, as well as the most to oppositions top 3 defenders. Hurley’s a player that gets a lot of +6 scores in the defensive 50 and has benefitted a lot from that this year with an average of 83. Getting a great opportunity to find more of the ball against the Tigers, we have Hurley eclipsing the line that has been set bang on his season average.