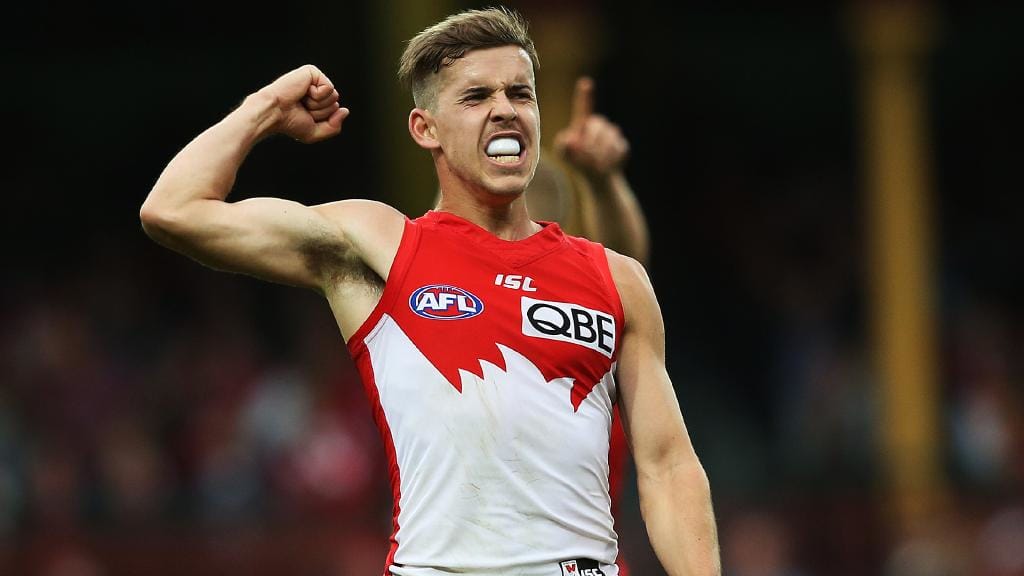 We’ve got something new at DFR this week as we introduce our AFL Player Prop Bets. We’ve been having a lot of success with our Dragon Picks that you can find at the bottom of our articles, so we’ve decided to put together some of our very best bets for each round of the 2019 AFL season, starting with the upcoming Round 7!

We’ve scoured all the markets at the major betting agencies to bring you our favourite plays in a bid to win you some extra spending money. Check out this week’s edition below and good luck to everyone following!

For reference, the graph below displays the average fantasy points each team concedes to oppostion players each week. If you want to do a bit of individual research you can check out our AFL Resources here.

Sydney accumulator Jake Lloyd has become one of the best fantasy players in the AFL and is enjoying a year with career best numbers thus far, however, you may have seen in this week’s show that we believe he will have a sub-par performance this weekend and hence, we have our first bet for for you! Jake Lloyd comes up against a Brisbane Lions outfit that are vastly improved from last season and with a game style revolves around pressure, particularly pressure against the opposition backs. On average, the Lions give up the least fantasy points to backs this season at just 57 per player, and the least to oppositions top 3 scoring backs at just 75 per player. Lloyd undoubtedly fits in the category of top 3 backs with an average of 119.2 points in 2019, but all the data suggests he’s in for a quiet one this weekend. He’s coming off a season low 85 points against the Giants in Round 6, who are the next best at limiting points to backs, only outdone by the Lions. On top of all that, we suspect Mitch Robinson might put a bit of attention into him, and it looks like it might be a wet footy on Saturday. All signs lead to Unders for Lloyd

Another player we have our eye on this weekend is the prolific Andrew Gaff from the West Coast Eagles. Gaff hasn’t missed a beat since coming back from suspension, averaging 32.8 disposals and 109.2 fantasy points per game this season. While we can appreciate that he’s coming off his quietest game of the season in Round 6 where he amassed 91 points, all signs lead to a bounce back game against the Suns in Round 7. Our data tells us that the Suns are the easiest team for midfielders to play against in the AFL. They give up a whopping 96 points per opposition mid and 117 points to top 3 mids. It’s only trending up as well, as they have given up 121 points in their last five games to opposition top 3 midfielders. Gaff is yet to play against a team in the top half for points to mids, so expect him to take full advantage of the Suns on Saturday night.

Our third and final play for Round 7 revolves around Western Bulldogs skipper, Easton Wood. We’re well aware that he’s not a great fantasy scorer, well actually he’s quite poor, however, data suggests that he should be in for one of his better games on Saturday against the Tigers. As a result of the Tigers fast-paced game plan, they give up the most fantasy points of any team and it’s not even close. They also give up the most points to oppositions backs, top 3 backs and bottom 3 backs. Their 61 points per game to bottom three backs is seven more to the nearest team in Hawthorn. Easton Wood fits the bill and will likely see a lot more of the ball than he usually 'wood' on Saturday.