The 2019 AFLW season has reached the Grand Final with Adelaide set to take on Carlton at the Adelaide Oval this Sunday at 1:00pm AEDT. The game will be broadcast live on Channel 7, Fox Footy, Kayo Sports, the womens.afl website and on the AFLW App.

It’s perhaps not the two teams we thought we’d see in the AFLW Grand Final with Carlton turning their form around from previous seasons to top Conference B, before knocking off the highly-fancied Fremantle side in the semi-final. Carlton pressured the opposition and their leaders stood up when it mattered most. Brianna Davey was a rock in the midfield, Tayla Harris was a strong target up forward, and Lauren Brazzale provided the run off half-back they have been searching for. The Blues are improving every week and after collecting the wooden spoon last season, they know they have nothing to lose after gaining an unlikely Grand Final berth.

By contrast, Adelaide have been one of the more successful AFLW sides and will be gunning for their second AFLW premiership this Sunday. They have been a dominant team all season in Conference A, demolishing contenders Melbourne and North Melbourne in the last few weeks of the season, before dismantling Geelong in the semi-final. Much has been made of Adelaide’s scoring power but their defence has been equally as impressive as Geelong didn’t hit the scoreboard until midway through the final term. Erin Phillips is undoubtedly the best player in the competition and she will lead from the front once again.

It’s hard to see anything other than a dominant win for Adelaide, although Carlton did push them when they met earlier in the season. Carlton led early but the Crows were able to gun them down late, kicking six of the last seven goals of the match to scrape home by 13 points.

Draftstars have put up a $500 Guaranteed contest for the AFLW Grand Final on Sunday, along with a $2 Mini and a range of 6-Max and Head-to-Head contests. We’ll preview some of the key players of the slate and provide a suggested lineup to help you score some cash this Sunday!

For the Forwards, you can’t leave home without Erin Phillips ($15,740) in your team. She’s had an incredible season with an average of close to 90 fantasy points and her consistency is superb. Lock her in and think about it no longer! I’ll balance her with Renee Forth ($7,010) as a cheaper option in the Forwards. She has a decent floor of around 35-40 points but can hopefully jag a couple of goals and get towards 50-60 points.

In the Midfield, it would be great to be able to afford Ebony Marinoff, but it makes it hard to fit in other players that we want to include, so we’re looking past her on this occasion. I think Brianna Davey ($12,260) is a must-pick from the Blues. She’ll be desperate to be a physical force in this final, and will throw herself into the contest. If she can’t find the ball herself, I can see her getting a bunch of tackles which is great for fantasy scoring. I’d love to squeeze Madison Prespakis into the lineup, but at the price, I’m going with the slightly cheaper Anne Hatchard ($11,860). I think leaning towards Adelaide players is the way to go as they will have the majority of the ball, and Hatchard is a great value pick in the middle of the ground. She copped a knock two weeks ago but her output was still ok last week. Her ceiling is high so she’s worth the gamble.

For a couple of cheaper Midfield options, I’m going with Justine Mules ($9,400) who is a tackling machine, and Deni Varnhagen ($9,090) who had a quieter game last week but remains under-priced.

For the Defenders, I have to include Courtney Cramey ($9,400) who has been strong over the last few weeks since returning from injury. A slightly riskier choice is Lauren Brazzale ($7,510) who has been inconsistent, but was Carlton’s best player last week with 22 disposals pushing through the midfield. If she can emulate that this week, then she’s a steal at the price.

In the Ruck division, we’re given the option of the cheaper Carlton rucks or spending up for Jess Foley ($16,930). She’s been the best ruck of the AFLW league this season and her ability to score big numbers justifies her price tag. I’m usually reluctant to spend up for rucks in women’s footy, but since the alternatives are neither cheap nor reliable, I’ll spend on Foley to round out the team.

The Dragon has also picked out a lineup for the Sunday $2 Mini - feel free to use it as a starting point for your own lineup and adjust to your liking! 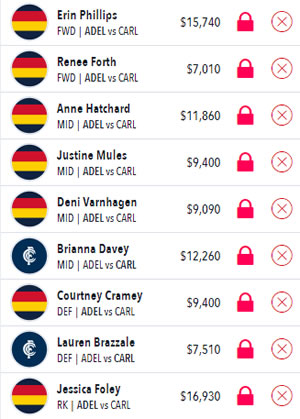