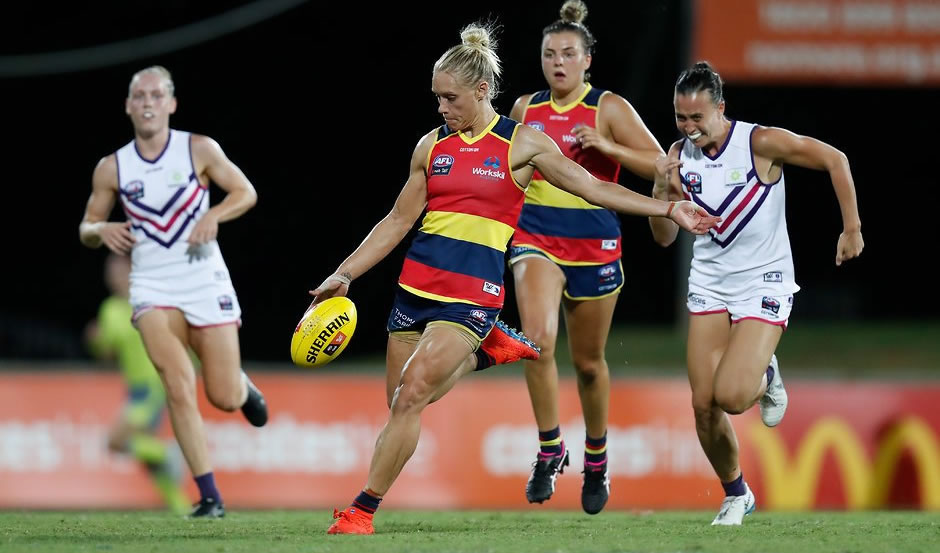 Round 5 of the 2019 AFLW Season this week and again the schedule will see the weekend stacked with games due to the JLT AFL series kicking off on Thursday and Friday nights. The AFLW will see two games on Saturday and three on Sunday, but unfortunately the guarantees for these contests on Draftstars have been slashed to $2,000 Guaranteed. For that reason, we won’t be providing articles for each day, and instead take a look at some players to watch from both slates to help you with your fantasy AFLW lineups this weekend.

For more in depth analysis for each slate, including historical stats, projections and AFLW cheat sheets, head to our AFLW Resources section.

The Saturday slate features Brisbane hosting Geelong, before Carlton take on traditional rivals Collingwood from Ikon Park. Lock out for your team lineups will be 4:45pm AEDT.

Magpie Jaimee Lambert ($14,860) offers good value this week as an elite midfield selection. After a couple of slow games, she bounced back with 99 fantasy points last week and we’ll be looking for a repeat of that form against the struggling Blues. Teammate Sarah Dargan ($9,220) has been a great fantasy choice and she continues to avoid the salary handicappers. Dargan picked up 79 fantasy points and a NAB AFLW Rising Star nomination last week, and her season average of 55 points makes her a great cheap pick.

Well done if you found debutant Jacqui Yorston ($10,950) last week. The number 71 draft pick had a cracking debut, racking up 67 fantasy points for the Lions. If she can match that again, she’s well worth the investment. Her teammate Lauren Arnell ($10,900) remains a solid fantasy choice as well. She’s averaging 53.8 fantasy points this season and offers flexibility as both a midfielder or a forward in your lineups.

If you’re looking for consistency in the midfield, then Madeline Keryk ($13,850) is worth consideration. Her four matches have all been in the 60-75 point range so far and she seems to be flying under the radar a little.

For a cheap defender, you might like to take a chance on Collingwood’s Darcy Guttridge ($5,000) who has been named for her debut. Guttridge comes with a fine resume as the number nine draft pick and former under-18 All Australian captain. She’s been out of action due to injuries, so hopefully she’ll hit the ground running for the Pies.

The Sunday slate starts with the GWS Giants hosting Melbourne at 2:05pm AEDT, followed by the Kangaroos taking on Adelaide in what should be a brilliant top-of-the-table clash. The final game of the slate sees Fremantle hosting the Western Bulldogs.

Another with a price rise has been Adelaide’s Erin Phillips ($16,800) after another dominant game last week. Back-to-back ton-plus fantasy scores for Phillips and she’s the one the Kangaroos will have to stop this Sunday. Phillips won’t get it as easy this week against the strong Kangaroos backline, but even with a price rise, she is a tempting option.

Monique Conti ($12,610) was huge for the Bulldogs last week and she’s been solid for three weeks in a row after a slow start. Her price is still offering some value if she can continue her form. With Ellie Blackburn ($15,100) copping some big hits in the midfield, Conti is getting some extra time up the ground which is transitioning to some useful scoring.

Emma King ($11,600) is well-priced in the ruck division. She is coming up against the talented Jessica Foley ($16,670), but King has been getting forward and hitting the scoreboard which is a nice boost to fantasy scores. I also like Gemma Houghton ($10,900) who remains well-priced. She’s been super-consistent this season and I really like her athleticism to get up the ground, contribute in the ruck or push forward, especially in a match-up against the Bulldogs.