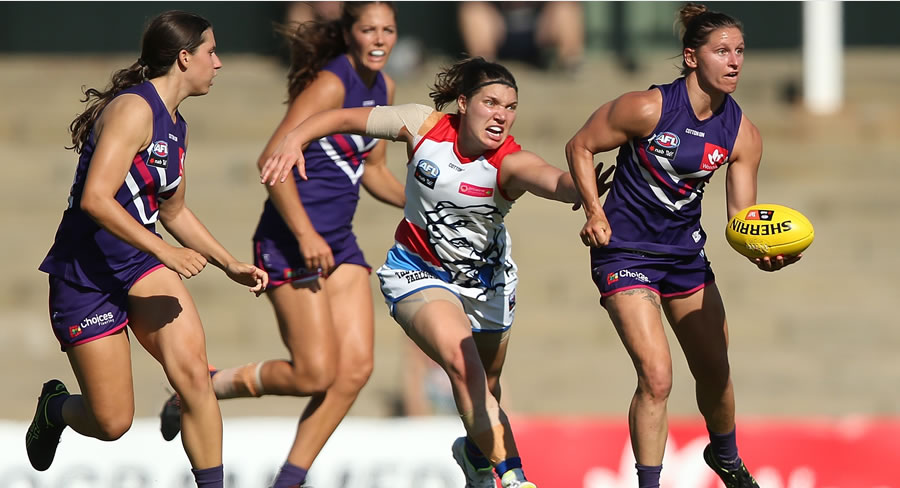 An interesting round of results last week with the previously undefeated Kangaroos going down to the Crows to open up Conference A, while the Cats are purring as they belted the Lions to hit the top in Conference B. With just two weeks left in the regular season, teams will need to make sure they take every chance they can as percentage is likely to play a bit part in determining who will make the finals in each Conference.

Unfortunately the AFLW guarantees at Draftstars have been cut once again which is disappointing to see. There’s a $1,500 Guaranteed for both the Saturday and Sunday slates, while individual games are offering $750 Guaranteed. Let’s hope for a good turnout for these contests to push past the guarantees so we can see some strong prize pools for the AFLW Finals.

Let’s take a look at the key players to watch this weekend for Round 6 of the AFLW season. Of course, for more detailed analysis, historical data and statistics, we have a dedicated AFLW Resources section which has all the juicy info that you’ll need to help you build your AFLW fantasy lineups.

Three games are on the way on Saturday with Geelong hosting Fremantle, before a big double-header at Marvel Stadium. Collingwood will tackle the Kangaroos before the Bulldogs and Melbourne take to the field. Hopefully there’s a big crowd in attendance under the roof to enjoy these two games at one of the AFL’s premier venues. Lockout for the Saturday slate is 2:35pm AEDT.

Kiara Bowers ($22,430) was enormous last week when the Dockers defeated the Bulldogs with the young star amassing 23 disposals and 16 tackles for a staggering 157 fantasy points! Her price has gone up even further which makes her hard to fit into your fantasy lineups, but boy, her ceiling is through the roof!

Another who had a massive game is North Melbourne’s superstar Emma Kearney ($16,430). Going head-to-head with Erin Phillips, Kearney was back to some of her best footy as she collected a season-high 31 disposals for 129 fantasy points. The Roos have a soft match against the winless Magpies this week, so Kearney could run rampant once again at a great price.

Another to crack the ton last week was Geelong’s Olivia Purcell ($13,840) in their big upset win against the Lions. Purcell picked up 20 disposals and a goal to pick up 102 fantasy points and a NAB AFLW Rising Star nomination. Her price is still attractive if she can maintain that sort of form.

Ash Brazil ($12,730) is going to be kept pretty busy against the Kangaroos and she offers a great price. She is capable of some big numbers and will roam all over the ground. A couple of quieter weeks following a concussion have seen Brazil’s salary tumble, but she’s a great option in the tricky Defender position.

For the ruck, I’m again leaning towards the consistent Gemma Houghton ($11,640). Her five games this season have all been within the range of 58-67 fantasy points which is pretty solid for her price. We’re yet to see her have a huge game, but maybe she can go well against the Cats this week.

For a budget option, North Melbourne will debut youngster Daria Bannister ($5,000) this week. The former Bulldog ruptured her ACL in the first round last season and she finally makes her return to AFLW level. Listed as a forward, she might be a useful pick.

The Sunday slate will see Adelaide welcome the GWS Giants before Carlton and Brisbane round out the weekend’s action. Locked out will be 2:05pm AEDT on Sunday.

Carlton skipper Brianna Davey ($13,360) is getting back to some of her best form. She was instrumental in their win last week and with two scores over 70 in the past three weeks, Davey is starting to find the output required for that price tag.

Cora Staunton ($11,520) has also been in very good form with scores of 60 and 72 over the last two matches. Staunton gets a tougher matchup against the ladder-leading Crows this week, but her price is still very affordable.

A midfielder flying under the radar is Brisbane’s Nat Exon ($17,130). Her price has been bumped up this week but she’s had three scores above 80 fantasy points this season, and she might be a good point of difference coming up against the Blues this weekend.

One who has gone down a little in price is Carlton’s Madison Prespakis ($15,760). She’s already shown that her best is very good, and a favourable match up here with the Lions makes her an attractive option for a top-tier midfielder without the hefty price tag.

For a cheaper option, Deni Varnhagen ($9,500) is at a great price after a poor game last week. She’s typically quite consistent, with an average of around 50 fantasy points, and with a soft game against the Giants, expect Varnhagen to bounce back.

In the ruck Ingrid Nielsen ($9,550) has been terrific for the Giants after coming into the side when first choice ruck Erin McKinnon ($9,880) was a late withdrawal. She’s averaged 58 points in her two AFLW games this season. McKinnon has been named on the bench so that may limit the output of Nielsen a little, but she offers a cheap option for your fantasy team in the ruck position.