A slightly different configuration for AFLW Round 4 this week, with the launch of AFLX resulting in no AFLW game on Friday night. Instead we have three games on the Saturday slate for the first time this season. Carlton will head down the highway to take on Geelong, the Western Bulldogs will welcome Brisbane, while the late game is a mouth-watering one with Adelaide to tackle the undefeated Fremantle. The Saturday slate will kick off at 4:45pm AEDT.

Draftstars is the home of AFLW with some tremendous results already so far this season for our DFR followers. They have a juicy $5,000 Guaranteed contest on offer for a $15 entry, with a corresponding $500 Mini for just a $2 buy-in.

For something a little different this week, we’ll be constructing a sample Draftstars lineup that you are welcome to simply close your eyes and follow. For more in-depth analysis and help constructing your lineups, then head to the brand new AFLW Resources section for historical data, projections, cheat sheets and more!

We need to first pick two forwards and it’s hard to go past Crows skipper Erin Phillips ($13,010). She had a huge game last week scoring 105 fantasy points in a commanding performance, and yet somehow has avoided the wrath of the salary crunchers. She’s great value but sure to be heavily owned.

Georgia Gee ($9,300) had a solid game for the Blues last week, and she faces a favourable match up here against the struggling Cats. Gee is averaging 11 disposals in her two games this season, as well as a healthy average of 6 tackles which is great for fantasy scoring.

In the midfield, first picked is Adelaide jet Ebony Marinoff ($18,080) who somehow has dropped in price after a scintillating game last week where she broke the AFLW record for most disposals. Marinoff racked up 33 disposals at a rate that would’ve beaten Tom Mitchell’s AFL record of 54 disposals! The reason for the price drop is the match up against the undefeated Dockers who have a strong midfield. However with Hayley Miller suspended, the Dockers are a little weakened. Marinoff is such an in-and-under player that she will be hard to tag so I’m happy to play her in my lineup and hope for another 100+ score.

Another popular pick might be Carlton’s Madison Prespakis ($16,580). She was best on ground last week as she led the Blues to their first win of the season with 21 disposals and three goals for 92 fantasy points. While the goals obviously boosted her total, she has a favourable match up against the Cats and has proven to be a dominant player.

In terms of value, Anne Hatchard ($12,440) is about as good as it gets this week. She’s the equal second-highest disposal winner so far this season, averaging 23 disposals, and when combined with over five tackles a game, Hatchard is a premium midfielder at a discounted price.

The final member of our midfield is Fremantle’s Melissa Caulfield ($7,270). She hit 60 points in the opening game of the season which would be huge, but even her season average is good value at the price. She might get a few more minutes in the middle of the ground with the suspension of Hayley Miller.

We’re paying down in defence and hoping to get a bounce back from two players who let us down last week. Hannah Martin ($5,690) was a late withdrawal through injury but she’s been named to face Fremantle. Her 58 fantasy points two weeks ago would be ideal, but she only needs a little over half that to hit the mark at her bargain price. Carlton’s Lauren Brazzale ($7,100) had a shocker last week which burnt many teams. She’s been named on the bench and a return to her form of the first two rounds would make this a great pick and perhaps a nice point of difference.

Finally in the ruck and we are going with Fremantle forward Gemma Houghton ($9,990). She’s super athletic, roaming up the ground and deep forward when she needs to, and also chips in with a few hitouts. She’s been super consistent around the 60-point mark which would be a solid return for her price. 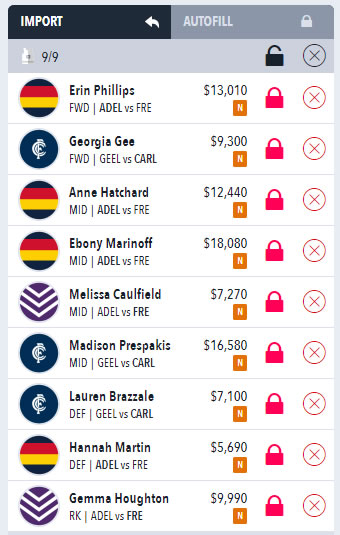