The 2019 AFL Women’s season kicks off this Saturday, February 2nd with a fair bit of excitement attached. There are two new AFLW teams, a new conference setup, a re-jigged finals format and a heap of new fantasy AFLW players for us to watch out for. Footy is finally back!

We’re also excited to see the Australian Daily Fantasy Sports sites get behind AFLW with some terrific contests on offer for the opening weekend of competition.

Draftstars are leading the way with a $10,000 Guaranteed contest for the Saturday slate, which is a very solid number and comparable to the current offerings for other popular mainstream sports as BBL or NBA.

Saturday’s fixture will see one of the new kids on the block in Geelong host Collingwood at “The Cattery” while AFLW heavyweights Adelaide and the Western Bulldogs will battle in the second game of the evening.

The slate locks out at 6:40pm on Saturday, and there should be some great value on offer for DFS players, with many of the AFLW players still relative unknowns. We’re here to provide you with a few insights into the key players, along with a Draftstars Cheat Sheet that will offer projections, value and important historical information that will be crucial for you in forming a winning lineup.

One of the differences that we’ve seen in AFLW compared to AFL is the dominance of the top tier players. Player depth is still an issue in AFLW, and even though there are more and more women jumping into the game every day, with two new teams competing at the elite level this season, the gap between the very best and the weakness is significant.

If you can spot a cheap player who is going to find the footy, then that’s great, but remember that some of the cheaper players are going to struggle to get too many points on the board. The floor for fantasy scoring in AFLW is a lot lower than for players in the AFL. For that reason, it’s really important that you pick some upper-tier players who can consistently find the ball, as their output is going to offer you the most value for their price.

A great example of that is Crows ball magnet Emily Marinoff ($20,200). She’s going to cost you over a one-fifth of your budget but her average of 94 fantasy points is far and away the largest on the slate, so even at that price, she offers solid value. Marinoff is also as consistent as they come. She just doesn’t have a bad game, so she’s going to get your team heading in the right direction.

With the move of 2018 competition best and fairest winner Emma Kearney across to the Kangaroos, Bulldogs star Ellie Blackburn ($14,320) may be an inspired choice for fantasy lineups. Blackburn picks up plenty of the ball in the midfield, but perhaps without Kearney there, she may get even more opportunity as the number one midfielder for the Dogs.

If Adelaide’s Erin Phillips ($11,800) can stay fit and firing then she’s one of the elite players of the AFLW competition. Phillips won the competition best and fairest award in 2017 and possesses strength and skill that few females can match on the footy field. Her price is perhaps reflective of the severe quad injury she suffered in the past, but she’s definitely worth a punt at that price.

In a similar mould to Phillips is Bulldogs marquee player Katie Brennan ($11,410). She’s also had a rough trot with injuries, and was unfortunate to miss out on the Bulldogs Grand Final win after a sling tackle saw her cop an unprecedented suspension, when the men’s equivalent would’ve only resulted in a fine. Brennan avoided missing suspension from the first game of the 2019 season, so she’ll be ready and raring to go this Saturday. She has missed a fair bit of football, but her best is elite, so her price is hard to ignore.

Justine Mules ($8,940) provides a cheaper option in the midfield and does provide a high value projection for your lineup. While Mules doesn’t get a heap of the ball (average of under 10 disposals per game last season), she is a ferocious tackler which is great for fantasy scoring. Last season she picked up 31 tackles in seven games, with a high of 9 tackles in the opening game against the Lions, and that’s all you’ll need from her to hit her value.

A bargain choice to balance out your Draftstars lineup could be Geelong youngster Nina Morrison ($5,000). Morrison was snapped up as the 2018 number one draft pick for a reason. She has a ferocious attack on the ball, some good skills and is likely to get a run in a forward-mid role for the Cats.

Another cheap option comes in the ruck position with basketball convert Jessica Foley ($5,000) named in the ruck for the Crows in the opening game of the season. She gets her opportunity with number one ruck Rhiannon Metcalfe out for the season, and Jasmyn Hewett ruled out with an ankle injury.

Check out our cheat sheet below, with averages and recent performances where available for all the players named for the Saturday slate! 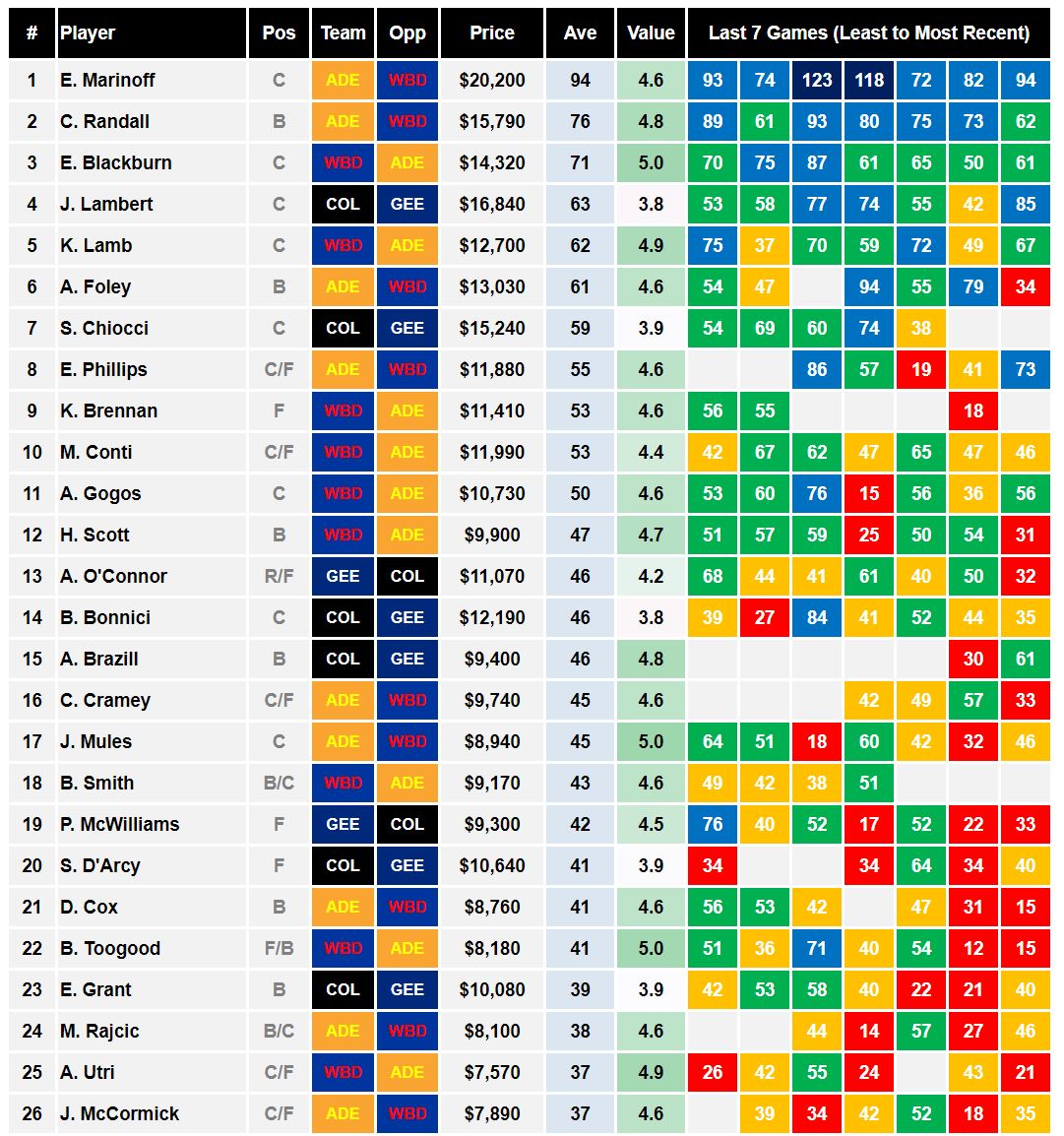 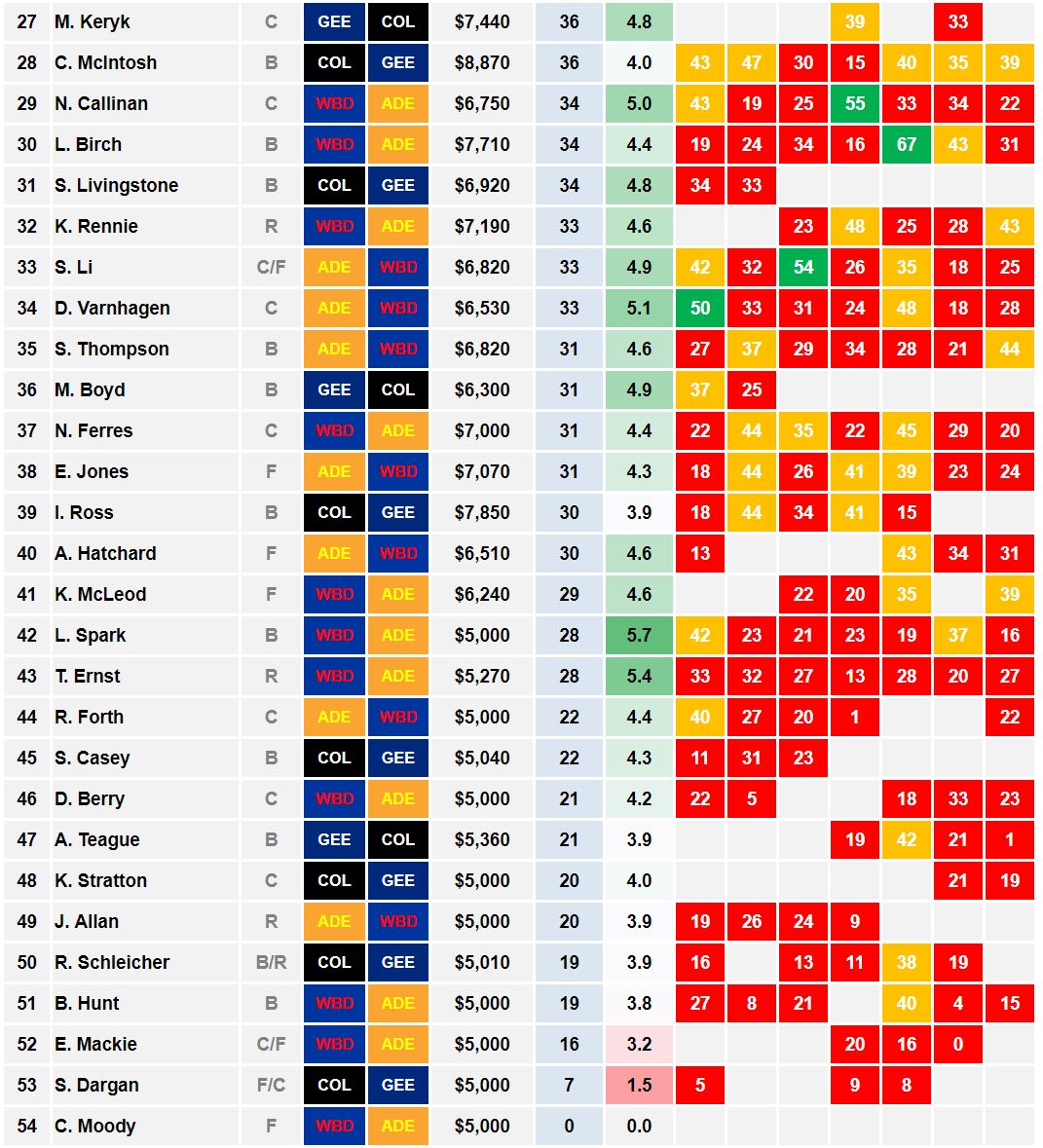 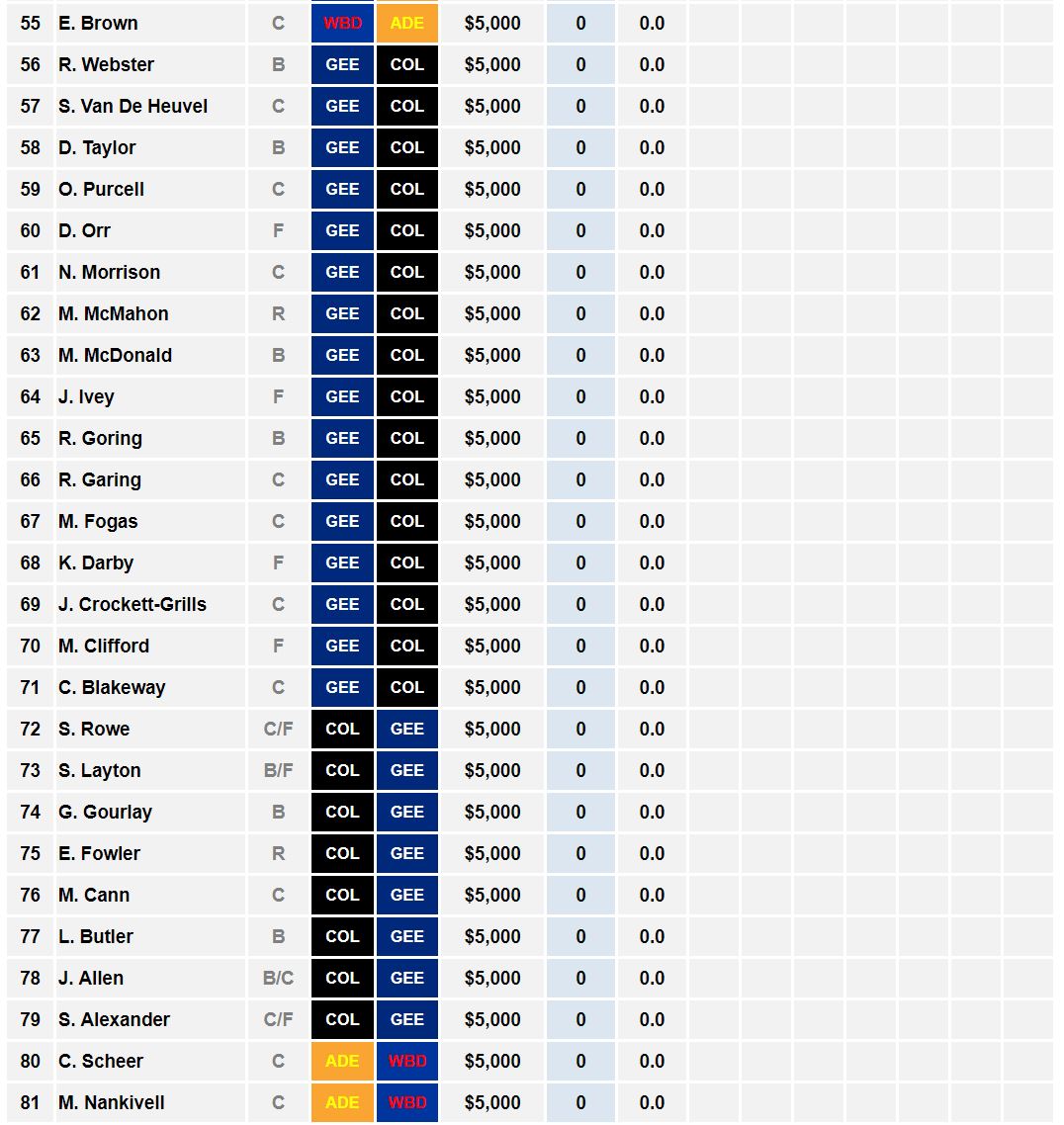