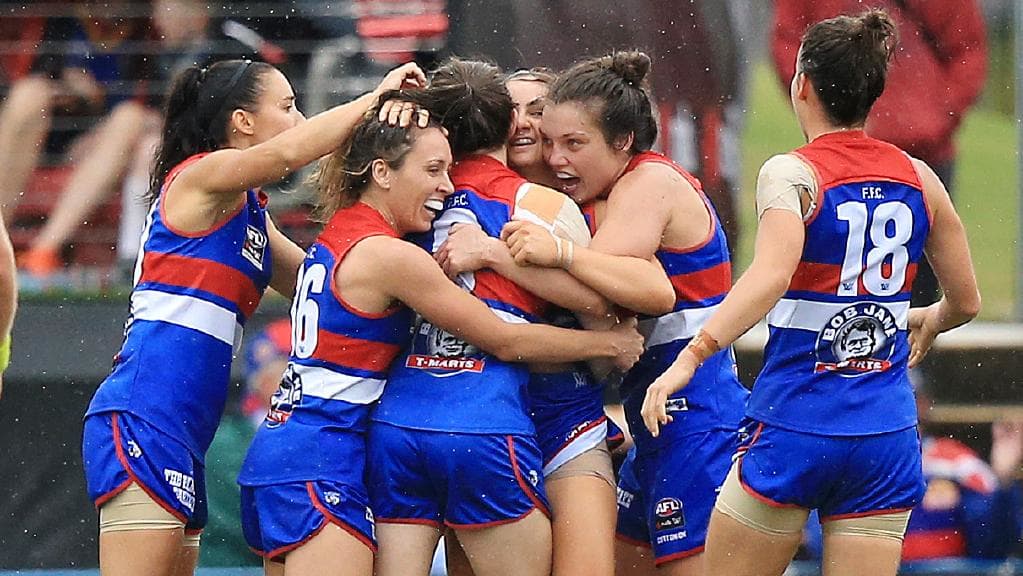 It was a great start to the 2019 AFLW season last weekend with several really close games, wins to the two new teams of the competition and some rising stars emerging onto the AFLW scene.

It was also a good weekend for those who followed our AFLW tips, with several Twitter followers sharing their successes in the major contests over at Draftstars. We were able to pluck a couple of really strong value picks with Geelong’s Nina Morrison having a fantastic debut as the number one draft pick, while Alyce Parker looked sensational for the Giants, with both players collecting a NAB AFLW Rising Star nomination for Round 1.

We’re probably not going to see the same sort of value on those players this weekend, but let’s see if we can uncover a few more fantasy gems for AFLW Round 2.

Once again Draftstars are running the major AFLW fantasy contests in the country with a $5,000 guaranteed prize pool for the Saturday slate which sees Collingwood host Melbourne at the Magpies traditional home of Victoria Park, while the Western Bulldogs also head home to Whitten Oval to host Geelong. Both matches should be pretty tight so it gives players from all teams a chance to score well.

One of the great ways to score points in fantasy AFL is through tackles. In general, the women’s game is a lot tighter with less free-flowing play than the men’s, which means that there’s a great opportunity for tackle points for in-and-under type players. We saw that last weekend and it’s a great strategy to put in place when selecting your fantasy team.

Melbourne’s Elise O’Dea ($18,210) is a good example of that as she picked up 88 fantasy points last weekend, with a strong total of 9 tackles. She led the way for the Demons who will be looking to bounce back from a disappointing loss. She’s the most expensive player on the slate, but well worth the investment.

Ellie Blackburn ($16,130) is now leading the Bulldogs midfield and she stood tall last week, with 17 disposals, 6 tackles and 6 marks for 90 fantasy points to get the Dogs home in a thriller. She’s very consistent and a great base to build your team around.

Be aware that no. 1 draft pick Nina Morrison ($15,060) unfortunately ruptured her ACL at training on Thursday night so will be missing here. A couple of cheaper options from the Cats might be Renee Garing ($11,950) and Madeline Keryk ($10,810). Garing was very good with 17 disposals and 7 tackles, while Keryk came across to Geelong after being highly-rated at Carlton. She picked up 16 disposals and 6 tackles in her first game in the hoops and her price is much more appealing.

The ruck position offers a couple of interesting options for this slate. Lauren Pearce ($13,230) was the most effective ruck of Round 1 with 32 hitouts, but she’s also the most expensive. Her teammate Eden Zanker ($7,140) was also useful as a ruck-forward and her price is cheap, but her 66 fantasy points were inflated by two goals.

A third option as a ruck, or potentially a forward, is Geelong’s Aasta O’Connor ($10,950). She picked up 65 fantasy points, including 18 hitouts, 10 disposals and 4 tackles which is a nice spread of stats. I was very keen on O’Connor until the teams were named and number one ruck Erin Hoare ($9,290) was named to play for the first time in 2019. This week, the Cats come up against the Bulldogs who struggled in the ruck with Celine Moody and Kimberley Rennie largely ineffective. I think O’Connor and Hoare can dominate in the air, but the question is, who will get the most time on the ball.

If you’re looking for a cheap pick, then perhaps Eliza Hynes ($5,000) is worth a shot. The former national volleyball star has been named for the Pies for her first game in the centre of the ground. It’s likely she’ll run around a second ruck option, but at a bargain price, she’s an athletic player who might be worth a gamble. 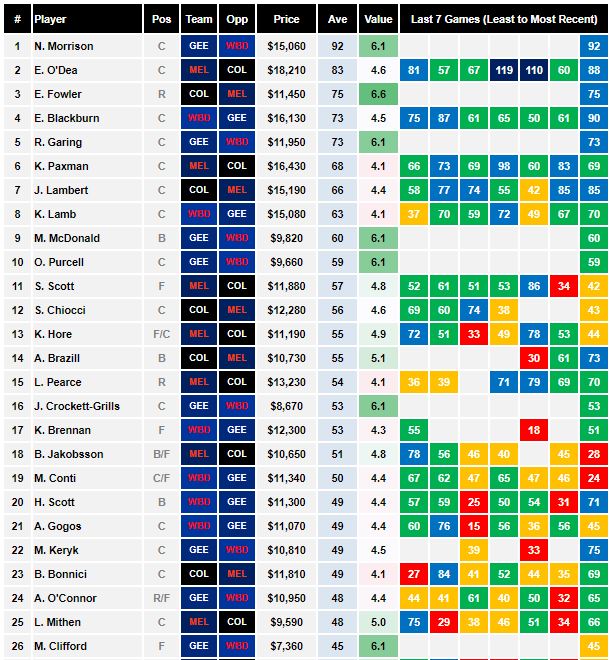 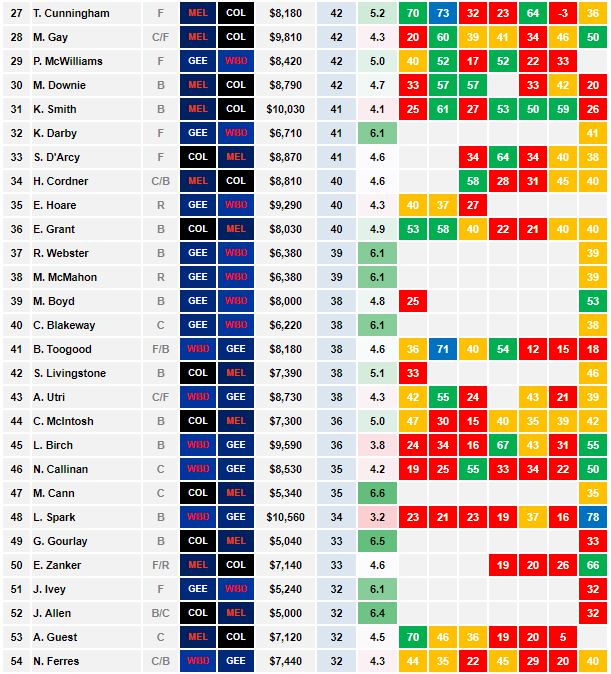 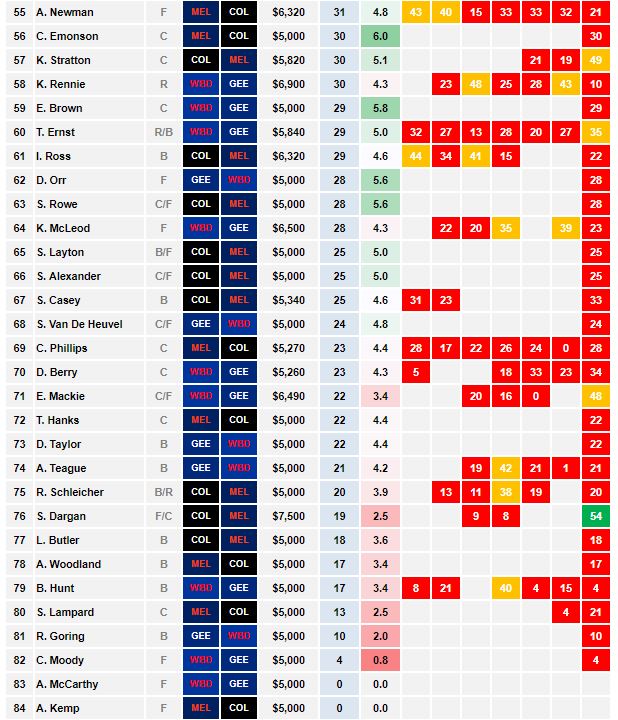