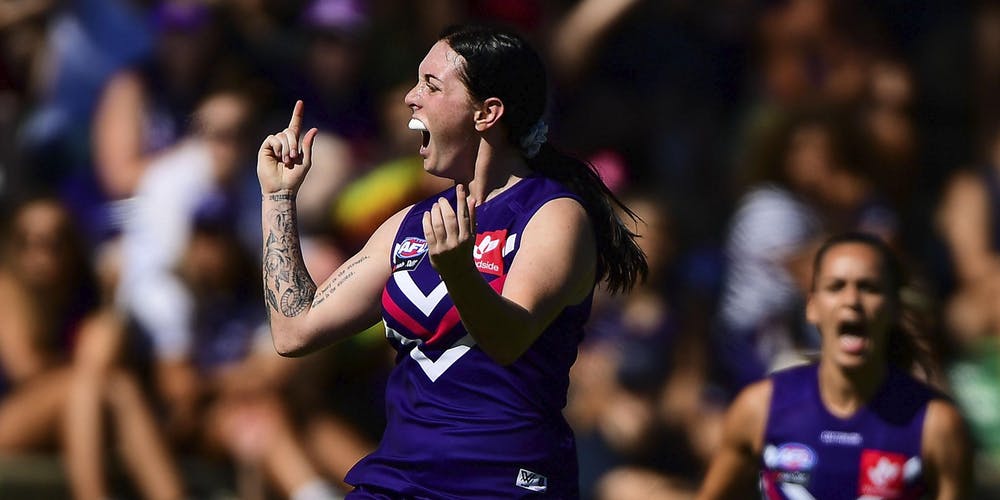 While the AFL season is now in full swing, the AFLW has reached the finals stage of the season. We have two semi-finals this weekend to get our teeth stuck into, with the two winners to progress to the Grand Final next Sunday.

It would be nice to say that the four best teams have made it through to the finals, but that’s simply not the case. The convoluted conference system gave us a grossly uneven playing field and a disappointing lineup for the semis.

The first match on Saturday will see Carlton host Fremantle with Draftstars putting up a $500 Guaranteed contest with lockout at 2:45pm AEDT. The Blues get the rights to host the semi after finishing on top of Conference B , despite only winning four games in the regular season. On the other hand, Fremantle only dropped one game, against premiership favourites Adelaide, and now have to travel all the way across the country to try and win a spot in the Grand Final.

Fremantle will start favourites and their players are also the most expensive for your fantasy teams on Draftstars. It’s hard to go past Kiara Bowers ($20,350) who has dominated this season with plenty of disposals and relentless tackling which is awesome for fantasy scoring.  Stephanie Cain ($10,720) is an important cog in the Freo midfield and is well priced, while I love the consistency of Gemma Houghton ($10,040) who is hitting 60-70 points every week. For the Blues, skipper Brianna Davies ($12,140) led from the front last week with a score of 103, and she’ll need another big game if they are to challenge this weekend. Tayla Harris ($10,340) was in the media for unique reasons this week, with the incredible photo of her majestic kick going viral on social media. Her best has been pretty good this season, but she’ll need to do it for four quarters on Saturday. The best value for Carlton fantasy players this season has come in defence with Kerryn Harrington ($9,800), Gabriella Pound ($9,080) and Jayde Van Dyk ($8,390) all viable choices.

The second semi-final sees Adelaide take on Geelong with the match getting underway at 1:10pm on Sunday. Once again, Draftstars will be offering a $500 Guaranteed contest for this match. Adelaide had an incredible season, losing just one match and dominating all other threats in their conference. They are the flag favourites and deservedly so as they should get the win here which will mean they will also host the Grand Final next week. First, they need to get past the Cats who have limped into the finals in their inaugural season. While it’s a great achievement, the reality is that they only won three games, their percentage is the worst of the entire league and it took the winless Magpies to cause a big upset in the last round for Geelong to hold onto their position.

It’s hard to see how the Cats can get close here, so Adelaide stacks seem to be the way to go. The Crows have been led by Erin Phillips ($14,970) all season, and there’s no reason to think she won’t have her way again. Her season average of 87.7 is huge for her price. Anne Hatchard ($11,290) has provided tremendous value all season, and her price has been slashed after she copped a head knock in the second half last week. If she plays then she could be great value, but teams are very wary of concussions nowadays.  Courtney Cramey ($9,470) returned last week with a solid 63 score, while Justine Mules ($9,290) is a tackling machine and Deni Varnhagen ($8,980) is still under-priced. For the Cats, the ball is going to be in their defensive half a lot in this game, so Meghan McDonald ($10,030), Madaleine McMahon ($9,510) and Melissa Hickey ($8,960) are all solid choices in the Defender position. You may also find room for Richelle Cranston ($12,150) as she is going to earn a lot of tackles in this one!