The Sunday slate of Round 3 of the 2019 AFLW Season brings us two games with Adelaide taking on Geelong and Brisbane hosting Melbourne. It’s already an important time for some of these teams, especially those in the competitive Conference A if they are hoping to reach the finals this season, so hopefully we see two close matches.

If you’re looking for some fantasy AFLW contests on Sunday then Draftstars are again leading the way with a range of contests for the slate, highlighted by a $4,000 Guaranteed. If you’re competing for a share of the prize pool, then Daily Fantasy Rankings are here to help with our key players to watch and all the historical data you need with our AFLW cheat sheets.

Brisbane’s Alexandra Anderson ($16,430) is the highest scoring fantasy player over the first two rounds with an average of 99.5 points. Her average of 24 disposals a game is on par with the men’s version which is a fair effort considering the length of the women’s game is much shorter. She also averages six tackles a game this season which is great for fantasy scoring. It’s hard to look past Anderson for your team as she’s not even the most expensive player on the slate, but you’d have to expect she’ll be very highly owned.

Adelaide’s Ann Hatchard ($13,490) was a great pickup for those who grabbed her for cheap last week. She’s averaging 84 fantasy points and 21 disposals this season, which is a big improvement on last year. Can she continue that form? If so, she looks a good value pick in the midfield.

Another well-priced midfielder is Melbourne’s Lily Mithen ($9,690). She’s produced two consistent scores so far this season, averaging a solid 17 disposals and a couple of tackles per game. Without Daisy Pearce in the midfield, she’s getting more time on the ball and at her cheap price, that’s enough to ensure a good return on your dollar.

The ruck division has a few interesting prospects for this slate. Adelaide’s Jessica Foley ($14,600) and Melbourne’s Lauren Pearce ($13,350) have arguably been the best two rucks in the competition so far this season. However you’re now going to have to pay a premium price for them in your lineups, and generally I’m reluctant to spend up for rucks in the women’s game.

Consider the cheaper-priced option of Brisbane’s Lauren Bella ($5,730).  The teenager has been dominant at Under 18 level, with her size and athleticism proving difficult to combat in the air. It seemed that Brisbane were unsure on their number one ruck at the start of the season, but Bella had a strong game last week with 23 hitouts and 11 disposals, and has now been named to start on the ball. If she can continue to improve and get more exposure in the ruck, then she’s a player to watch in future. It will no doubt be tough against Melbourne’s Lauren Pearce, but at a bargain price, Bella is worth the risk.

A couple of Cats are set to make their debut in the hoops this week which will give them a much-needed boost. Captain Melissa Hickey ($10,580) returns from injury while Richelle Cranston ($12,960) has been named in the midfield after serving her suspension from a pre-season practice match. Tread carefully with both players as historically, they aren’t big accumulators of the ball. Hickey does give you an option in the Defender position but coming back from a major injury is always a risk. Cranston is a higher price for someone who played pre-dominantly forward for Melbourne, but if she can spend more time in the midfield with the Cats then perhaps she can increase her output. I think both might be over-owned on this slate and might be a good fade spot. 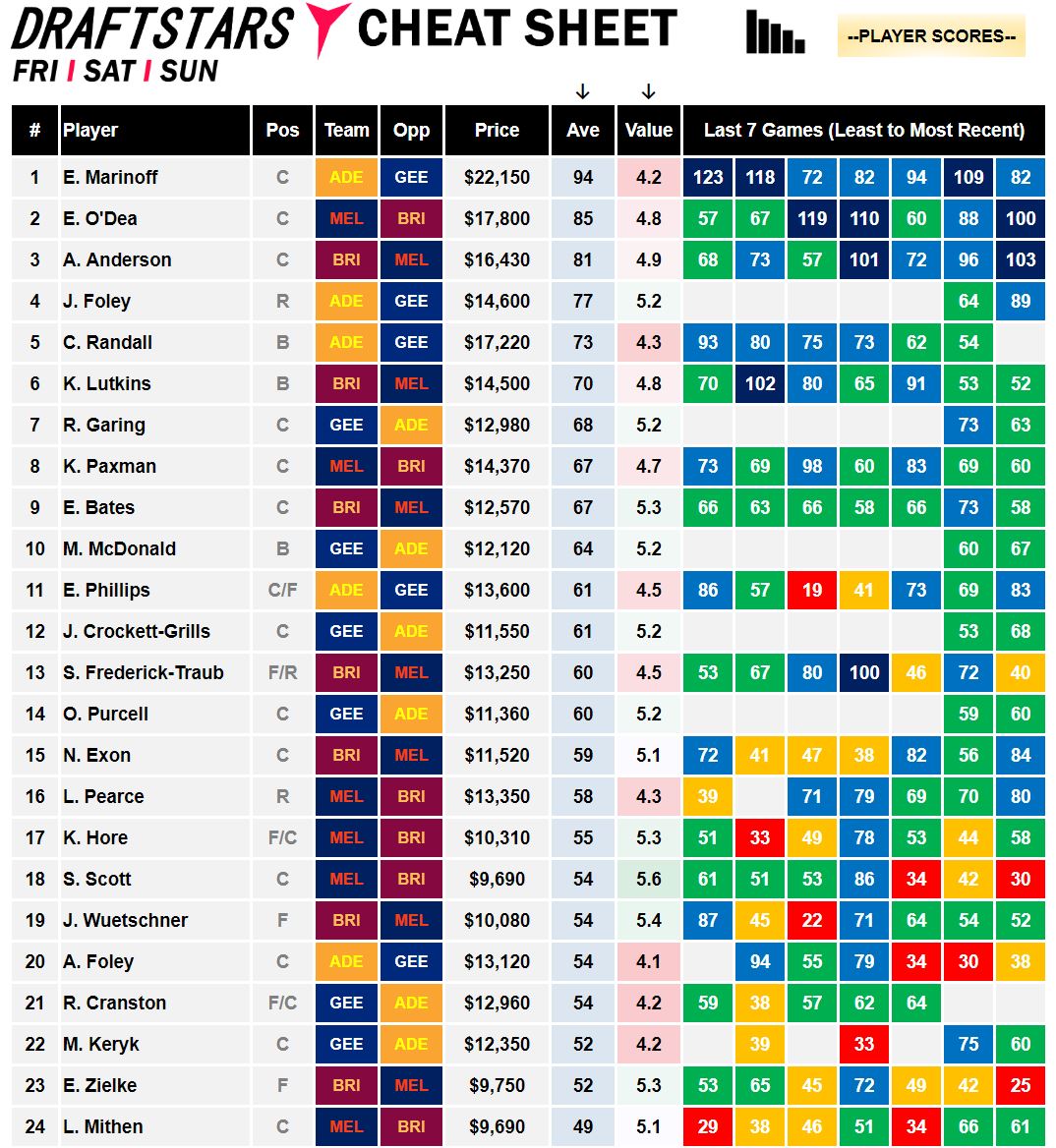 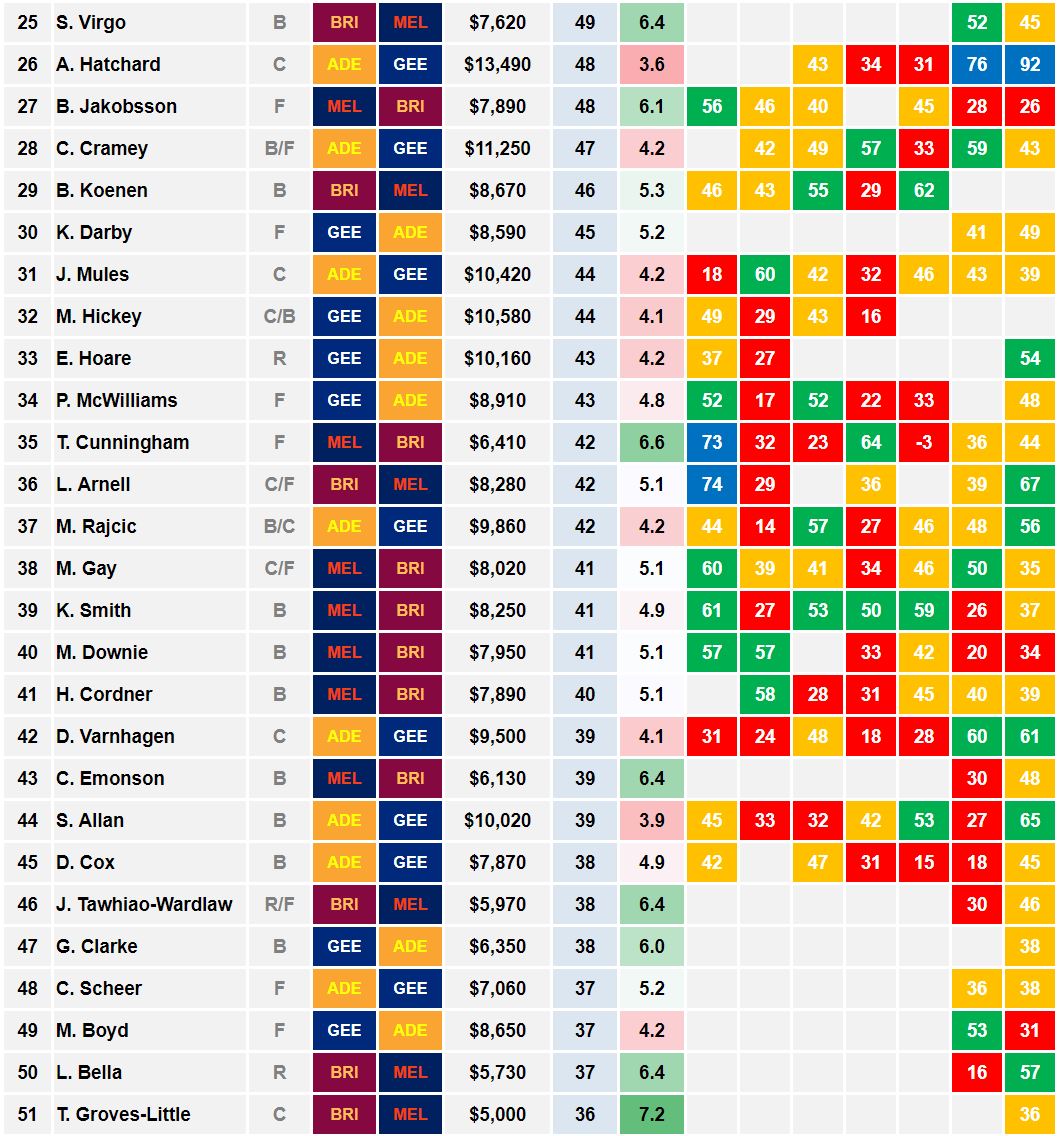 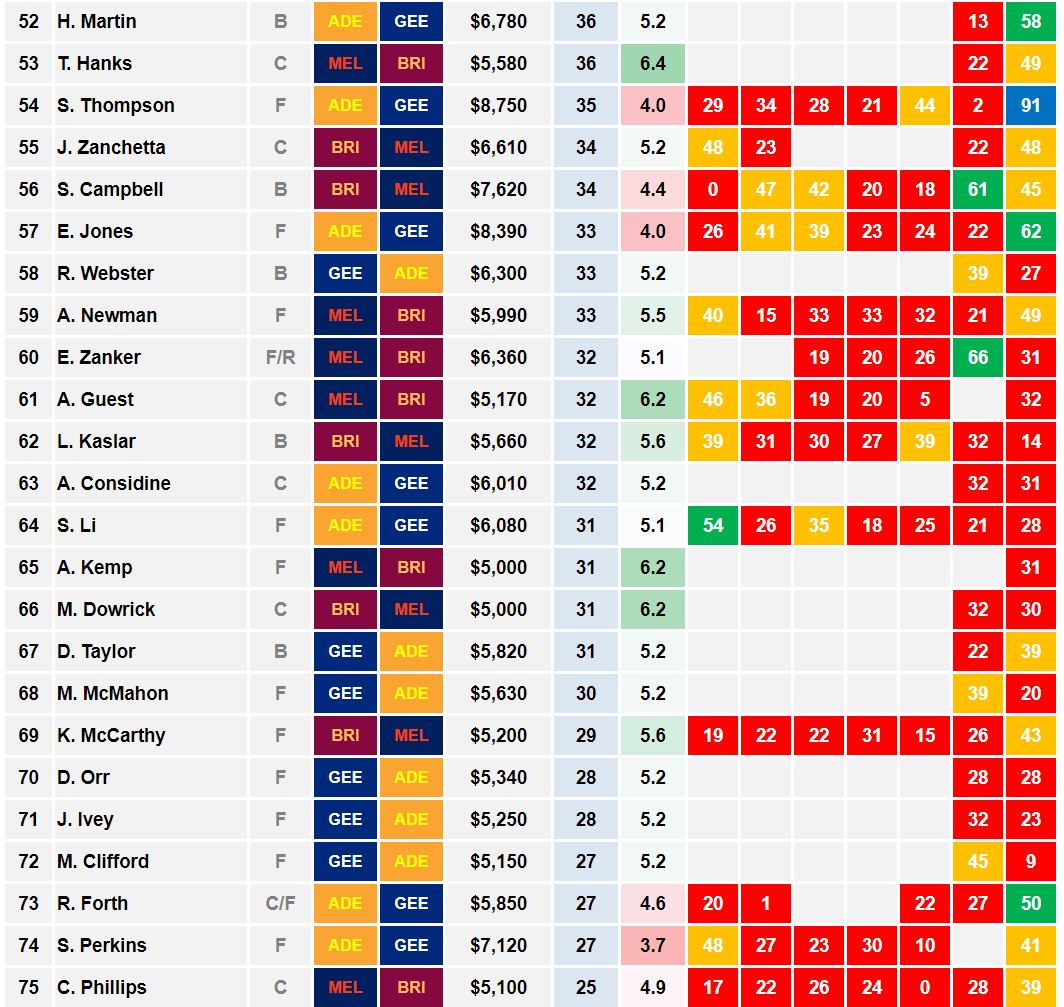