The Opening Round of the 2019 AFLW season continues on Sunday with three games on offer. North Melbourne will make their debut in the competition as they take on Carlton in Hobart, Melbourne will host Fremantle at Casey Fields, while the final match of the round will see Brisbane and GWS battle at Moreton Bay.

Draftstars are running a $6,000 Guaranteed contest that incorporates all three games on the slate, while there are smaller contests for each of the individual matches.

With fantasy AFLW still in its infancy, there’s some great opportunity to get amongst the cash in these contests, and although there’s a lot of new players this season, we’re here to give you some insights, as well as data projections for each player, to help you build your fantasy AFLW lineups.

The big off-season news in the AFLW was the signing of superstar Emma Kearney ($18,370) to the Kangaroos. Kearney has gone from winning the league’s best and fairest award for the premiers, to a brand new club who are making their debut on Sunday. She will have all the attention from the opposition, but she is a superb player and a ball magnet. With the most disposals in the competition last year, it’s very hard to ignore her in your fantasy lineups.

The GWS Giants are expected to improve this season and thumped Brisbane in a practice match two weeks ago. Their star in the middle of the ground is Alicia Eva ($17,470) who was ranked in the top five for average disposals and tackles last season. With the Giants looking to score more this season, she’ll again be one of the competition’s leading fantasy points scorers.

The Fremantle midfield might surprise on Sunday against a Melbourne outfit missing superstar Daisy Pearce, and blooding a few inexperienced players. Kara Donnellan ($16,490) is a great fantasy choice as she knows how to find the ball and averaged almost 8 tackles per game last season. She’ll run on the ball alongside Dana Hooker ($16,630) who averaged almost 18 disposals. The Dockers haven’t won away from Perth, but if you think they can cause an upset, you could consider playing these two together in a Freo stack as a nice point of difference.

Another to come across to the Kangaroos this season is former Pie Jessica Duffin ($13,060). She is a solid mark and strong kick who averaged around 13 disposals per game last season. The interesting thing with Duffin is that she has had kick-in duties for Collingwood in the past as she does possess a strong boot. With the new kick-in rules this season, we should expect to see more players run straight from the square, since you no longer have to kick it to yourself first. If they leave the square, this will count as a stat for the player, so Duffin may be a sneaky chance to benefit from that and pick up some cheap points for your fantasy team.

One Giant who may be a future star is teenager Alyce Parker ($5,000). Named on the ball for her debut match, Parker was the Giants’ number one draft pick (#12 overall) and is reportedly very good around the contested ball. At a bargain price tag, she’s going to provide you with good value.

Check out our cheat sheet below, with averages and recent performances where available for all the players named for the Sunday slate! 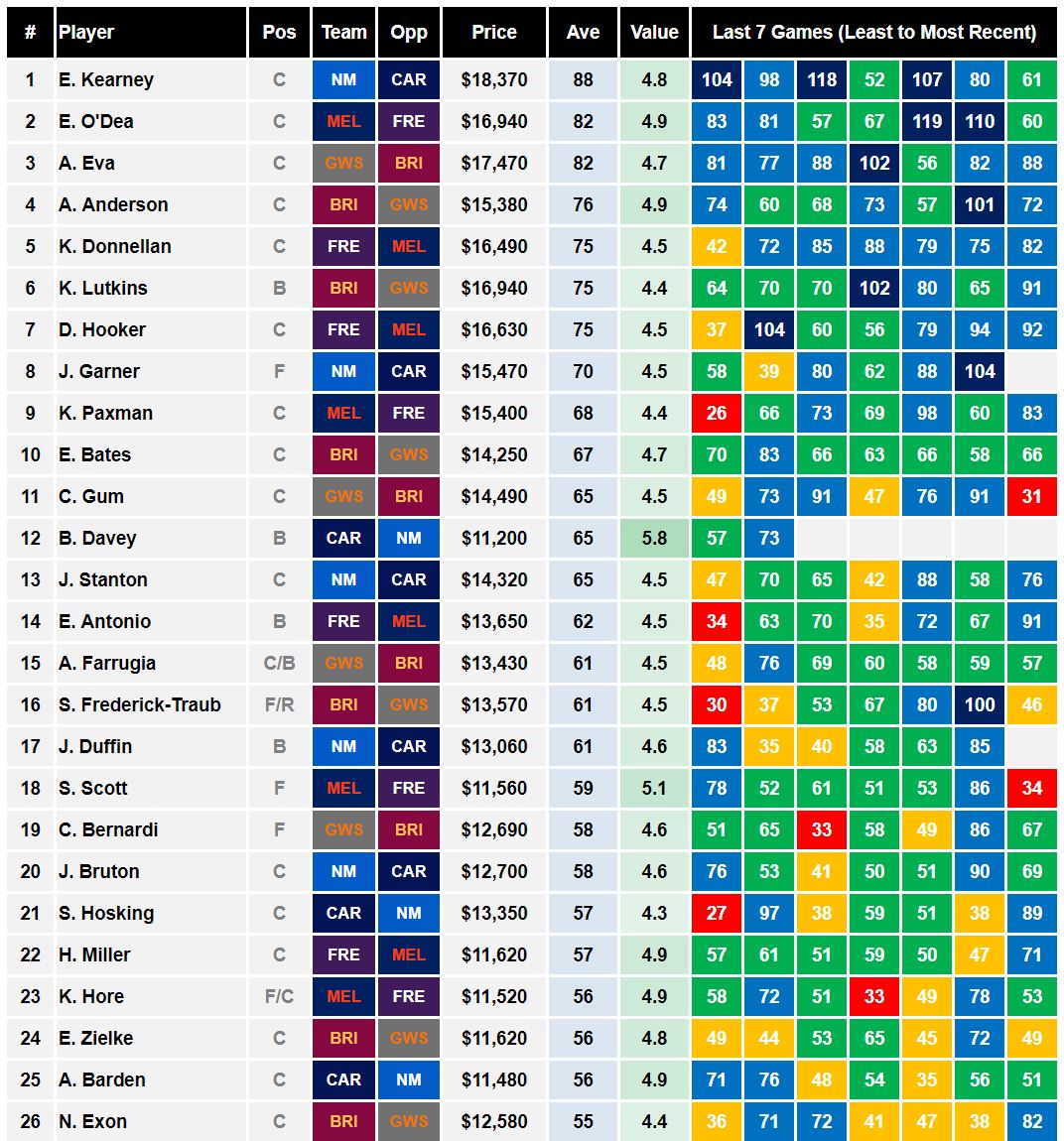 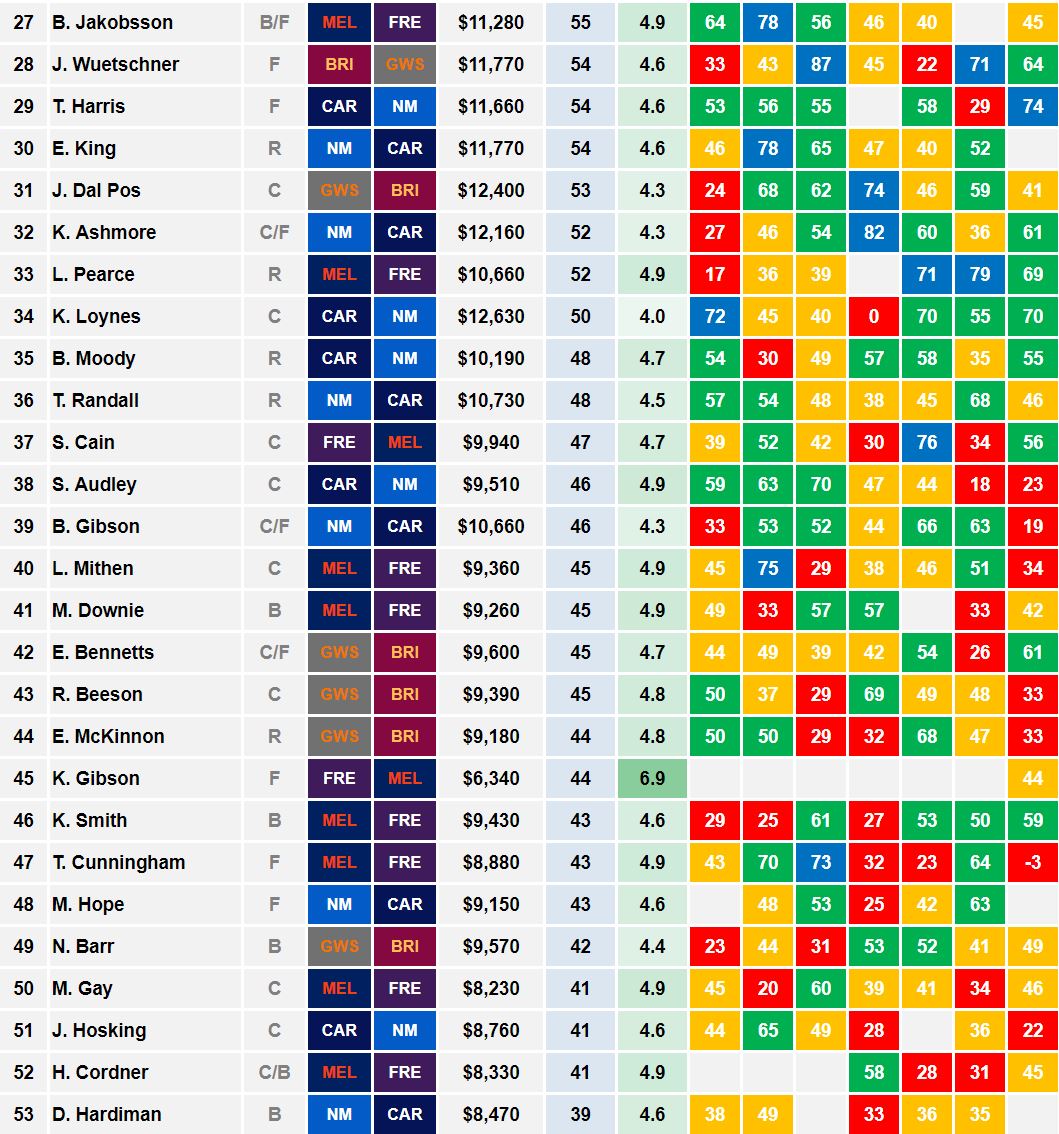 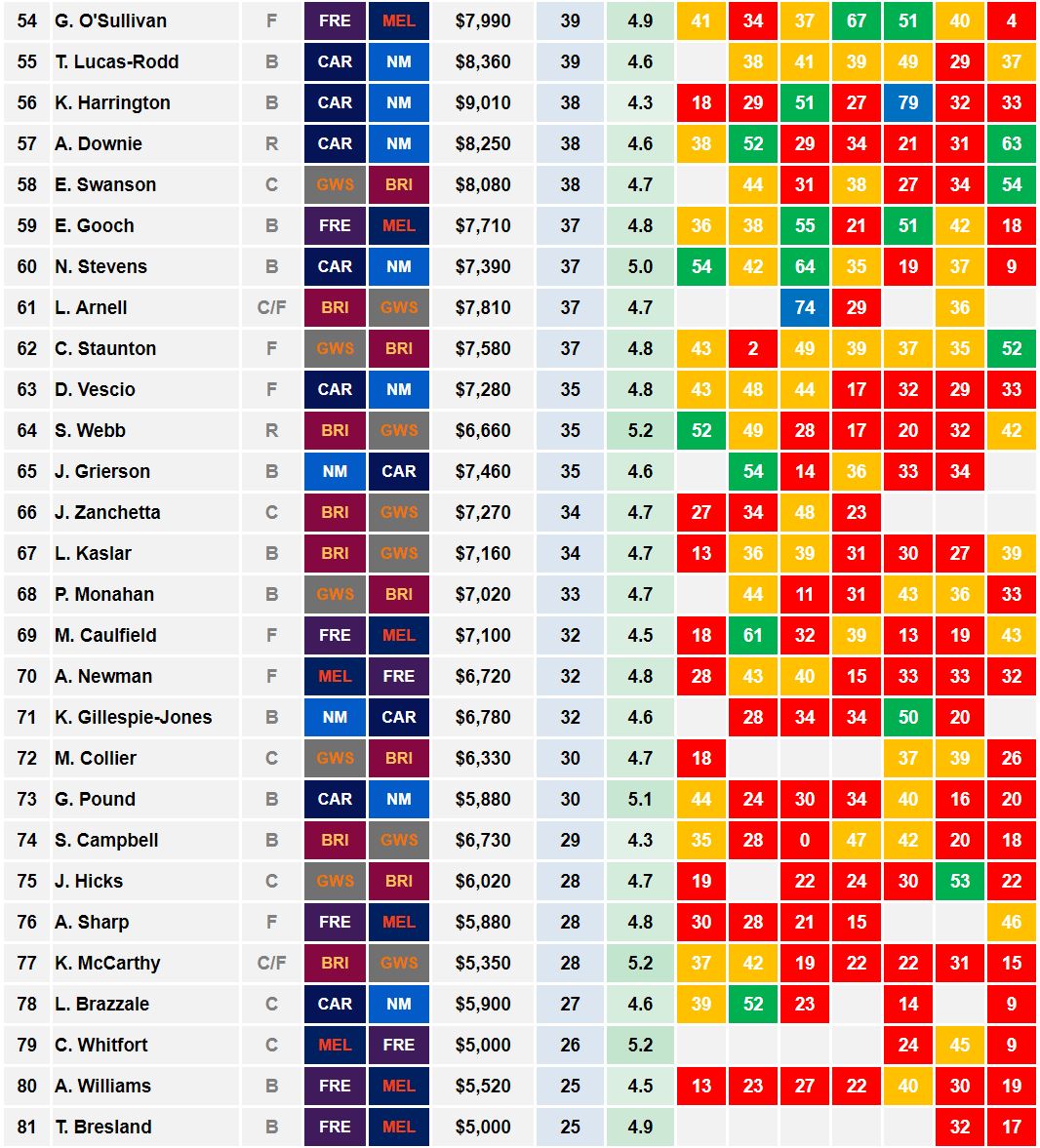 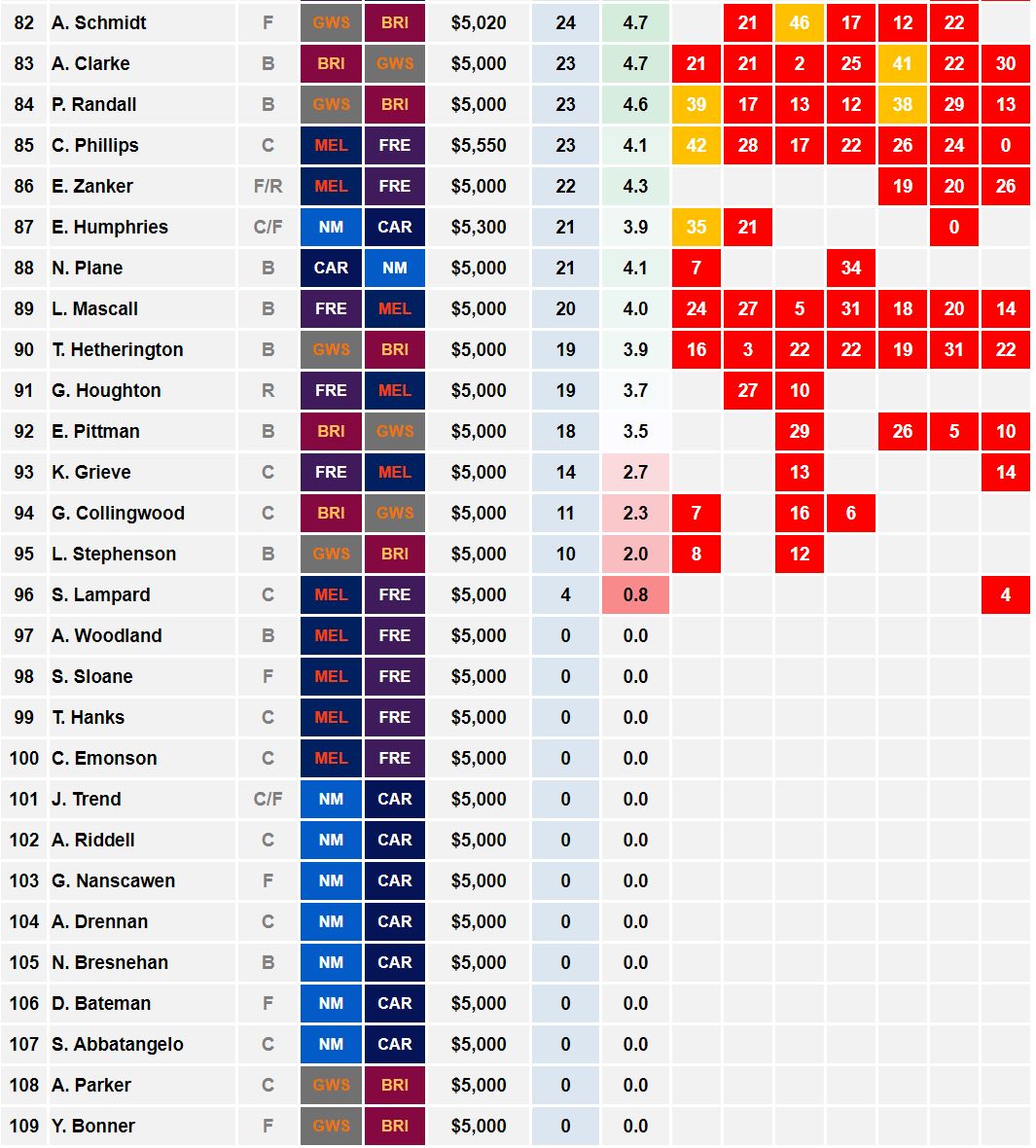 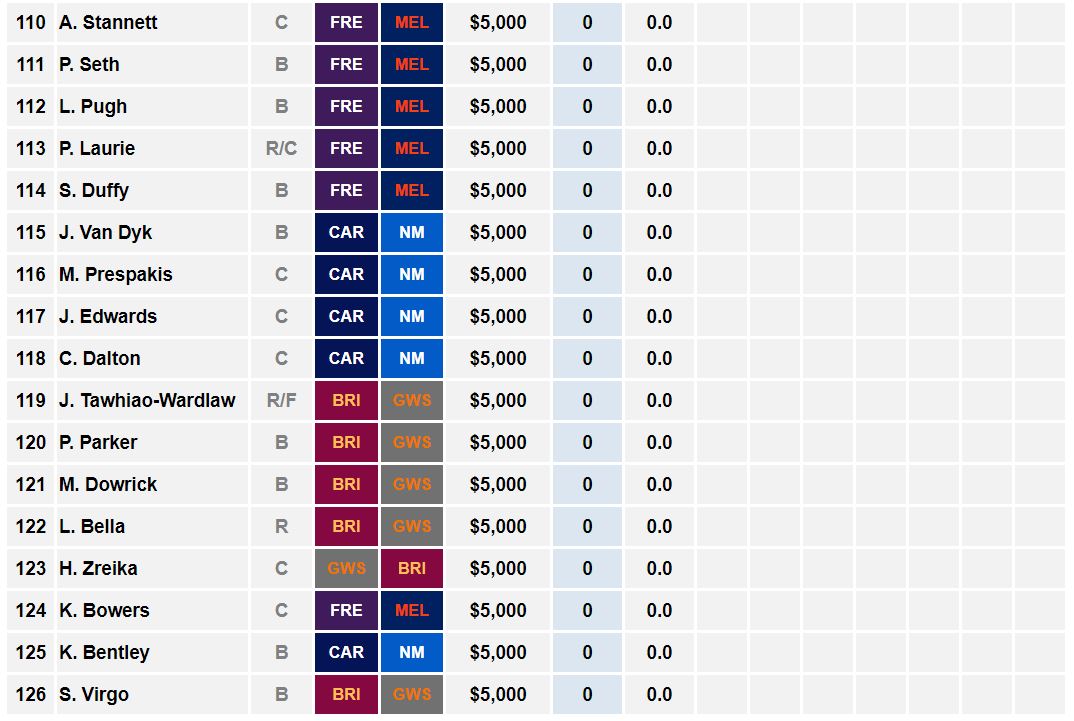