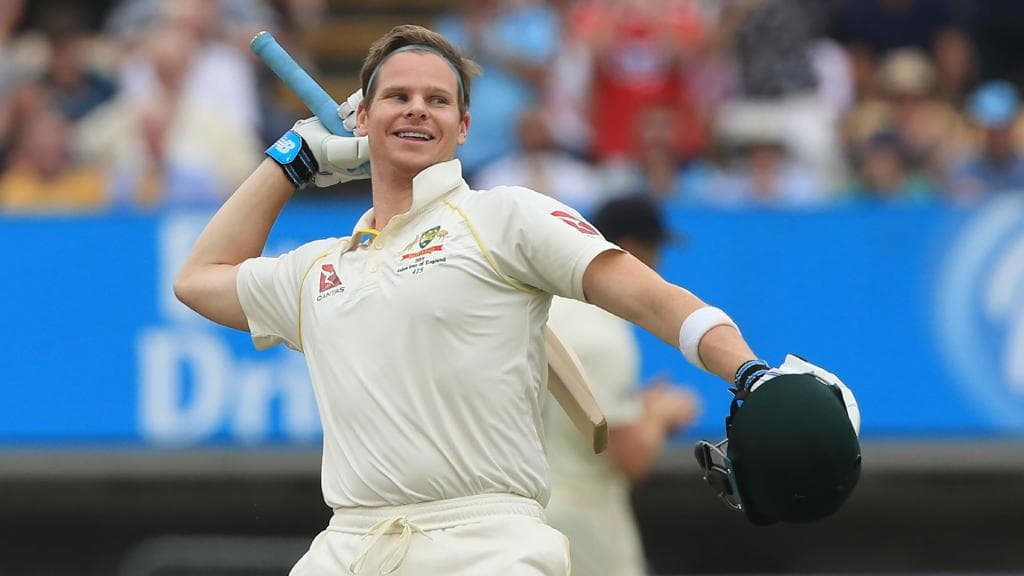 The Second Test of the five match Ashes Series between Australia and England will get underway on Wednesday, 14th of August at the Lord’s Cricket Ground in London. Australia take a 1-0 series lead after an extraordinary effort at Edgbaston where they grinded it out against an injury affected England side who were one bowler short.

Dubbed as Australia’s home away from home, Lord’s Cricket Ground is the home of English Cricket but Australia’s overall record is quite exemplary. Australia has only lost 7 Tests in the history of Ashes Tests with 15 wins and 14 draws. In 2015, Australia piled on 337 runs with the loss of only one wicket in the first day alone. Steve Smith smacked 215 and Australia rolled England in the 4th innings for not much and win by 400 odd runs. Last month, England defeated Ireland by 143 runs in their one off Test on a green wicket. In 2018, England smashed India by an innings and 159 runs, but did lose to Pakistan by nine wickets in the same year.

Early reports at the ground speculate that the wicket is going to be hard, dry and flat. This indicates that after the early swing of the new ball, the wicket should produce plenty of runs.

In team news, Australia officially have a bowling dilemma with Josh Hazelwood and Mitch Starc both looking to get back into the side after both were left out in Edgbaston. But the performances of Siddle, Pattinson and Cummins means that five does not go into three. Whilst Bancroft is on shaky ground after missing out in their recent tour match, the top seven should go in as unchanged. For England, Moeen Ali has been dropped with left arm tweaker Jack Leach coming into the squad. Leach did play the Ireland game and scored an amazing 92 runs after been sent in as a nightwatchman. With James Anderson injured in the 1st Test, a Test debut will go to Jofra Archer whose skill set and “swagger” will be tested at the home of cricket.

Unfamilar with the scoring differences between sites? Refer to our previous Ashes article here.

We might see a delay on the first day with the current forecast showing over 75% probability of heavy rain. Day 2, however, will be clear.

What can we say about Steve Smith?! Brutally brought England to their knees and they couldn’t get the bloke out in the 2nd innings. Set a lot of records in that 1st Test and single-handedly took many teams to cash. However, Draftstars have priced him to an extraordinary amount of salary at $26,500 this time around. On Moneyball, he's actually cheaper than England’s captain Joe Root. Root, like most of England’s batsmen, will be looking to spend much more time in the middle, and if the conditions and pitch suit, plenty of runs are there considering he wanted to bat at 3. Australia’s openers in David Warner and Cameron Bancroft both found themselves in the sheds early after the 1st Test and should expect lower ownership in tournaments. If conditions are dicey on the first day, then loading up on the openers of either teams (Rory Burns & Jason Roy) in the first innings could be a risky play. If you're looking to have Root or Smith in your teams, look to pair up with another batter to form a partnership. For Australia, Travis Head, Matthew Wade and even Tim Paine can bat for many hours, whilst you can make a case for Joe Denly, Jos Buttler and Jonny Bairstow to bat with Joe Root. I'll be wary of Ben Stokes, however. Called upon to take the share of Jimmy Anderson’s bowling workload, I can see Stokes only bowling smaller spells. We cannot discount his form with the bat however, after making good runs in the 1st Test.

Your guess is as good as mine for the makeup of the Australian team, but you can back on having Nathan Lyon being selected. Lord's hasn’t been a traditional turning deck and I don't see a repeat of the 4th innings at Edgbaston - he's an easy fade for me. Also a fade is the incoming spinner in Jack Leach. We saw he can bat against Ireland but we didn’t really get a go with the ball. As for the fast bowling, Chris Woakes is my pick this week. He's back at the ground where he actually scored 137 not out against India in 2018 and took 4 wickets for the match. There's a lot of attention and ownership with World Cup hero Jofra Archer likely to get a debut. If you're building a single side, he's pretty much a must have in your lineup. Whilst Stuart Broad headlines the attack, Archer is now the x-factor and will be looking to skittle the Australians.

As for the pace attack for the Aussies, we're not going to get the teams until the toss. If England are sent in first up then shares in the pace attack is a sound strategy and vice versa if Australia are sent in. Peter Siddle, if picked, provides good salary relief along with Josh Hazelwood. Mitch Starc is an interesting one - he's reasonably priced but we need him to actually play. If he's not picked, make sure you pivot to James Pattinson (UPDATE - not named in the final XII). Having Pat Cummins in your side is very safe play and a pivot from Chris Woakes. Very tough to figure out!

Well, that was an impressive win from Australia after being in all sorts on the first day of the 1st Test. Again, i'm going to lean towards England and go against the 'history' narrative. Weather looks like it's going to mess with the 1st day, which may play into England’s aggressive batting demeanor. The draw is the bookies favourite so be wary with your bowling picks.

Good luck with your teams! 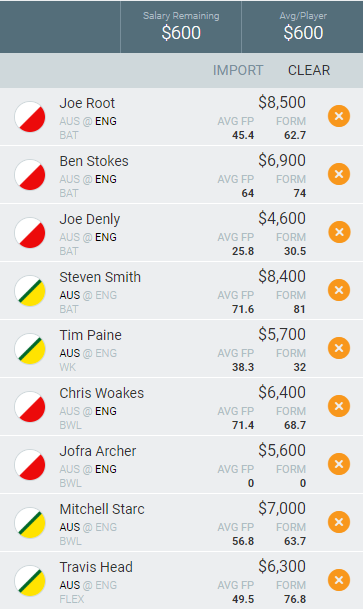