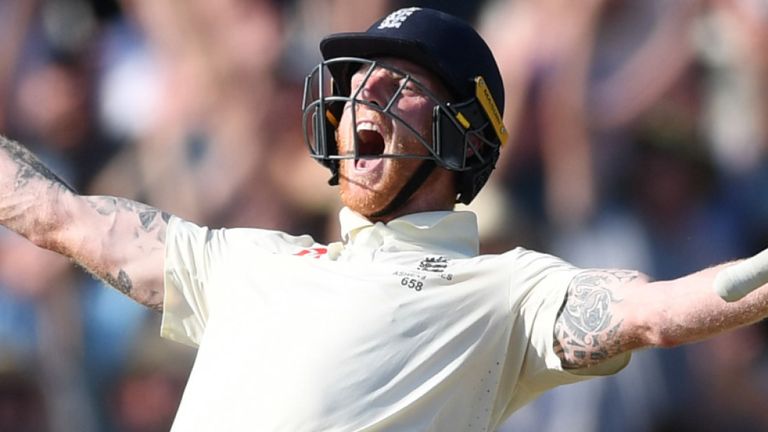 The fourth of a five Test Match Ashes series between England and Australia will get underway on Wednesday the 4th of September at Old Trafford in Manchester. The series is now tied at 1-1 after the heroics of Ben Stokes, successfully chasing over 350 on the fourth day in Headingley.

Old Trafford in Manchester is a venue where England have not lost a Test Match since 2001. Australia played here in 2013 in a rain-affected match that ended in a draw. On that occasion, Michael Clarke scored 187 out of a total of 527. It was interesting to see that David Warner batted at 6 and Mitch Starc scored 66 not out here. Graham Swan picked up 5 wickets in that match but went for plenty. In recent Test matches at Old Trafford, Moeen Ali has secured multiple wickets in either 3rd or 4th innings including 5 wickets against South Africa in 2017 and 3 wickets against Pakistan in 2016. Note the venue was not used in the Summer of 2018.

Early reports are that the wicket is hard and fast with plenty of bounce but is expected to turn later in the test.

In team news, at the time of publication, we know that Steven Smith will return to the Australian side after a concussion kept him out of the 3rd Test at Headingley. As for the make-up of the rest of the team, like the previous matches throughout this series, this is pretty much a ‘horses-for-courses’ mentality from the Australian selectors. I will update this article when news out of Manchester confirms whether more changes are going to be made. I’m expecting a bowling and batting line-up change for the final XI.

For England, in what could be said as an ‘embarrassing’ situation, Joe Denly will open with Rory Burns and put the woefully out of form Jason Roy at 4. There is also talk that Chris Woakes could be given a rest for Sam Curran (UPDATE - Craig Overton has been named in the XI for Woakes). Woakes has seemed to be at the back of Joe Root’s mind, preferring to throw the ball to Jofra Archer or Ben Stokes for another spell than giving Woakes a bowl. I'll mention Overton below on his prospects.

For the Weather you can check the latest forecast here. The forecast for Manchester is typical English weather, the threat of rain is more apparent on Day 3 of the Test. Nothing out of the ordinary to bring the draw into play at this stage though.

One particular resource you can use is the Player Performance markets on various Online Bookmaking sites. On BetEasy a simple formula of 1 point per run, 20 points per wicket and 10 points per catch are used for each cricketers performance. This is the same scoring system as Draftstars, so the markets have done the hard work for you. The highest line has been set for Ben Stokes, through to Jason Roy who is anticipated to have the lowest ‘perfornance’.

With Australia changing the top 6, there can be cases made for those who are selected as this pitch will be suited to this batting attack. David Warner showed good glimpses in the 1st innings at Headingley scoring 61 but was trapped in front in the 2nd innings for a duck. UPDATE - Usman Khawaja has been left out of the final 12 man squad which will see Marcus Harris retain his spot. With Marnus Labuschagne grabbing his chance by the horns and securing a spot in the side, Marnus will slot into number 3 in the batting order. At his price point and the ability to bowl some spin if required, he is a fantastic play. Steven Smith is back and looking to keep going where he left off (which is extraordinary). Surely he can’t keep his current form with the bat going? At his extreme price point on Draftstars it will be hard to fit in other pieces in your side. Travis Head has been hot and cold this series and his price on Draftstars could see him garner low ownership, as he is sandwiched between Warner and Laubschagne. Matthew Wade has retained his postions and will bat at 6. Wade is a low owned dart if he keeps his place in the side. Tim Paine, to be honest, is only there for his keeping and if you eek 40+ runs out of him, well then that’s a bonus.

England, as mentioned, are going to mix up their top 6 as well. Rory Burns has a new partner in Joe Denly and it will be interesting to see if these two can hit it off. Burns has been worked over by the Aussie quicks with short pitch bowling, so tread carefully if you are selecting him in your teams. I don’t know what to make of Denly to open - hardly any experience in opening in County cricket but opportunity brings optimism for runs. I keep selecting Joe Root, and he keeps getting out cheaply except for his 77 in the 2nd innings at Headingley. Outside of Stokes and Smith, his salary is higher than other Batsman on the slate on Draftstars – it’s hard to pick him on Moneyball when Ben Stokes is $700 cheaper. Jason Roy at 4 is an interesting play and I believe he will be high owned. Roy doesn’t have to face the new ball and is just above the bare minimum on Draftstars. You will need to play him if you want to afford the more expensive options in this contest. Ben Stokes is now batting at 5 and you must do whatever you can to get him in your sides. The Captain has made him the key man of this series with the bat and ball and he has certainly produced on the biggest stage. He is an easy fit on Moneyball but Draftstars will make you work to get him in. If England do bat first in this match, then shares in Jos Buttler and Jonny Bairstow must be considered as we haven’t seen a side post over 400 runs except Australia’s 1st innings in Birmingham (which was the 1st test).

My plays - Stokes, Roy (boom or bust), Warner, Smith (A lock on MB, and only if you can afford him on DS) and Bairstow as a ‘sneaky’.

After rolling the Poms for 67 then not getting the job done in the 2nd innings in the Third Test, we have another round of speculation on who will make up the bowling attack for the Australians. There is a three-day break between the fourth and fifth Ashes Tests, almost certainly ensuring the attack will change. And the growing expectation is that selectors will also look to freshen up their pace battery at Old Trafford. The talk is for the inclusion of Mitch Starc and being named in the final XII gives a big chance he plays at Old Trafford. I’m not so bullish with Starc but these conditions should suit if he’s going to employ the chin music (plus the footmarks for spinners later in the test match). As for the rest of the bowling attack, I am keen on Nathan Lyon, especially if he can bowl in the 4th innings of the test. Bounce and spin are his weapons and Old Trafford could be an ideal venue for Lyon. James Pattinson has been left out of the final XII so make sure he is not apart of your lineups. Josh Hazelwood is a very safe play, especially if overhead conditions suit his line and length. Hazelwood is not trying to swing the Duke ball like in his previous tour back in 2015 and he’s just hitting a great line and length. He does have a fair salary on both sites and may go under owned compared to other options on the slate. Pat Cummins is pretty expensive on both sites and is hard to get to without cheaper options available – he’s a fine play if you can get to him. Peter Siddle has been named in the XII and whether he plays will determined at the toss. Contrarian play if Siddle is picked.

Chris Woakes has been omitted from the final XI and will be replaced by tall fast bowler in Craig Overton. Overton is a very cheap option on the sites and now opens up the higher priced pieces of your lineups. Jack Leach is in play here with his spin not being utilised so far in this series. Leach may have a role to play if he indeed gets to bowl in the 4th innings in this match. Stuart Broad and Jofra Archer pick themselves, but Archer’s high salary means you need to get funky on Draftstars, but he is pretty cheap compared to Pat Cummins on Moneyball. Broad, however, has a nice price and must be considered if you think England will go 2-1 up in the series.

As it stands, the match is a coin flip in terms of the result. The series is truly alive after the mad hour at Headingley and should be an enthralling contest. I found it more difficult to construct lineups without confirmed XI’s, so make sure you keep an eye on our Twitter for late breaking news on teams.

Good luck if entering teams and keep an eye out on the toss and teams on Wednesday evening. 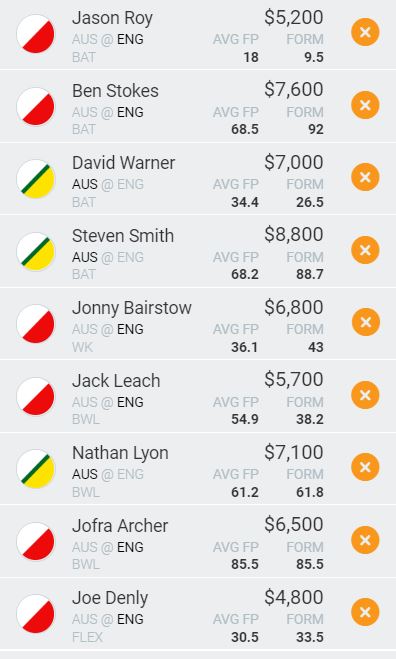 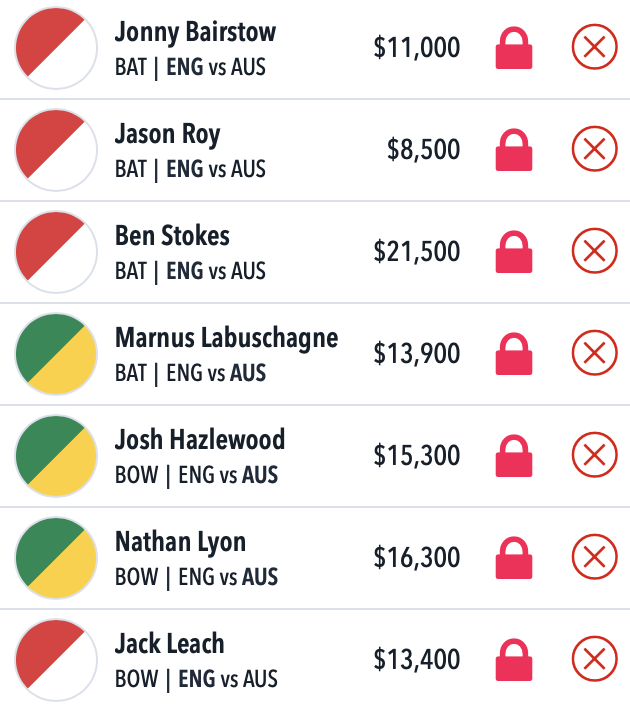