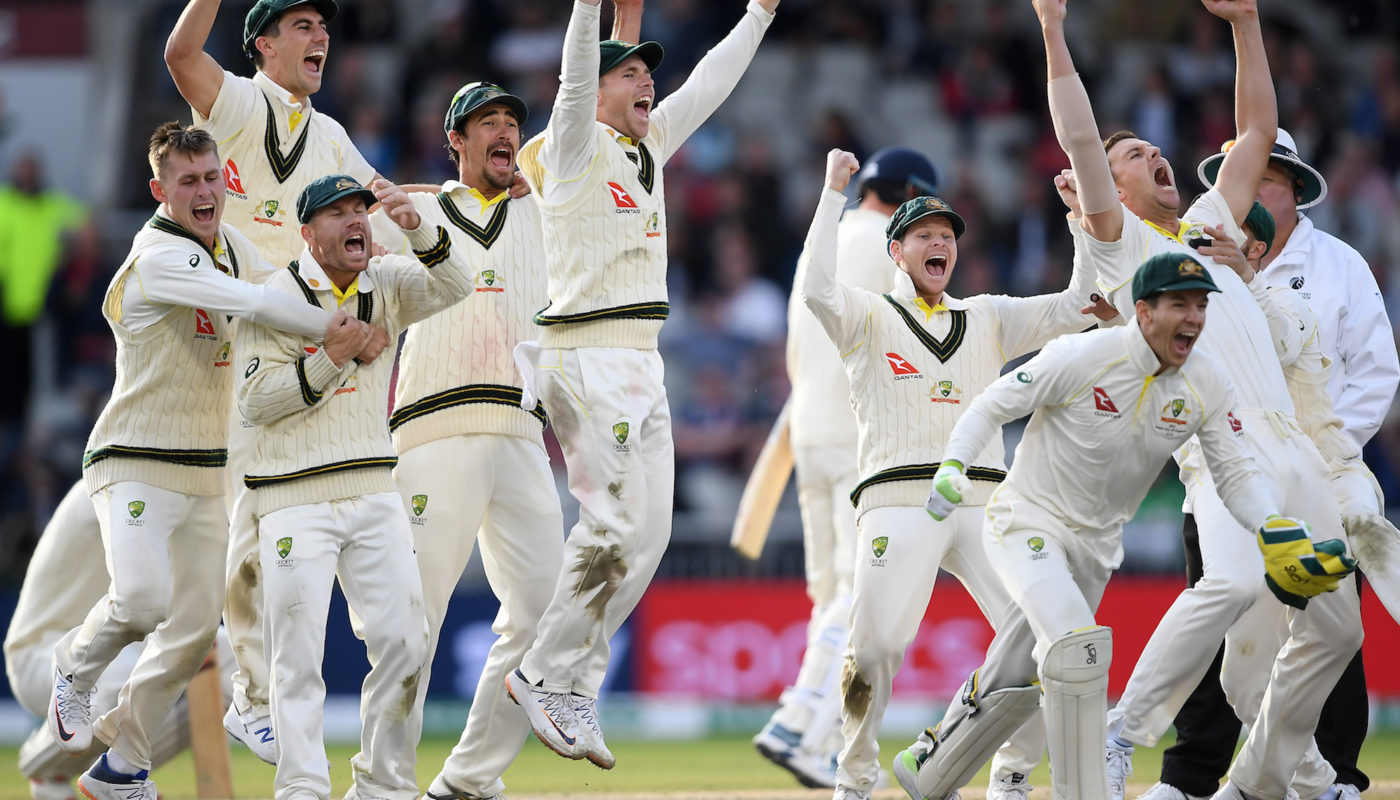 The Fifth of a five Test Match Ashes series between England and Australia will get underway on Thursday the 12th of September at The Oval in London. Australia take a 2-1 series lead after winning the 4th Test in Old Trafford and will be looking to win the series by either winning or at least drawing the 5th Test. Points for the ICC Test World Championship are important to both sides, so this match will not be treated as a 'dead rubber'.

The Oval is a venue blessed with a rich sporting history, which includes playing host to the first Test match on English soil, a game in which WG Grace scored a century in England’s win against Australia in 1880. Significantly, it was at The Oval that the legend of the Ashes was born and where the great Sir Donald Bradman played his final Test innings. Last Summer, Sir Alistair Cook played his final Test innings here; scoring 147 in the second innings helping England defeat India by 118 runs. Back in 2015, Australia thrashed England by an innings and 46 runs. Steve Smith scored 143 in the 1st innings as Australia piled on 481 - Australia rolled England for 149 and made them follow on. Australia did however lose the series 3-2 back in 2015.

Early reports of the pitch indicate the Oval will be a fair battle between bat and ball.

In team news, England have named thier final XI that includes Sam Curran and Chris Woakes who both missed the 4th test. Ben Stokes did suffer a shoulder injury in the 4th Test and whilst his place in the side is assured, England have indicated that he will not bowl in the Test. Thus Jason Roy and Craig Oveton have being dropped from the side.

For Australia, with the carrot of a series win on the line, selectors may rotate their bowlers once again due to bowling loads, especially in Pat Cummins and Josh Hazelwood. Although, whether this occurs with a win on the line, I am not so sure. Travis Head however has been dropped with Mitch Marsh to play as an all-rounder in the Test.

For the weather, you can check out the forecast here. At this stage we are looking at no interruptions and sunny conditions throughout the match.

One particular resource you can use is the 'Player Performance' markets on various online bookmaking sites. On BetEasy, a simple formula of 1 point per run, 20 points per wicket and 10 points per catch are used for each cricketer’s performance. This is the same scoring system as Draftstars, so the markets have done the hard work for you.

This Test match has the “Special One” in Steve Smith as the highest projection whilst, again, Matthew Wade is the lowest. One theme you can see is that Bowler markets are much higher than Batsman, so bear that in mind when building teams. 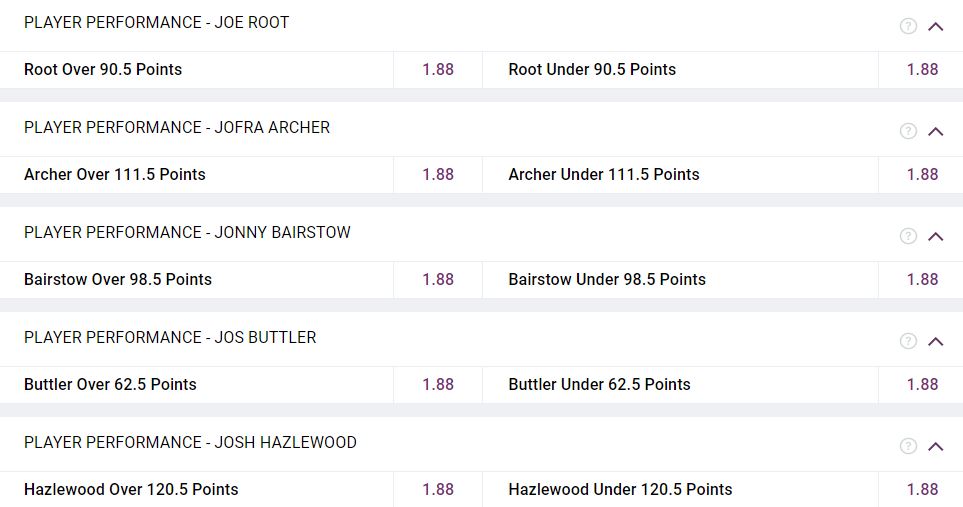 What can we say about Steven Smith? It has been essential to roster him in fantasy if you had any chance of cashing your lineup. When does the conservation start to looking to fade? Just look at his salary on Draftstars and you can mount a case to fade. But when a player essentially scores double the points of any other player in the contest, it is scary position to find yourself in with such a handicap. For the rest of the Australian lineup, outside of Marnus Labuschagne it has been a torrid time finding a reliable batsman. David Warner had a pair of ducks in the 4th test, so the only way is up for him. He really needs to survive the new ball and the round the wicket tactics from the English bowlers. Marcus Harris is not far behind Warner and surely is due as well. Marnus Labuschagne has been priced up on the sites and will be a popular play as he can bob up for a sneaky wicket. Mitchell Marsh has been selected to play for Travis Head and is a guaranteed highly owned play. Marsh is dual position on Draftstars and is really cheap to roster. Whether he produces a quality fantasy score, that remains to be seen. Matthew Wade and Tim Paine are again low owned, low salary darts. Although there is life in Paine who scored 83 runs over two innings and a couple of catches throughout the 4th Test.

For England, the opening partnership between Joe Denly and Rory Burns has potential. Denly really did knuckle down to keep his wicket in the 2nd innings and scored a gritty 53 and confidence will come from that. Burns also kept grinding away with a great 83 in the first innings, meaning he is England’s second best batter for the series outside of Ben Stokes. Joe Root’s yo-yo series continues to baffle fantasy players - either makes a lot of runs or gets out for nothing. Hopefully this will not continue and I will be backing him in here to make a big score. I will not recommend rostering Ben Stokes. Stokes suffered a shoulder injury bowling in the 4th Test and if picked he will bat at 5 only. As the third most expensive player on the slate on Draftstars, I will be spending my money elsewhere. Like Wade and Paine, Jos Buttler and Jonny Bairstow are low owned, low salary darts. Although since Jason Roy has been dropped, these two we go up in the batting order and become interesting in thier output.

In a series dominated by the ball over the bat, we were let down by the English bowling attack that only took 14 wickets in the 4th Test. With Ben Stokes hampered by his crook shoulder, I expect a change in the bowling attack for The Oval. Both of Chris Woakes and Sam Curran have being recalled to the English side, their salaries on Draftstars are around the mark and will be lowed owned. Stuart Broad has been England’s series leading wicket taker at 19 wickets and can be relied on to take David Warner’s wicket if he plays. Jofra Archer with 16 wickets in the series only took three late 2nd innings wickets in the 4th Test; salary is still particularly high on Draftstars but affordable on Moneyball. Jack Leech only took one wicket in the 2nd innings for a total of three including the previous Test. If reports about The Oval pitch are conducive to spin, then we can look at Leech. At this stage, however, I will focus on the fast bowlers in this match.

Having Nathan Lyon’s spinning finger put back together with superglue wasn’t ideal and we missed out on a huge bag in the last Test. I am not sure he will feature as the number one weapon here, but he is priced towards the cheaper side on Draftstars more than Moneyball. Pat Cummins has had an excellent Ashes series and is clearly the number one bowler in Test cricket. I’ll be doing anything to get Cummins into the side. If Cummins is given a rest, then this opens up the slate big time. Mitch Starc bowled like Mitch Starc does, wayward and expensive. In DFS however, that does not matter and I like him a fair bit here. Another bowler that needs serious attention is Josh Hazelwood. Hazelwood with six wickets at Old Trafford is perfect if you are playing Head to Head or 6 man contests. Whilst I will do what I can to get up to Cummins, Hazelwood is still a great play. Alas though, Cummins or Hazelwood may get a rest from the selectors which brings Peter Siddle into play. Siddle is fresh and could be an ideal last piece if he does get a bowl. 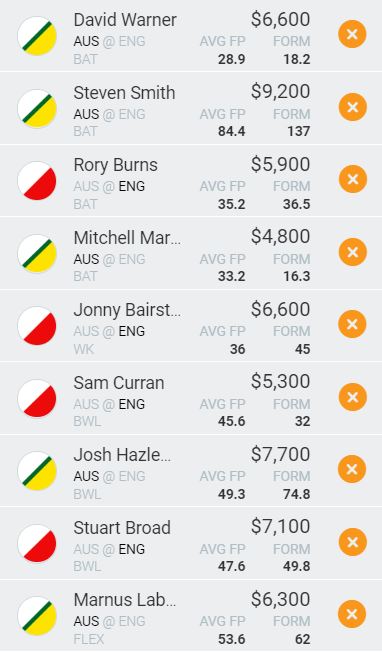 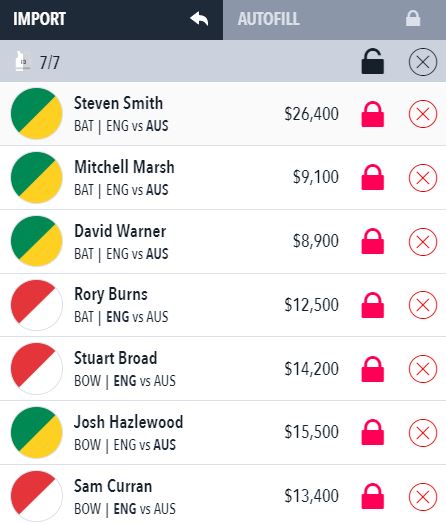