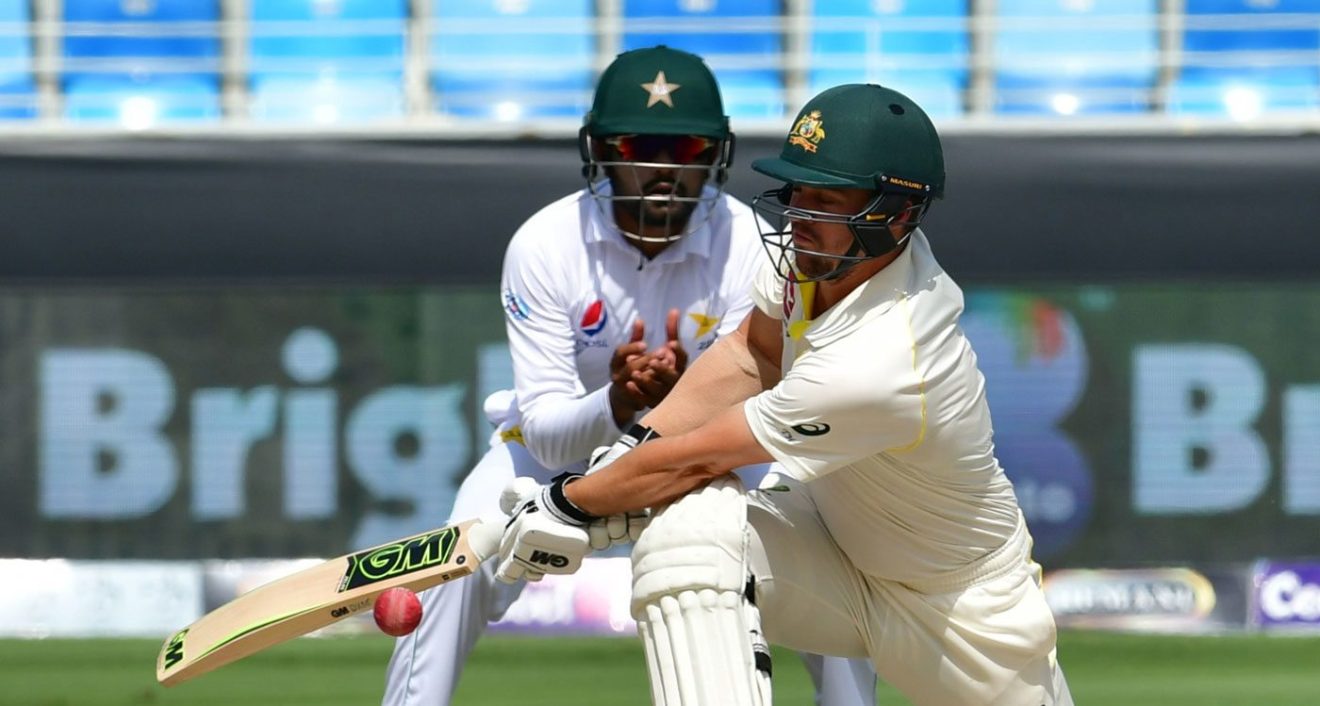 The “official” start of the Australian International summer starts with Australia taking on Pakistan in the 1st Test at the ‘Gabba in Brisbane. This is the first test match since Australia’s defeat to England in the 5th Ashes Test in England. For Pakistan, remarkably, this is the 1st Test match since January this year where South Africa defeated Pakistan 3-0 in South Africa. This series is included for the ICC World Test Championship. The Test match gets under way on Thursday at 1100 AEDT

Pakistan’s record in Australia is down right awful with only 4 Test wins ever and the last Test win was in Sydney in 1995 (24 years ago). They do however have brought out a young and inexperienced side with big wraps on teen fast bowler Naseem Shah. As we have seen in the T20 series, Babar Azam is in some great form with a hundred in Australia A match in Perth.

For Australia, another opening partnership change with Joe Burns likely to partner David Warner who kept the doubters at bay with a huge T20 series against Sri Lanka. We shouldn’t see too many surprises in the final XI from the hosts. For Pakistan, Imran Khan will probably be the likely exclusion in the Pakistan bowling attack after playing in the recent tour matches against Australia A and CA XI.

The ‘Gabba has been an absolute fortess for the Australian Test Team who have not lost a Brisbane Test since 1988. No issues with the weather in Brisbane so expect a result in this Test Match.

We all know Steven Smith is a special player but the extreme salaries on Draftstars ($23,800) and Moneyball ($9,200) make the rest of your decisions throughout the rest of your team more restricted. Draftstars have bumped the Australian Batsman salaries up in anticipation of the dominance in this Test and is really hard to jam multiple Aussie bats. David Warner will relish being at home and is at a much better salary to start your builds. Marnus Labuschagne at 3 will give the Aussie fans a big chance to see the Ashes ‘champ’ flourish at home. Hard to trust the remaining middle order for Australia but Tim Paine’s salary is just too cheap considering you get 10 points per catch and stumping.

From the practice matches in Perth, Pakistan have some batsman in form including big scores from Asad Shaqif and Babar Azam against Aus A and Shan Masood against the CA XI. Captain Azhar Ali is also a great selection after scoring a bucket load of runs in the Pakistan Quaid-e-Azam Trophy (First Class) after the ICC World Cup. Like Paine, Mohammad Rizwan who is the keeper is pretty cheap on Draftstars at $8,500 and is fine if you need to find a salary saving play.

Number 1 ranked Test Bowler Pat Cummins is the most expensive bowler on the slate but is well worth the money. Australia will take 20 wickets if Pakistan bats first and you want exposure to the Aussie quicks if this is the case. With Mitch Starc, Josh Hazelwood and Nathan Lyon all around the same salary on Draftstars you will need to make a stand on one of these. I am leaning towards Starc for his tail wicket taking ability. If Naseem Shah is picked then he is also a great option at the minimum salary on Draftstars. Mohammad Abbas leads the inexperienced pace attack who will rely on spinner Yasir Shah to attack the Australian batsman. All Pakistan bowlers will be low owned but are fine plays if you cannot afford the Australian bowling attack.

You cannot dispute the fact that Australia are $1.20 favourites at a ground they simply do not lose. You will need to find some low owned plays to be contrarian in your lineups and hope some chalk plays do fail.

Good luck with your lineups! 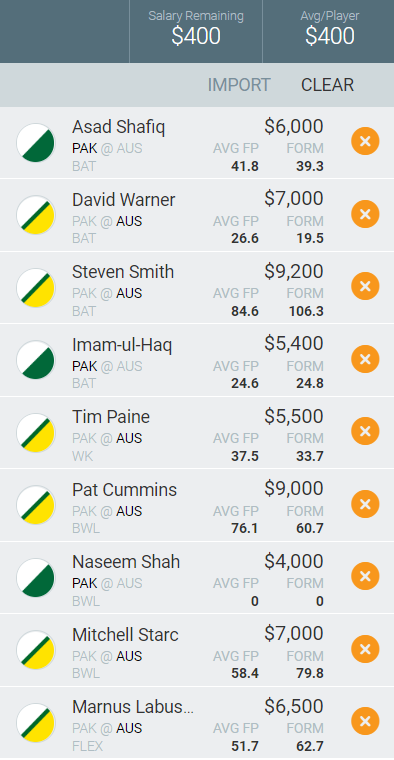 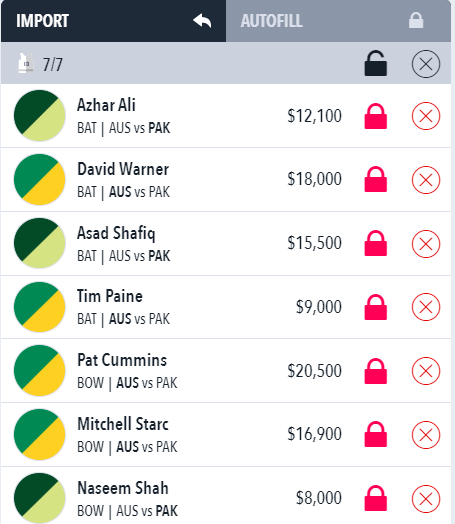