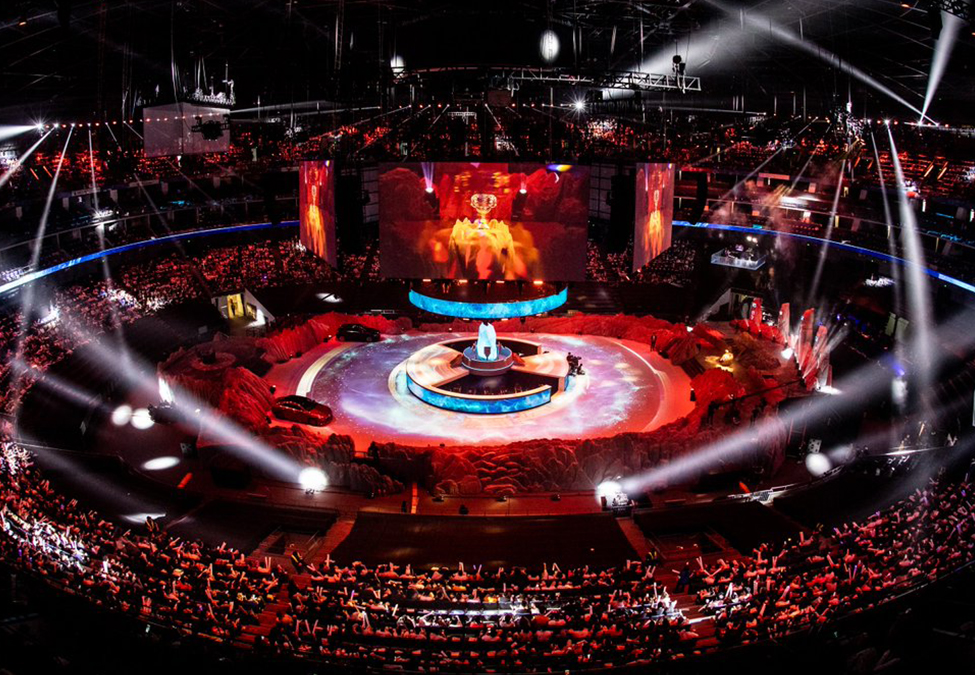 Welcome back to Friday’'s League of Legends preview for DraftKings where league action continues in Korea and China.

Today is a 6 game slate that combines the LCK (South Korea League) and the LPL (China League) with 3 matches in each league. These matches are the best of 3 games.

Two big favourites in the LPL and two big favourites in the LCK. But with a sizable amount of upsets occuring in the both leagues it has been one of those weeks leading into the playoffs. Dominus Esports (3-7) are coming off a huge win against LNG Esports, whilst eStar (9-2) lost 1-2 against Vici Gaming which broke a 5 game winning streak. eStar are now slight favourites against a strong Royal Never Give Up (6-3) who have won 3 in a row and will look to knock off the current league leaders. In Korea, Gen.G and T1 do look easy wins but the final match between the struggling Afreeca outfit (6-7) losing 4 matches in a row up against Damwon (6-7) who have won their last two.

With thanks to rotogrinders.com here is today’s overall slate breakdown with the teams overall performance for the Spring season. As with the Bookmaker’s odds above, the team stats clearly show 5 standout teams on today’s slate. LPL’s eStar, Royal Never Give Up, Invictus Gaming and Edward Gaming all have high Kill to Death Ratio but the slate leading team is LCK’s outfit Gen.G at 2.15 K:D ratio.

I could of mentioned T1 above as well with a K:D ratio of 1.54 but due to the average kills per game at 11.9 (significant lower than other slate leading teams) and on some Vegas books the Kill over/under is set at low 19.5 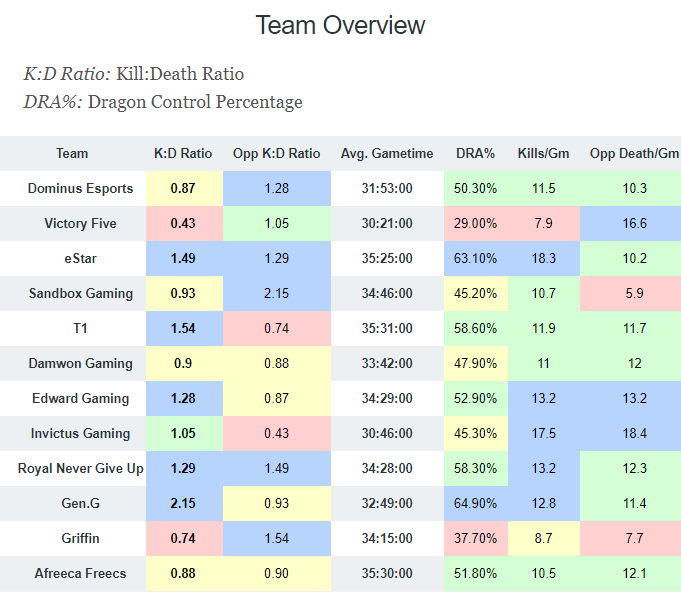 Thanks to rotogrinders.com today’s MID selection has an interesting selection of participants. Despite only having a 2.94 KDA ratio, Rookie from IG is the highest projected MID position player on the slate. Cheaper than ES MID Cryin and team mate ADC Puff, Rookie ($8,200) has been a consistent fantasy scorer with 3 100+ performances in the past 5 games. A player that could go under the radar is MID Showmaker ($7,000) who has scored particularly well in his past two wins. 89 fantasy points against Hanwha and 114 points against APK. 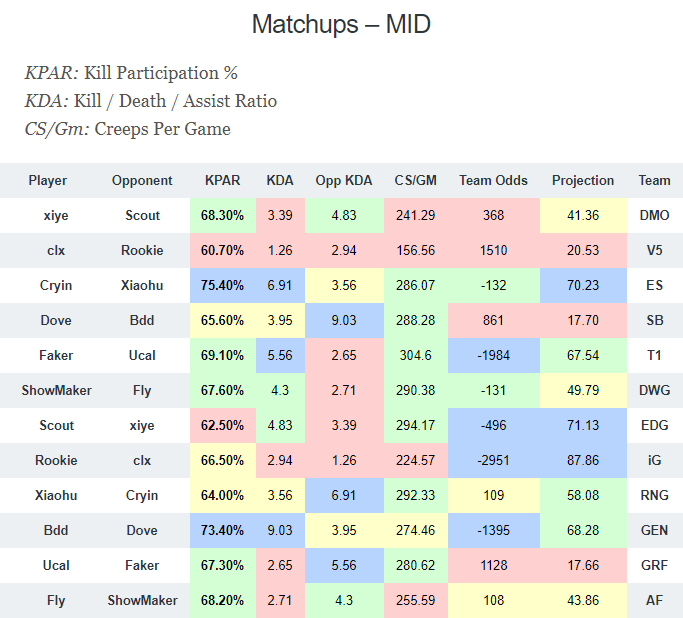 Feature Stack - Royal Never Give Up

Up against heavyweights eStar, this match could either go a couple of ways. RNG could either roll over and let ES have their way or go toe-to-toe with ES and rack up the kill count. The bookies have this close and the kill line is a slate leading 28.5. We get the DraftKings discount on being the underdog and SUP Ming is averaging just on 80 DK fantasy points in the last three matches. Liking the upside here

The safer stack of the slate but if you can make it work in your lineup construction then IG are going to rack up the points against the winless V5. As mentioned, MID Rookie is the highest projected play on the slate and his teammates should feast.