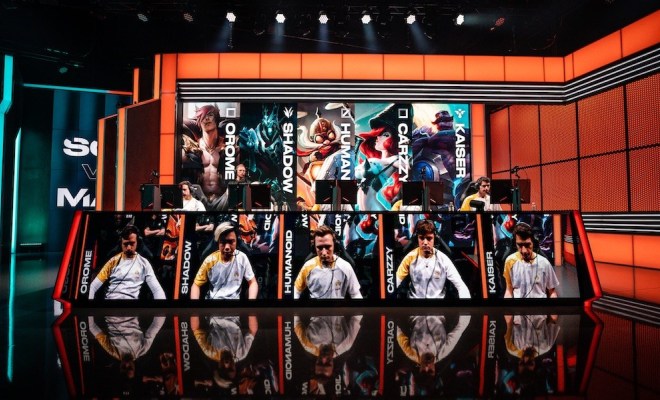 Welcome back to Tuesday's League of Legends preview for DraftKings where league action continues in China.

Today’s feature contest is the LOL $150K Titan’s Fury ($50,000 to 1st) on DraftKings but I suggest to jump in quick as contests have filled everyday quite early.

Today is only a 2 game slate with the LPL (China League) the only league in action. The LCK (Korean League) have their matches from Wednesday through to Sunday.

With just two matchups today with pretty much identical odds for each match. The DraftKings pricing amongst the four teams is on the softer side which means you could construct the stacks from either EG (4-4) and IG (7-1). But alas this will be the chalk construction, especially in deep GPP fields. The dogs in LGD (2-6) and OMG (5-4) do have a tough task against their opponents but are worthy of consideration in contrarian lineups.

With thanks to rotogrinders.com here is today’s overall slate breakdown with the teams overall performance for the Spring season. Invictus Gaming are the clear ‘deadliest’ team with a slate high 17 kills per game on average while allowing only 10.6 deaths per game. Edward Gaming’s 1.31 Kill to Death Ratio is the slate leading and hence the short odds for EG. With only 4 teams to pick from, nailing positions is the key to this slate.

I also want to highlight that the ADC and MID for IG and EG are highly projected, however it is not as clear in other positions on the slate. As below here are the projected starters for the JNG position. JunJia and Leyan have poor KDA so this could be exploited by H4cker and Peanut. Peanut’s KPAR is also of some note which is a slate leading average of 74.10% 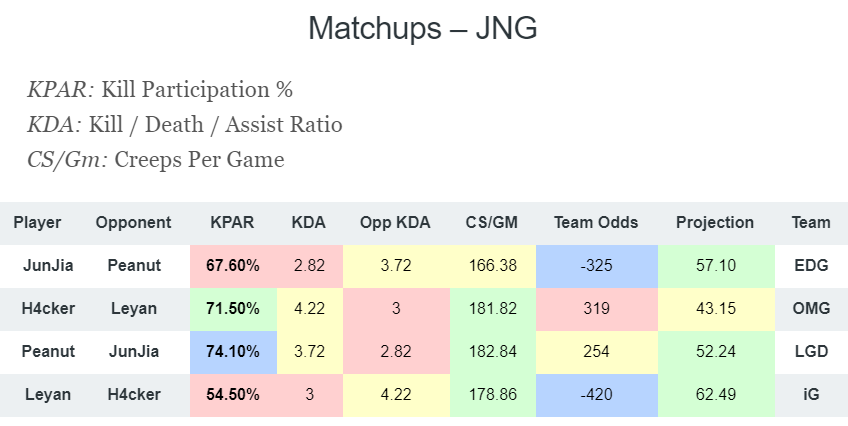 As mentioned, I believe ADC and MID are locks for IG and EG but you can look elsewhere for other positions. Do not be afraid to break out of the 4-3 stack mould in your lineups. I am pretty keen leaning on the upside of the killing power of Peanut along with some pieces from Team EG. Don't be surprised to see some game stacking as well.