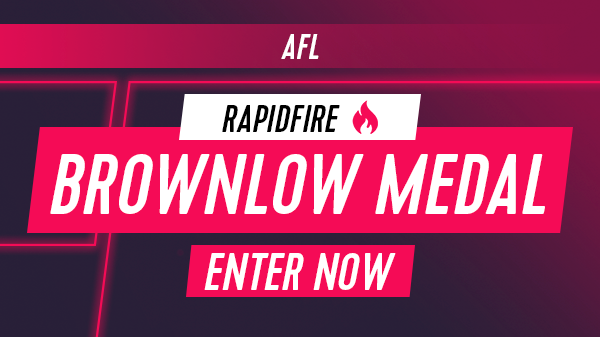 It’s a weekend off from AFL DFS and we all are champing at the bit at the prospects of the $200,000 contest at Draftstars for the AFL Grand Final next week. However for those that can’t wait for their footy fix, Draftstars have put together a Rapidfire contest for the Brownlow Medal on Sunday night.

The good news is that our sports betting partners Before You Bet have been tracking the Brownlow Medal all season, and have a stellar record over the years of being on the money with their Brownlow vote projections.

Draftstars have put together five pretty evenly-matched players for their Brownlow Medal Rapidfire contest, and we wouldn’t want it any other way! We’ll break down each match up below!

The two favourites in the Brownlow betting markets, however we have Wines as a pretty clear winner in this year’s Brownlow Medal. If you’re following the Before You Bet projections on the night, and Wines is ticking over early with some cheeky 1 and 2 vote games, then you’re in good shape. Even if Oliver gets a couple extra early, that’s ok as the BYB projections have Oliver 5.5 votes behind Wines. Happy to take Wines here without much hesitation.

Cam Guthrie polled really strongly last season and, despite missing a few games, he should have too much kick for Sydney’s Luke Parker. We’ve only got Parker best-on-ground in three games, but we have Guthrie a clear best in four games, as well as another two where he polls two. Geelong also won more games throughout the season, so everything points to Guthrie as the play here.

The closest matchup of the Rapidfire card and it truly is a coin flip. West Coast players are always the toughest to predict as their mids are often similar in possession count and influence. Cunnington did miss a number of games but had a couple of standout games and will really only be competing with Jy Simpkin for votes. We have Cunnington polling in six games vs Sheed’s five, but the Kangaroos obviously finished bottom of the table so there’s no room for error!

Another tough one with a slight edge to Tom Mitchell over Darcy Parish. Mitchell is a former Brownlow winner and consistently polls well. He’ll need to poll well in losing efforts to beat Parish, and he’s a good chance to do so. We have Mitchell polling in as many as 13 games, so if he does that, he’ll be right up there on the leaderboard. We only have Parish polling in 11 games but some of those between rounds 9-12 were outstanding. He may poll 12 votes in those four games alone! Has to compete with Zach Merrett for votes whereas Mitchell is often the standout for the Hawks. Slight lean to Mitchell.

We like Taylor Adams here in this matchup, but again, as we mentioned earlier, West Coast players can be tricky. However Andrew Gaff is the sort of player that can have 30 disposals without much influence so happy to take him on here. Adams should poll votes in six games, while Gaff, we scrape in for votes in five games. Adams does have to compete with the flashy De Goey, as well as Crisp and Grundy, but as the player under the umpire’s noses, we think he’s the right play here.

That gives us three pretty confident plays out of the five if you just want to play it conservative with the Rapidfire contest and just go for 1.8x your wager. Or if you’re feeling more like a gamble, then try to win the two coin flip matchups as well for a 20x scoop! Good luck! 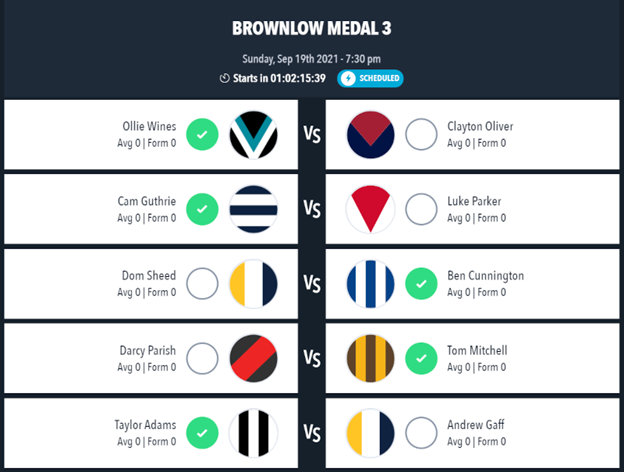 You can also bet on the Brownlow Medal over at PlayUp where they have a range of Brownlow betting markets including team betting, head-to-heads and more!