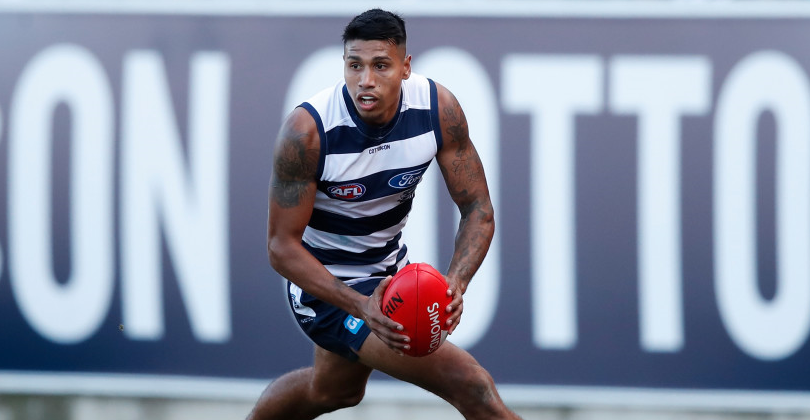 Welcome back! To Super Saturday for another monster five game slate of AFL games for Round 10. The major tournaments on offer for this slate include:

Also note that Moneyball have the target contest for AFL. The target score is set at 1025, with the total prize pool set at $10,618 for the Friday night slate.

CHECK OUT OUR SATURDAY CHEAT SHEET

Richmond have given up the most fantasy points in 2019 of all the teams on this slate. That said, it has noticeably been reducing in recent weeks so the current average isn’t likely to be a true expectation of performance. Gold Coast stand out as the obvious team to attack, giving up the third most points in the league, a trend that has continued on from 2018.

The Tigers backline has been the obvious target all season, but since the return of Bachar Houli they have controlled possession through their own backline more than they have over the past two seasons. The Hawks have conceded the second most points to backs this year, and they are particularly vulnerable to key position defenders.​

Lock and load Geelong midfielders, as is a staple each week against the Suns. The sneaky target, however, will be the Kangaroos who have given up 112 points per player to the opposition’s top 3 scoring midfielders this season.

Surprisingly, Jarrod Witts, could be the top play for rucks on this slate. Geelong have given up the second most points to opposition number 1 rucks this year at 94 points per game. Richmond, Essendon, Western Bulldogs and West Coast are also primate matchups on this slate.

The obvious team to stack on this slate is Geelong who are 33.5 point favourites over the Gold Coast. To make matters worse the Suns have given up the third most fantasy points in the league and it should be a free for all for Cats midfielders as we noted above. My sneaky team to stack will be the Western Bulldogs. They are only 8.5 point favourites against the Kangaroos, but playing at Marvel Stadium I expect them to rack up uncontested possessions.

Ok… let’s break this situation down. Coleman-Jones comes in to replace Ivan Soldo who has been suspended. At first glance you would assume Coleman-Jones should play a significant amount of ruck time. If that is the case, at the bare minimum he would be the top value play on the slate as he also draws a great matchup in his first game at AFL level against Tom Bellchambers, who has given up the fourth most points to opposition rucks this season.

However… at close inspection we can see that Coleman-Jones hasn’t really displayed eye-popping scores at VFL level. Posting just 46, 89 and 67 over his last three rounds. Part of this is due to the fact that in the VFL he still sits behind Soldo as a forward pinch hitting in the ruck. But with Soldo playing AFL last week, Coleman-Jones still only managed 46 fantasy points, from a paltry 9 hit outs.

So I really question how much Coleman-Jones will ruck. It is possible that while the ownership flocks to Coleman-Jones, it is really Balta that is the best value play on this slate. Either way, both are viable options.

Jason Johannisen (MB $7,300, DS $12,340) … back to the well on an old favourite. Johannisen has upside (albeit hasn’t really flashed it this season), and will be extremely low owned on this slate. As stated above I love this game as a sneaky matchup and will look to build several Bulldogs stacks. Johannisen has averaged +7 points per game over his last 7 matches at Marvel Stadium.

Liam Shiels (MB $8,800, DS $14,000) returns to the friendly confines of UTAS Stadium in Tasmania where he has absolutely torn it to shreds recently. He has averaged a whopping 125.5 points over the last four games down in Tassie. He is another player who will be very low owned and might make for a nice point of difference with significant upside on this slate.

Tim Kelly (MB $9,000, DS $14,220) has the best matchup in the league for gun mid fielders going against Gold Coast. After he was held to just 20 touches and 56 fantasy points last week against the Bulldogs, this should make for a nice bounce back opportunity. With Dangerfield out, there will be plenty of ball to around for the Cats in the midfield, and we have seen the GPP winning ceiling from Kelly this year pumping out a 141 point game just two weeks ago. 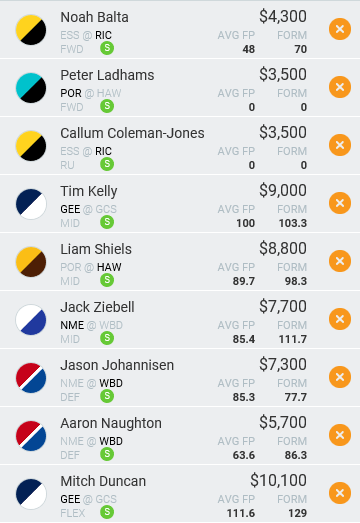