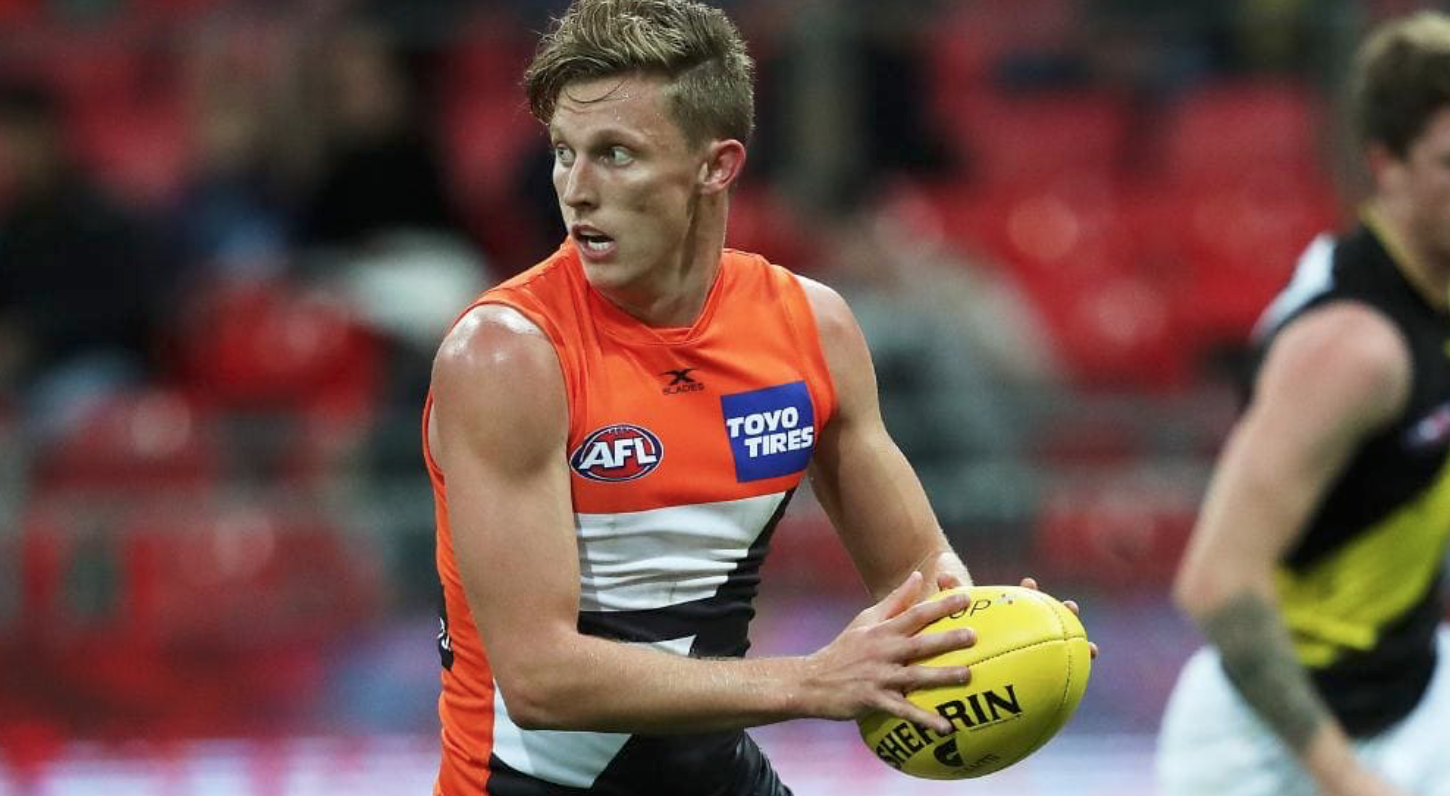 Here we go! Super Saturday Round 11 Edition. We get another 5 game slate to work through with some of the biggest AFL Daily Fantasy Contests on offer this season. The major tournaments on include:

An unlimited number of avenues to attack on this 5 game slate with Gold Coast, Melbourne, Hawthorn and Fremantle all conceding over 1600 points per game, sitting between the 3rd and 6th most in the league. Compounding this is their matchup with each of the four teams being underdogs.

Hawthorn have incredibly moved past the Tigers to be the top team to attack with backs in 2019. This means Brisbane backs will be in an elite matchup this season and should be a unique play given the number of players that will be loading up on Collingwood, GWS and Geelong.

That said Collinwood also have one of the top matchups in the league for defenders with Fremantle giving up 71 points per player to the position in 2019.

Gold Coast are giving up the most points to midfielders for the second straight season and are the obvious target on this slate as GWS go in at over 50 point favourites. If you are looking for a less popular option playing Crows midfielders against Melbourne will be a good option with the Demons giving up 91 points per player this year.

The ruck decision could be tough on this slate with Geelong and Sydney giving up the most points of the teams on this slate. Max Gawn will draw Riley O’Brien who is having a breakout year, but should still be exploitable conceding 86 points per game to number 1 rucks.

This slate is a wet dream stacking teams. The obvious team to target is GWS who are over 50 point favourites against the Gold Coast. Not pointing out this as a great target to stack would quite frankly be malpractice as Gold Coast are close to the best matchup in the league for fantasy scoring. We all saw what the Giants did to Carlton two weeks ago, this could be a similar outcome.

If you are looking be a bit more unique, both Collingwood and Geelong are over 5 goal favourites at home. As mentioned above Collingwood also have one of the top matchups in the league from a fantasy scoring perspective.

Harry Perryman (MB $4,800, DS $9,980) was a player flagged for midfield time from the preseason this year, however he never got a real opportunity after being injured in the first game of the season. He returned two rounds ago to post scores of 104 and 83 fantasy points. Through these two games he has played both across half back and through the midfield. The scores are possibly inflated due to the competition, however things are not getting any harder this week against Gold Coast. He is far too cheap on Moneyball making him a lock and load play on that platform.

Noah Answerth (MB $3,800, DS $7,290) has shown the capability to find the football in defense through his first 5 AFL games. His price is yet to move dramatically from the minimum despite three scores over 60+ during these 5 games. Making this play even better on this slate is the fact he matches up against Hawthorn who as noted above have conceded the most points in the league to defenders this season. Answerth will likely go overlooked on a 5 game slate and will make for the perfect opportunity to pay up for the plethora of premium options through the midfield.

Jeremy Cameron (MB $7,800, DS $13,540) is having the best season of his career through the first half of 2019. His price has dropped after a pedestrian three games by his standards (which still includes a 99 and 90 in the last two). This should make for the perfect bounce back game with the Giants being over 50 point favourites against the Gold Coast. Cameron has historically loved playing the Suns posting +38.6 fantasy points in their last four meetings, including 3 games of 113+. He has also played well at home notching up an average of 101.4 the last 5 times he has played there.

Cameron Guthrie (MB $6,600, DS $11,390) has spent plenty of time in the midfield this season and this has unleashed his fantasy scoring. Patrick Dangerfield returning could have been a red flag, however with him replacing Ablett I expect Danger to still spend a significant amount of time up forward. Guthrie is averaging a career high 86 fantasy points this season and shown 100 point upside on two occasions.

Tim Taranto (MB $9,900, DS $16,080) / Josh Kelly (MB $9,800, DS $16,050)  / Lachie Whitfield (MB $10,300, DS $16,890) … all three of these players are an absolute elite matchup. The Suns have given up the most points in the league to the oppositions top 3 scoring midfielders at a ridiculous 118 points per player. Each of the three players have been in GPP winning form over the past two rounds and if you can find the value to squeeze all of them into your lineup there is every chance that is the basis for the winning team.

Gold Coast have had little interest in tagging this season just doing it the one match, and to little effect, according to our tagger tool: 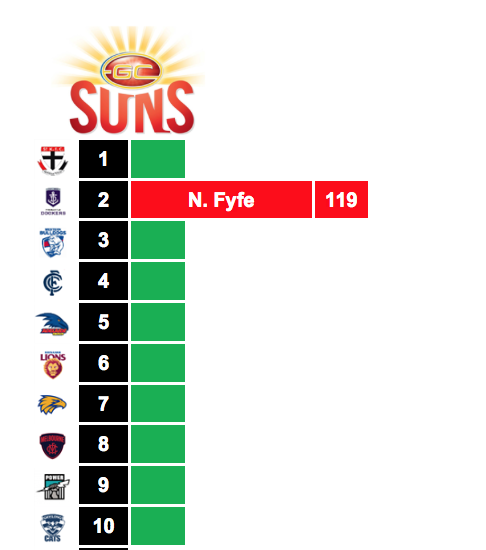 At least one of these midfielders, if not two, should be lock and load plays for your lineups on Saturday.

Jack Crisp (MB $8,600, DS $13,850) is the premium play across the backline if you are going that route. He draws one of the top matchups in the league against Fremantle (as noted above), and brings 140 point upside. 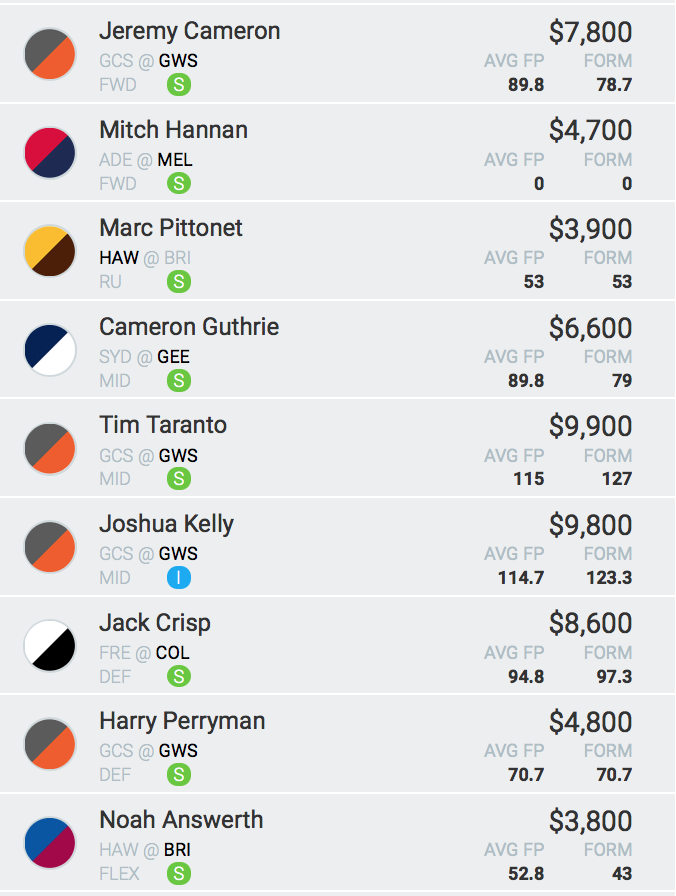