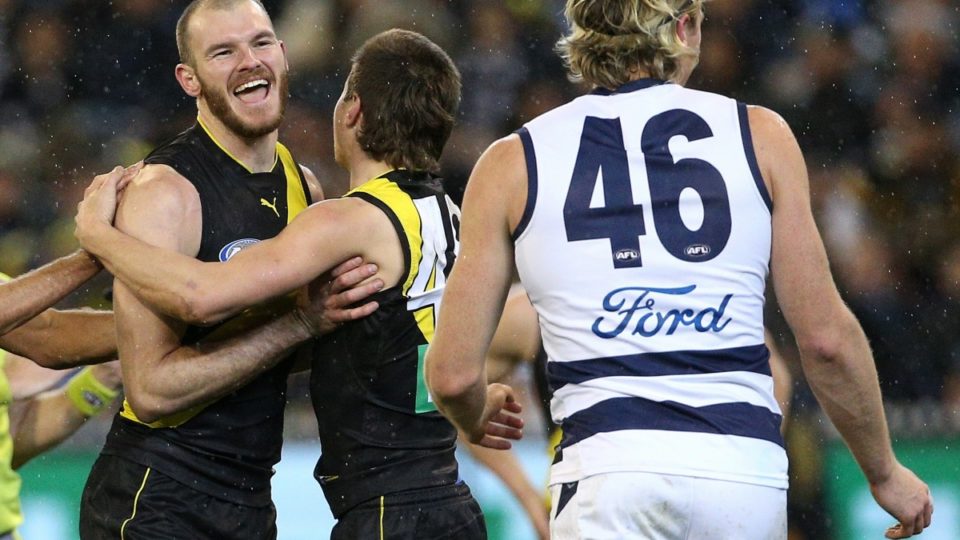 Round 12 of the 2019 AFL Premiership Season kicks off on Friday night with Richmond hosting Geelong at the MCG.

Episode 17 of the DFS Down Under show dropped at the regular time of 8.30pm on Wednesday night. Smatho and Hef ran through all the big news surround DFS in Australia, and provided some great line-up advice for the AFL this Friday night.

CHECK OUT OUR TIGERS VS CATS CHEAT SHEET

As you can see in the graphic below, the Tigers are ranked third for fantasy points conceded this season, while the Cats are ranked 15th. This would obviously mean we’d be better off going with Cats players for the most part, although the Tigers have put on the clamps on over the past five games, ranking ninth for points conceded during that span.

We now look through each position to find an edge, starting with the backs. For the first six or seven rounds the Tigers were the team to stack against here, although they’ve really tightened things up over the past five weeks, conceding the third least points to backs in the competition. The Cats are also hard to score against here, conceding the fourth least points to backs this season.

Now looking at the centres we can see that the Tigers are again the leakiest of the two clubs. They’ve given up the fourth most points to opposition centres this season, compared to the Cats who are ranked 11thhere.

Moving onto the forwards and we can see that that the Cats are the tightest in the competition here. Giving up just 57 points per opposition forward this season, it makes it very hard to have Richmond players here. Unless of course you fancy a big upset or change in game plan from Chris Scott.

Last but not least we view the rucks. The season as a whole has these two clubs giving up the exact same amount of points to opposition rucks. However, over the past five games the Tigers have given up 15 more points to the oppositions number one ruck, compared the the Cats.

Lock and load type play here. If Soldo is picked for the Tigers ruck duty, which we expect he will be with Nankervis out injured, then Soldo should be your first player picked at near basement price. He’s played two games for 75 and 63, which is more than enough for a player of his price.

One of the really obvious choices on Friday night comes in the form of James Parsons for the Cats. He’s averaging 66.5 through his two games and is near basement price. Again, watch the team selections to make sure he’s named.

An interrupted early part of the season saw Guthrie only make his season debut in Round 4; however, he’s now played seven games on the spin for a really solid average of 86. His price tag still hasn’t caught up to his scoring output, making him one of the best mid-priced plays in this fixture.

Another really obvious selection here with Liam Baker. He’s been a real find for the Tigers this year and has also produced fantasy-wise, averaging 80 for the season. His price tag still doesn’t match his scoring output, so take advantage of a discounted Baker while you can.

Yes, we’re aware this is the second ruckman picked here. However, the ‘flex’ position at MoneyBall allows us to play both. We noted above that the Tigers have been leaking points to rucks without Nankervis, which makes Stanley a solid play on Friday night. There is the doubt over his fitness, so you’ll want to keep up to date with the team selections, however, if he’s picked, then he’ll make his way into most of our line-ups.

A quiet first half of the season (by his lofty standards) has Patrick Dangerfield a touch under-priced at around the $9k mark at MoneyBall. He’s obviously a superstar of the competition and loves the big stage and comes into this off a 108 last weekend against the Swans. He’s also got a really high ceiling with 3x 130+ scores this season, making him the standout premium choice for us, along with Dusty for the Tigers on recent form. 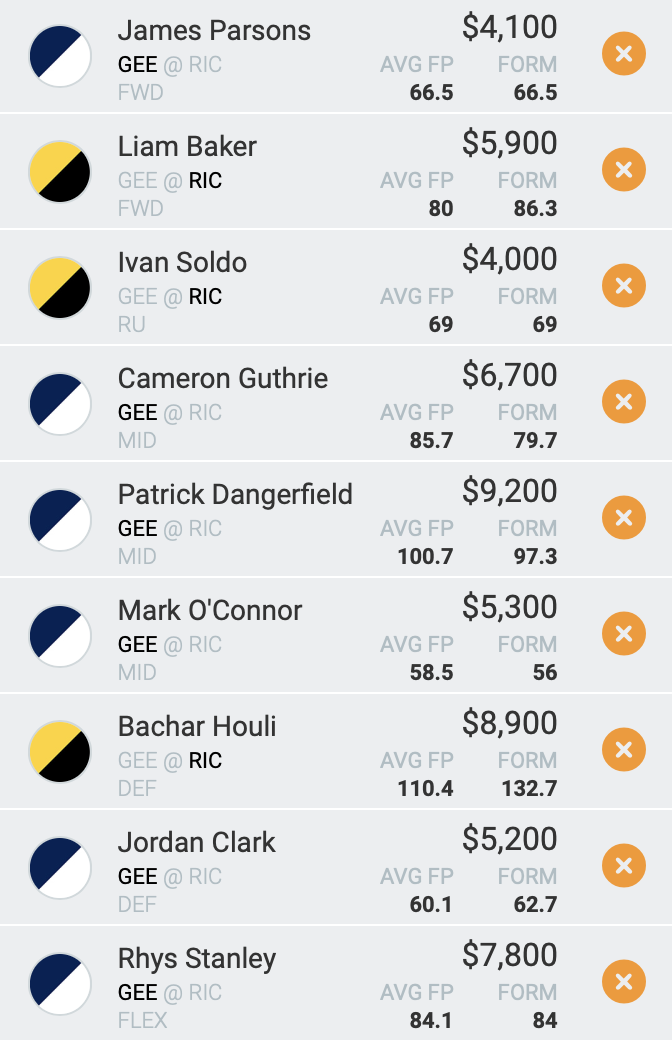