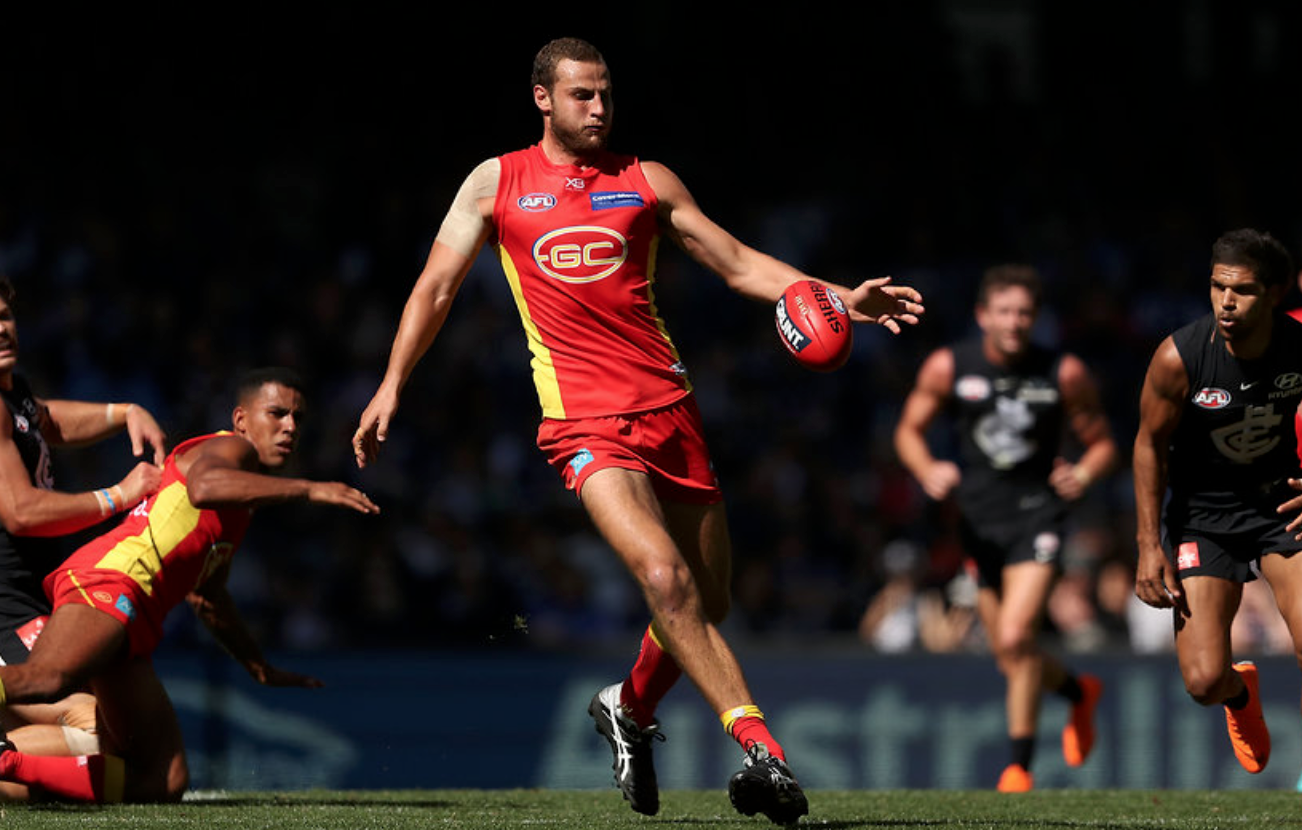 Round 12 brings us the first of the bye rounds in the 2019 AFL Premiership season. Saturday is the only multiple game slate of the round with 3 games to delve into. There are huge DFS tournaments on offer again as the #DFSwars continue, these include:

The midfield is the position to target against both Carlton and Gold Coast. The Suns have given up the most points in the league to the position, conceding a whopping 122 points per player to the opposition's top three scoring midfielders. Carlton are not far behind conceding 115 points, while Adelaide can also be targeted.

No surprise to see that the Suns have also given up the second most points in the league to forwards. Carlton also concede points to opponents up forward, while GWS and Adelaide have been two of the stingiest teams in the league to the position this year.

Carlton have been the team to target all year in the ruck. However, as mentioned last week, with Kreuzer back into the side I expect this to come down significantly (and Kreuzer soundly beat Bellchambers last week). Rain is expected on the Gold Coast this weekend meaning that rucks in that contest should be in line for big scores. Jarrod Witts factors to be the best choice in that game given he has conceded just 67 points per game to opposition rucks this year.

Archie Smith (MB $4,300, DS $7,100) looked to be taking a bigger role in the ruck in his first game of the season last week as the Lions are likely preparing themselves for life after Martin. Smith posted 57 points in his first game last round and his price has not seen any significant increase. On this slate the Lions have the top ruck matchup in the league (although as I mentioned above with Kreuzer back that is possibly fools gold). We can see from our ruck tool, however, that Smith spent significant time in the ruck last week racking up 47% of the Lions total hit outs. 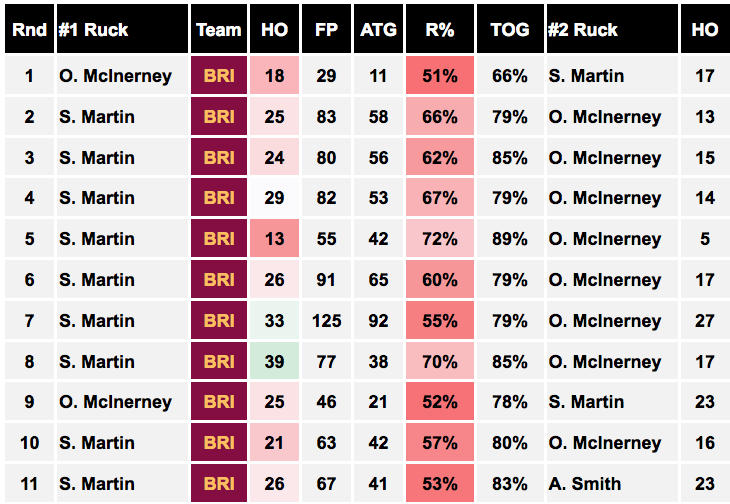 Cameron Raynor (MB $3,900, DS $6,530) is another value play from Brisbane that looks somewhat appealing on a slate starved on any real obvious value plays. At just above the minimum price on Moneyball, Raynor has shown improving scores the last two rounds with 50 and 56 points respectively. On this slate he draws one of the top matchups in the league against Carlton who have given up the third most points in the league to forwards this season.

Harry Perryman (MB $5,300, DS $11,190) price is creeping up after posting three straight scores of 80+ fantasy points, including one tonne. Perryman has played predominantly through the midfield these last two games, which is a role that still makes him solid value at this price point. Adelaide are also one of the top matchups in the league for midfielders giving up 89 points per player this year.

Jarrod Witts (MB $9,100, DS $14,390) is my favourite ruck on a slate that offers limited obvious opportunities. If that rain kicks in he will become a lock and load play. His price has risen recently due to Witts being in top form posting back to back scores of 110+ fantasy points. Last year in round 1 Witts played against Todd Goldstein and North Melbourne in the wet (actually a monsoon/hurricane combination) and posted a massive 140 points.

Jack Ziebell (MB $8,100, DS $13,750) was back in the midfield full time last week under the new coaching regime. Let’s face it, Rhys Shaw isn’t going to let this opportunity to impress taking over as caretaker coach by playing Norths best player full forward. In the five games Ziebell has played through the middle this year he has posted 4 tonnes. This round he has the top matchup in the league for an inside mid against the Suns and he is well suited to the wet if those conditions hit. There were slippery conditions down in Tasmania in round 9 where Ziebell posted a massive 155 fantasy points.

Rory Sloane (MB $9,600, DS $14,000) looks like he will be playing this week despite hitting the bench early late in last weeks game. If he is in he should be an obvious fade this week with Matt De’Boer looming ready to squash someone for the Crows this week. Sloane is typically the obvious target as he has struggled to handle tags in recent weeks and De’Boer has been putting on a clinic in a tagging role this season as shown in our tagging tool: 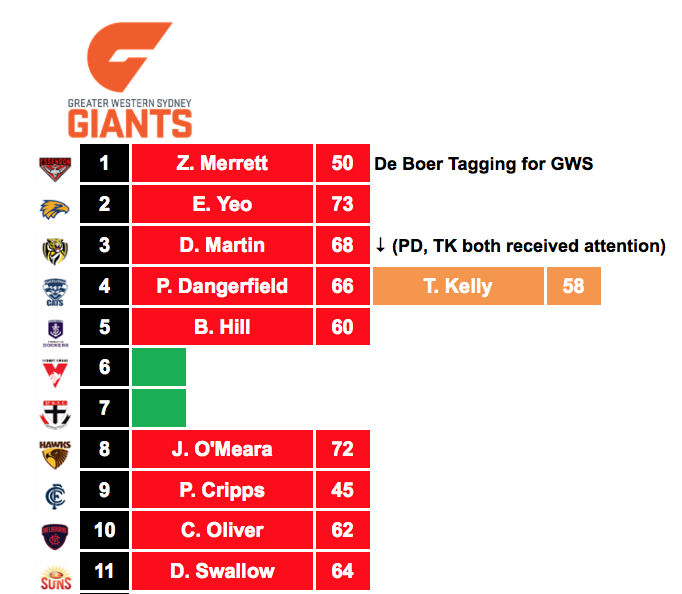 If Sloane doesn’t play be cautious with the Crouch brothers or Rory Laird. 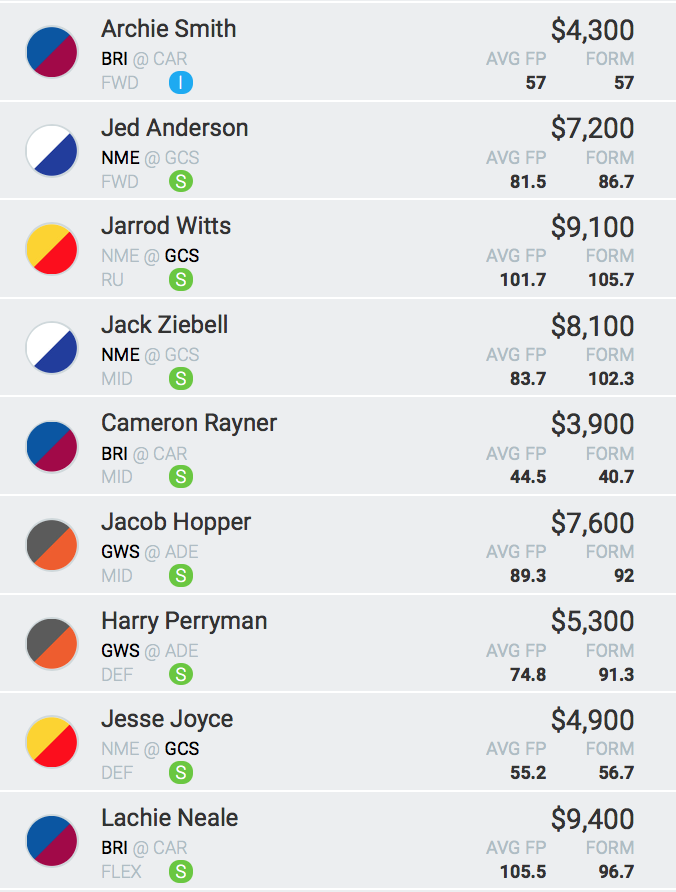