Just the one game on this weeks Sunday slate for Round 12 of the AFL season as we hit the bye rounds. Former rivals Sydney and West Coast will square off at the SCG, a where the Eagles have not won at in 20 years. The major tournaments on offer for this slate include:

Here is what the bookmakers' think:

West Coast and Sydney are both sitting around league average this season for points conceded. The Eagles have given up 1,571 fantasy points this season, while Sydney have conceded 1,517.

Sydney have been a side that can bet attacked via the midfield, in particular the top scoring players in this position have gotten hold of the Swans this season. Sydney have conceded 110 points per game to the opponents top 3 scoring midfielders, which is the equal fourth highest amount in the league.

Both Sydney and West Coast have been weak in the ruck this season. Each team has conceded 91 points per game to the opponents number 1 ruck in 2019, which is the equal 6th highest amount in the league. This round the Eagles have brought back Tom Hickey which should improve this to a degree.

Colin O’Riordan (MB $4,300, DS $8,280) … on a slate devoid of any obvious value a few fliers will be needed. O’Riordan will be playing across half back with the opportunity to pick up cheap possessions as he did in the last game against Geelong where he racked up 80 points. There are more touches to go around with Harry Cunningham out of the lineup and he would also make sense to pair up with another Sydney back such as Jake Lloyd.

Tom Hickey (MB $6,600, DS $9,930) should take over the majority of the ruck duties from Nathan Vardy. Hickey has shown the upside he can bring already this year, topping 100 points two times in six games this year, including a massive 141 points against Geelong. This is his first game back from injury and as noted above he has drawn a positive matchup against Callum Sinclair. Hickey isnt as easy to score against as Sinclair historically and he also comes in as the cheaper option. This is a lock and load play for me.

Luke Parker (MB $9,200, DS $13,960) has been playing more consistently in the midfield now that Josh Kennedy is out with injury and he responded. With three straight scores over 100 fantasy points including a season high of 131 points, he is looking more like the Parker of 3 years ago.

Jack Redden (MB $8,600, DS $12,920) is another injury related play. With Elliot Yeo not expected to play on this slate the Eagles will need reinforcements on the inside and Redden is the player who will take on that opportunity. Typically playing a variety of roles in this packed Eagles outfit Redden should return to his most natural position as inside midfielder for the majority of this game. He brings a 140+ point ceiling as we saw in the finals series last year.

Luke Shuey (MB $9,200, DS $14,320) is having one of the best seasons of his career in 2019. However, in the past Sydney have loved to tag him with George Hewitt. Last year when the Eagles met the Swans at the SCG Hewitt restricted Shuey to just 14 touches and 53 fantasy points. 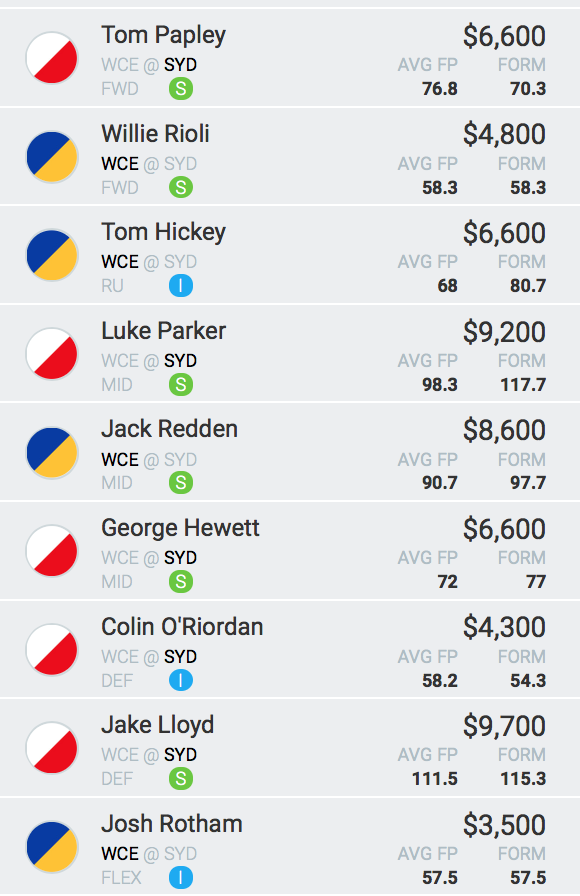