A single game Sunday slate for this bye round with a match between North Melbourne and GWS. The major tournaments on offer include:

Here is how the bookmakers’ see the matchup:

The Giants have been the toughest team to score fantasy points against this season giving up just 1,436 points per game. The Kangaroos on the other hand have sat at around league average for points conceded this year.

Forward has been another position to target against North Melbourne where they have given up the 7th most points this season.

The only position that GWS look to be vulnerable is in the ruck. They have given up 90 points per game to the oppositions number 1 ruck. On the other hand Goldstein has been stingy this season allowing just 81 per game, the fifth lowest amount in the league this year.

Jake Stein (MB $3,500, DS $5,000) is debuting as a mature age player at 25 years old and a former decathlete. Stein has played roles deep in defense and being priced at the minimum will give him an opportunity to return value with cheap possessions as the Giants work the ball out of the backline. He will also provide salary relief to squeeze in the GWS premium midfielders who will undoubtedly be in winning lineups on this slate.

Jacob Hopper (MB $7,800, DS $12,440) brings a GPP ceiling at this price point. He has posted four scores of 108 or better this season, including 120 fantasy points against the Gold Coast two weeks ago. As mentioned above this is a positive matchup for GWS midfielders with the Kangaroos conceding 110 points per game to the top 3 scoring opponents.

Harry Perryman (MB $5,800, DS $11,180) is playing through the midfield this season for GWS. Since returning from injury he has posted as average of 92.5 fantasy points while playing this new role. His price is yet to see a rise to reflect this and he should still return value in this positive matchup.

Jack Ziebell (MB $8,200, DS $14,430) has been playing through the midfield in 6 of the last 7 games and has delivered in spades. He has averaged 114 points in these games with 5 scores of 100+ that included 2 scores of 145 or higher. As noted above this isn't an ideal matchup, however Ziebell still looks to be underpriced for the role is currently playing and loves playing down at Blundstone Arena where it should be a contested game. 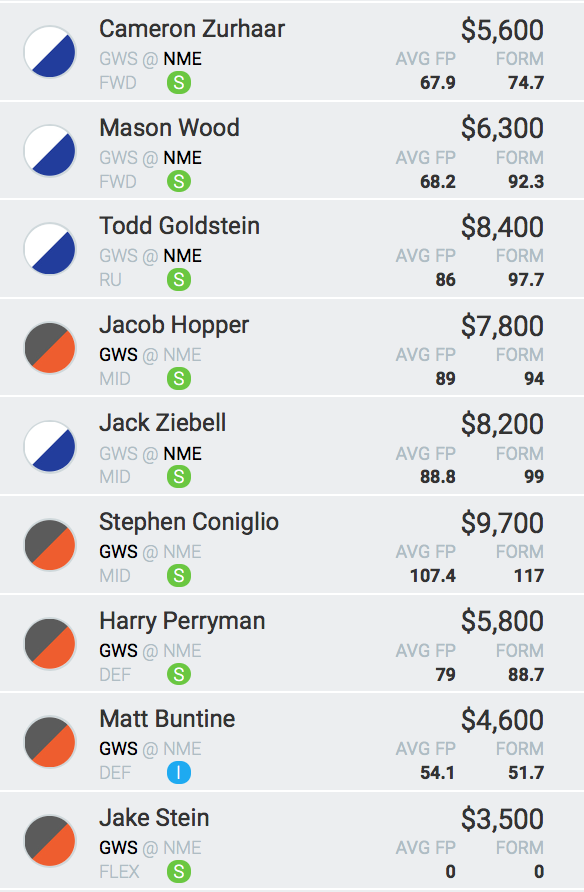