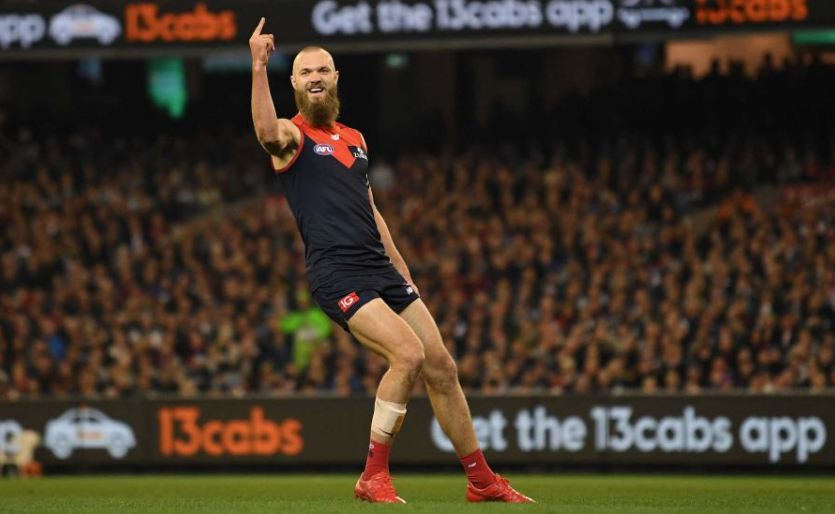 Welcome back to the Super Saturday Round 14 the final Bye Edition. We have a perfect little triple header to work through with another set of monster AFL Daily Fantasy Contests:

Also note that Moneyball have the target contest for AFL. The target score is set at 1025, with the total prize pool set at $15,123 for the Friday night slate.

Melbourne and St Kilda look to be the best teams to attack on this slate, giving up the 4th and 5th most points of the teams playing this year respectively. Fremantle are the only other team on the slate that is giving up over 1,600 points per game.

St Kilda have been a side to attack with backs this year giving up the second most points in the league to the position. They have been particularly vulnerable to the oppositions top scoring defenders, giving up 92 points per player. Melbourne have also been leaky in this regard conceding 89 points per player.

Geelong and St Kilda are the two teams to target in the ruck on this slate. The Cats have given up 91 points per game this season to the oppositions number 1 ruck (5th highest in the league), while St Kilda have conceded 90 (equal 6th most). Melbourne and Brisbane are two no go zones for rucks with Max Gawn and Stefan Martin conceding the fewest points in the league this year.

Dan Hannebery (MB $5,500, DS $8,550) has had his career derailed in recent years with his fantasy average dropping from 108 points in 2016 to just 59.8 points from 14 games in 2018. This has largely been due to the toll of several injuries. This summer he moved on from Sydney to St Kilda and after spending the first half of the season rebuilding his body is set to debut for the Saints.

Due to his 2018 performances Hannebery is low priced on both platforms compared to his ceiling. Even during 2018 he posted two 90+ games in his last four games, which indicates the potential to return value is still there. In his two lead up games for Sandringham he posted 83 and 80 fantasy points and should receive plenty of time in the midfield with Jack Steele out.

Griffin Logue (MB $3,500, DS $9,580) is going to be very hard to ignore on this slate at Moneyball. He is still priced at the bare minimum after a 100 point performance in his first game of the season last week. On this slate he now faces Melbourne who have given up the third most points in the league to defenders this season, which is where Logue is playing. Logue isn’t without risk given he averaged in the 40s previously, however a player at bare minimum with that upside is always in play.

On Draftstars he is priced out in my opinion, however other options that would suit on that platform include Noah Answerth (MB $4,000, DS $7,120), who has the perfect matchup against the Saints and has already show capability to deliver 10x value at this price point this season.

Connor Blakely (MB $7,600, DS $11,950) has now had four games on top of his WAFL action since returning from a significant hamstring injury that kept him out of the first half of the season. Blakely has averaged 91 fantasy points in each of his past two years and should be nearing return to that level of output. This slate is the perfect matchup for Blakely, who is playing a role across half back as the Demons have conceded 89 points per player to the oppositions top 3 scoring defenders this season. If you are going to make Griffin Logue your value play Blakely should also correlate nicely with that play.

Max Gawn (MB $10,500, DS $16,500) is where I will be spending my money on this slate. This won’t be obvious from the overall stats above as Darcy has rucked in just 3 matches this season, but he has been notorious for conceded points over his career. This season in his 3 games he has given up 90+ to both Todd Goldstein and Jarrod Witts, and a combined 140+ to Scott Lycett and Paddy Ryder last round.

Gawn should dominate this contest and particularly beat Darcy around the ground. He brings a 150 point ceiling and this should be in play in this matchup.

Angus Brayshaw (MB $8,300, DS $14,520) has had a disappointing season along with the majority of the Melbourne side in 2019. After a breakout year in 2018 where he averaged 105 fantasy points his role looked to have changed throughout 2019 as he was moved to the wings and half forward flanks.

Last week that change looked to be dispensed with finally as he returned to the middle and posted a score of 129 points against the Pies. If that role is to continue he is underpriced and should return value on this slate. He brings a massive ceiling of 140+ and this is a rare match where the Demons are favoured this season. 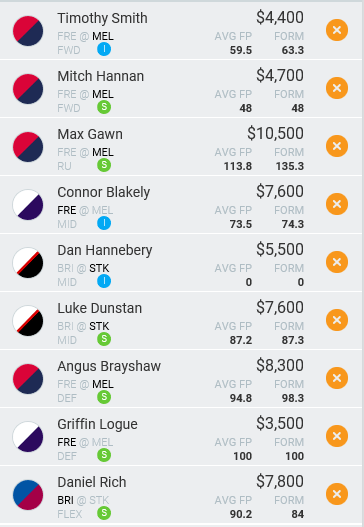