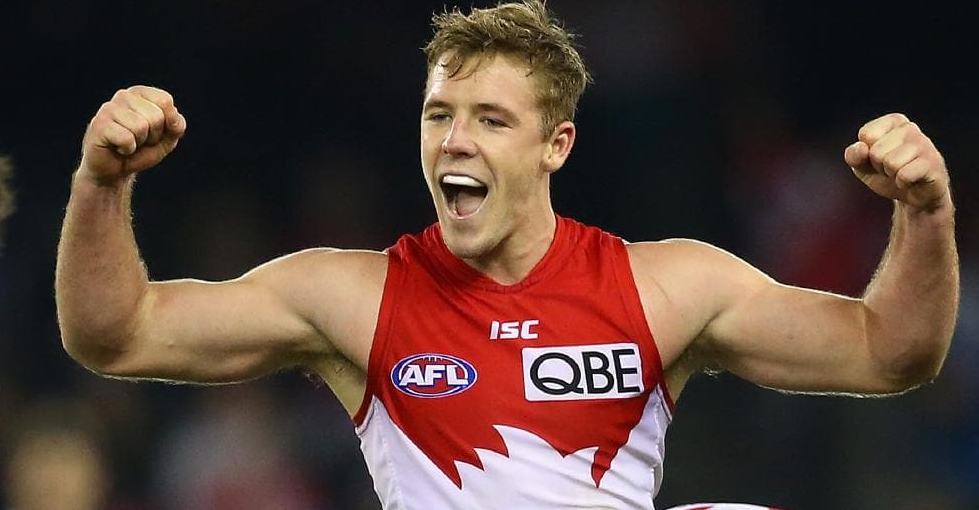 Bye rounds are over and that means Super Saturday is back. For Round 15 we get a massive four game slate with massive DFS contests on offer across the platforms:

The four games on this slate are as follows:

The Gold Coast Suns stand out as the team to attack on this slate. They have conceded the most fantasy points of all 8 teams playing on Saturday and the third most in the entire league for 2019. Hawthorn have given up the next highest, while Collingwood and Sydney look to be the teams to avoid.

Hawthorn are the team to target via the backline. They have conceded the most points in the league to defenders this year, and in particular, key defenders. Unfortunately Jeremy McGovern is out on this slate, which means we will need to look elsewhere to take advantage of this matchup.

Load up on the premium Sydney midfielders on this slate as they draw the top matchup in the league against the Gold Coast. The Suns have given up the most points in the league in 2019 to midfielders, and this includes conceding a ridiculous 122 points per game to the opposition's top 3 scorers.

The Western Bulldogs will once again be the side to target in the ruck this year as Tim English continues to give up the most points in the league to his opponent. The only other team that is conceded above average points to the position is West Coast, who this week have Nic Naitanui returning meaning we should see that number plummet to close out the year.

Both the Port Adelaide vs Western Bulldogs and West Coast vs Hawthorn game look like they could be impacted by rain this Saturday. Monitor the weather situation in these games and if the wet weather eventuate look to play rucks and/or inside players.

Oliver Hanrahan (MB $4,400, DS $5,400) is making his debut for the Hawks. He has spent 3 almost 3 season on Hawthorn's AFL list, making him a good age and experience for debutant. He plays as a small forward, which can make it difficulat for fantasy scoring, however he shown ability for fantasy points at the VFL level averaging 62 per game this season. Hanrahan is better value at Draftstars than Moneyball.

Kyron Hayden (MB $3,500, DS $5,000) is another player making his debut on this slate and worth a look if you are wanting to squeeze in a number of premium players. He isnt the safest play on the bogard, but as a big bodied midfielder for his age he should get some exposure to the centre. He hasn't been a big scorer at the VFL level averaging just 55 fantasy points this season, however one of his biggest attributes has been his tackling, a skill that should translate across levels and help hit that 10x in value.

Brad Sheppard (MB $7,600, DS $12,230) draws the top matchup for his position in the league on this slate for his position. As noted above the Hawks have given up the most points in the league to backs this year and have been notorious for conceding to key defenders in particular. Sheppard plays both tall and small and with Jeremy McGovern out suspended (was going to be my lock and load back this round) should eat up some of those points. Keep an eye on the weather alert above, if it is extremely wet in Melbourne this isn't a route I would go, however in dry conditions it is an elite play. Going a step further an ultra sneaky play would be to pair Sheppard with Will Schofield (MB $3,500, DS $5,500), you can gaurantee Schofield will be minimally owned, but on a slate with little obvious value and a dream matchup without McGovern playing he could get you that 10x return at essentially minimum price that no one else hits.

Scott Lycett (MB $7,000, DS $13,430) was a lock and load play last week with Paddy Ryder being dropped to the SANFL. Lycett took over the primary rucking duties winning 85% of Port Adelaide’s hit outs, his highest mark of the season by far: 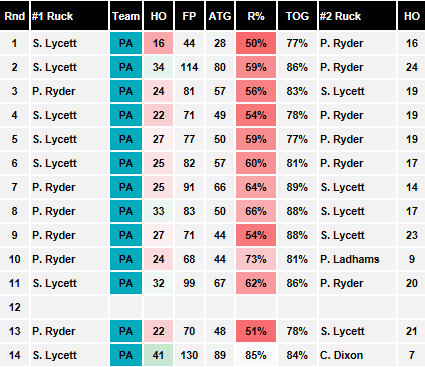 This resulted in his highest score of the year of 130 fantasy points. On this slate he draws the best matchup in the league for his position against the Tim English and the Western Bulldogs. Furthermore, as noted above it is forecast to rain significantly in Adelaide for this matchup, which generally leads to more stoppages and more fantasy points for ruckman. Unfortunately after last week the secret is well and truly out on Lycett, but he remains a lock and load play on this slate.​

Luke Parker (MB $9,700, DS $15,890) has remembered how to play football these last 5 weeks averaging 124.4 fantasy points during the stretch. The return of Josh Kennedy last week did nothing to temper this as he posted his highest score of the season with a 157 points against Hawthorn.

As noted above, on this slate Parker draws the top matchup in the league against the Gold Coast Suns. The Suns have given up a massive 122 points per player to their opponents top three scorers through the middle. Stacking Sydney midfielders will be a popular play on this slate, and it all starts with Parker.

Josh Dunkley (MB $10,000, DS $15,250) has been totally unhinged since moving into a more permenant role through the midfield. Over the last 7 rounds since the role change he has averaged a ridiculous 124 fantasy points, with just one score under 118. Dunkley is an inside player who has averaged 16 contested possessions and over 6 tacjkes during this stretch of games, which indicates if the weather is as forecasts he should be well suited to the conditions. If you are looking to spend down a little in the same matchup, Ollie Wines (MB $8,600, DS $12,330) is another contested bull who should be suited to the wet (he posted his highest score of the season, 116, against the West Coast Eagles in wet conditions). 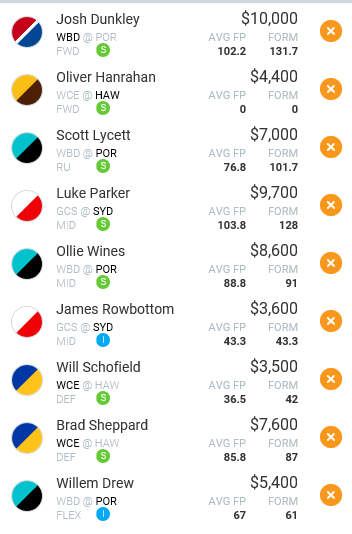