The best part of the bye rounds being over is the return of the three game slates on Sundays. For Round 15 we once again have massive DFS contests on offer across the platforms:

Four of the top five teams in the league for points conceded in 2019 are on this slate. Richmond and Carlton are top 2, while Melbourne and St Kilda are fourth and fifth respectively. This gives us plenty of avenues to target. Brisbane are the only team to avoid giving up the second fewest fantasy points this season.

It would come as no surprise that Carlton have been getting destroyed through the midfield all season. They have conceded the second most points to the oppositions top 3 scorers are 116 points per game. Richmond have also leaked points through the middle sitting just behind Carlton in third, while if you are planning on attacking Brisbane the one position to do some is via midfielders.

Put a pen directly through the ruck contest between MAx Gawn and STefan Martin as the two have consistently given up the fewest points in the league over recent years, a trend that has continued in 2019. By the numbers Carlton still look to be the best target on this slate, giving up 100 points per game to the opposition number 1 ruck, the second most in the league. However with Matthew Kreuzer back in the lineup this number has come down dramatically. The best target will be Richmond, who are still without Toby Nankervis and have conceded an average of 104 points per game to the oppositions number 1 ruckman without him.

Ivan Soldo (MB $4,400, DS $9,550) has played three games this year, all since Toby Nankervis went down with injury. As the first ruck for the Tigers in these games he has averaged 71 points and on this slate draws a plus matchup against Rohan Marshall who has given up 92 points per game to opposition number 1 rucks. Soldo is a great value play at his price point on Moneyball and on that platform an elite play will be to roster both Soldo and Marshall using the flex roster position.

Tom Lynch (MB $4,900, DS $7,700) pops up on a slate where there is no obvious value. He has been priced way down, particularly on Draftstars, and rightfully so. That said, on this slate the Tigers are just under four goal favourites and over his career Lynch has shown well over 100 point upside. This year his ceiling has been 80+, which is GPP winning value. St Kilda have given up the third most points to forwards in 2019.

Jayden Short (MB $6,000, DS $9,990) returns for his first game since getting injured in round 3. Short had a breakout season in 2018 averaging over 75 points, but finished the last 13 games putting up 83 per game. This year he continued that form with 83 and 75 in the first two games. Based on those performances Short’s price is a shade too cheap, and he also draws an elite matchup against St Kilda, as mentioned above, who have given up the second most points in the league to defenders.

Rowan Marshall (MB $8,300, DS $13,820) has the best matchup in the league not named Tim English for ruckman on this slate. Going against the Tigers reserves rucks he should continue his blistering stretch of posting 100+ in the last three games. He also brings GPP winning upside at this price point of 120+ points, which he has topped twice already this year.

Ed Langdon (MB $8,100, DS $12,970) is my go to midfielder play when Fremantle are getting an easy kill at home. He has averaged +8.5 fantasy points at home over his last 20 games on the ground, and on this slate draws one of the top matchups in the league against Carlton. Fremantle are favoured by just under 6 goals and Langdon, as an outside link player, will feature heavily in all my Fremantle stacks. 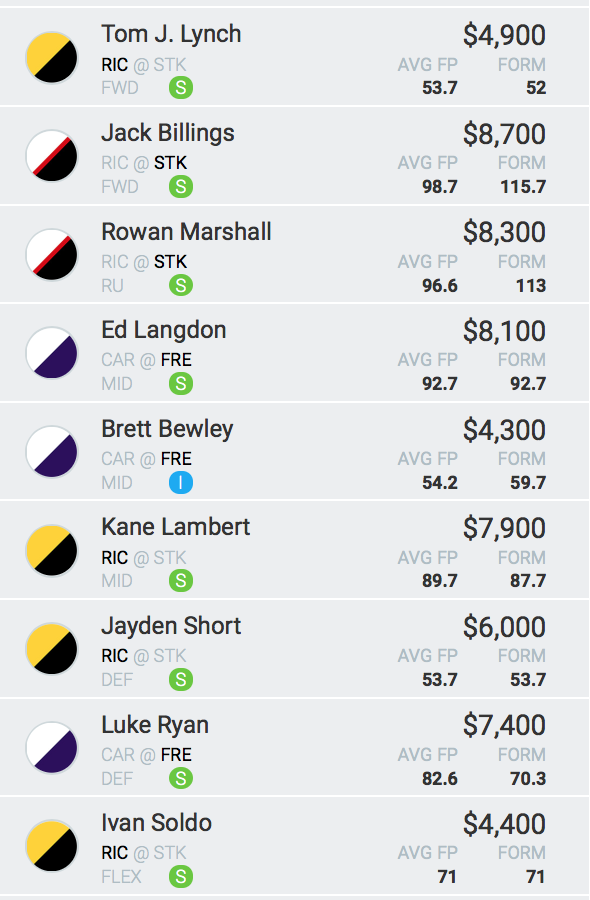