WHAT IT DO BABEEYY! Super Saturday is all the way back in round 16 with a return to regular programming and a massive 5 game slate. Massive DFS contests continue to be on offer across the platforms:

Also note that Moneyball have the target contest for AFL. The target score is set at 1025, with the total prize pool set at $17,182 for the Friday night slate.

Geelong is the team to avoid matching up against, giving up just 1,500 points per game this year, which is the third lowest in the league.

Adelaide and Richmond stand out as the two best teams to target with premium defenders on this slate. They have given up 90 and 89 points per game to the opposition's top three scoring backs respectively this season.

On the flip side defenders against the Gold Coast are one of the few positions to be wary of rostering.

Another week, another slate of targeting midfielders against the Gold Coast. The Suns continue to be destroyed by the oppositions engine room, particularly the top players, where they have given up 121 points per game to the top 3 scorers in 2019.

Fremantle and Port Adelaide have been relatively stingy to opponents top performing midfielders this season, giving up the 4th and 6th fewest points in the league.

There are ruck targets everywhere on this slate, with three of the top four teams for points conceded to the number 1 ruck playing on the slate. The Western Bulldogs remain the top team to target in the league with young Tim English still learning developing into the role. With the Cats ruck position somewhat up in the air at the moment (we have broked this and other teams ruck roles this round in more detail below), this might not be the most obvious route this week. English will also be worth considering as the Cats have given up 96 points per game to number 1 rucks this year.

The obvious player, however, will be Jarrod Witts who is matched up against Richmond and Ivan Soldo. The Tigers have conceded 97 points per game (3rd most in the league), to number 1 rucks in 2019.

The Gold Coast is expecting rain on Saturday. This is worth monitoring as the slate approaches. As is typical with these conditions it will be a positive for the rucks, in particular Jarrod Witts who already has an elite matchup. Also look to roster inside players who thrive off tackles rather than outside or key position players.

Poor form and injury has resulted in shuffling of several rucks for teams on this slate that are typically rosterable in other positions. It is worth considering each of these players as if they get an extended run in the ruck it is likely lead to them returning value at their price points.

Mark Blicavs (MB $5,800, DS $9,400) saw a significant increase in ruck duties last round as the Cats did not have their usual chop out options in Fort or Ratugolea available. Rhys Stanley is currently in a significant form slump, getting well and truly beaten in recent weeks. As the game went on last week the Cats ended up going with Blicavs as their lead ruck, he ended up with 47% of the Cats total hitouts despite attending just 38% of the ruck contests.

The positive for Stanley holding the ruck position is that he matches up with Tim English, who as mentioned above has given up the most fantasy points in the league this season. 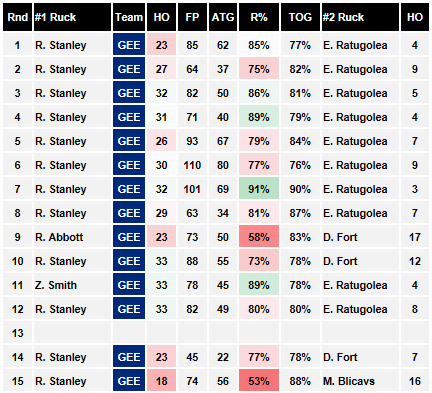 Reid and Aliir took over the ruck duties last week with Sinclair going down early in the game with injury. The Swans have not replaced Sinclair as they have struggled all season to have any of their backup rucks available for selection. At first look Reid (84 fantasy points) outscored Aliir Aliir (69 fantasy points). He was more successful in the ruck contests and kicked 2 goals while playing forward. However, Aliir Aliir did spend more time rucking, attending 70 ruck contests to just 25 for Reid. Based on this I would expect Aliir Aliir to be taking responsibility and as the number 1 ruck this round and likely to be the better option. 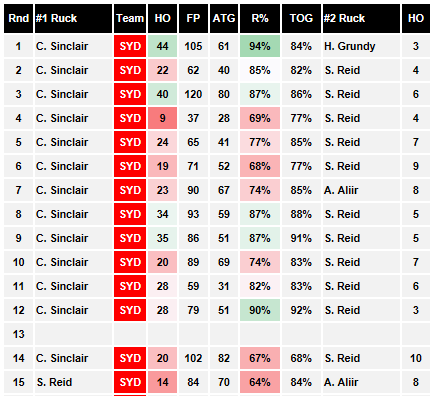 Zachary Clarke (MB $5,700, DS $9,880) has played three games this season and is yet to top the 50 point mark. This slate will be his first as the lead ruck, however, with Tom Bellchambers out injured. In addition to seeing a significant boost in ruck contests, he will be playing Sydney, which is an elite matchup this round as noted above with the Swans going with Aliir Aliir and Sam Reid as their ruck duo.

Derek Eggmolesse-Smith (MB $3,500, DS $5,000) is set to debut in the top matchup in the league from a fantasy point perspective He is likely to get a role across half back where he has played the majority of his football. This should open up the opportunity to accumulate cheap points.

Martin Gleeson (MB $5,700, DS $6,200) got his first game since 2017 under his belt last week and despite being a popular play in a single game slate returned just 45 fantasy points. The best part of this is his ownership should drop off dramatically and we can back the truck over it. Remember for the past two seasons he played he averaged over 64 fantasy points in both years, which would be a return of 10x in value on Draftstars. If you can get that return at low ownership it will setup your entire slate.

Joel Selwood (MB $7,500, DS $11,990) made a very clear move last round from playing an outside role on the wing to playing inside the centre square. His attended 18 centre bounces, the second highest of any Cat behind Tim Kelly (and up 22% from the previous round). This resulted in his highest fantasy score for the year of 115 points. We all know the ceiling Selwood brings if he is playing his role of past seasons, and the Cats might be integrating him back into the fold as finals approach.

Jarrod Witts (MB $9,000, DS $14,390) is the premium ruck of choice on this slate. He has an elite matchup against the Tigers second string ruckman who has conceded 93.5 points to opposition number 1 rucks this year. This play is made even better with the possibility of rain, which will boost the number of stoppages and Witts scoring has been primarily driven by hit outs this season, averaging the 45.9 (the most in the league).

Rory Sloane (MB $8,900, DS $14,360) has absolutely dominated the Showdowns throughout his career. In the last 5 contests against Port Adelaide he has averaged a massive 119 fantasy points. The only threat he faces to slow him down would be a tag. It is worth highlighting that Dan Houston was used to tag Tim Kelly two weeks ago, however, with Tom Rockliff returning the space in the middle will be limited to bring in a tagger. Sloane price is in the perfect spot to return GPP winning value on this slate, with a 150+ point ceiling. He posted a 130 points against the Power earlier this season. 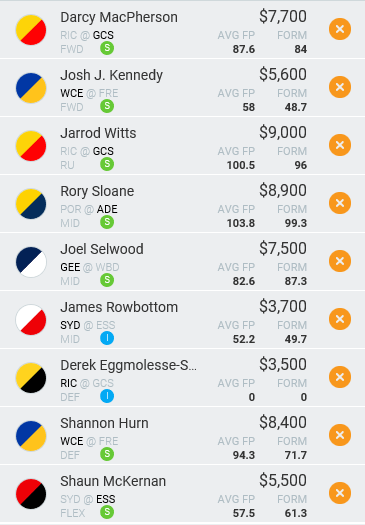