The perfectly sized three game Sunday slate is back and upon us for Round 16 of the 2019 AFL Premiership Season. The major platforms continue to roll out massive DFS contests:

Also note that Moneyball have the target contest for AFL. The target score is set at 1025, with the total prize pool set at $17,182 for the Friday night slate.

It is feast or famine on this slate with two of the four leakiest teams in the league this season facing each other in Carlton and Melbourne, while the two stingiest teams also matchup in Brisbane and GWS.

North Melbourne might be the best team to target as they matchup against St Kilda down at Blundstone arena. St Kilda have given up the 5th most points in the league this season.

St Kilda have been one of the top targets for defenders all year, particularly for premium backs. The Saints have conceded 92 points per game to the oppositions top three scoring defenders, which is the second highest mark in the league.

Carlton have given up the second most points in the league this year to number 1 rucks. This has tempered somewhat with Matthew Kreuzer back in the lineup but should still be a great matchup for the superstar Max Gawn if you trust he has recovered from the rolled ankle.

Stefan Martin has also returned to form recently and draws the 5th best matchup in the league against the Giants who has given up 92 points per game. This round it will be Dawson Simpson who will take the ruck duties for his 4th game of the season.

Kyle Dunkley (MB $3,500, DS $5,000) is set to debut for Melbourne after being picked up in the mid season draft. He is an inside midfielder who has the capability to go forward and should get the opportunity to do both for Melbourne this week. He has drawn an elite matchup for his first game of AFL football against Carlton who have given up the second most points to midfielders this season.

Ed Curnow (MB $7,600, DS $12,990) saw a dramatic role change with Patrick Cripps out last round, attending the most centre bounces for the entire team. The 23 CBA’s was a 23% increase from the prior week, and Patrick Cripps remains out again this season. Last season while playing in the midfield Curnow averaged over 100 points, and scored 101 in a similar role last week. His price is far too cheap if he is playing in the middle, and he has an elite matchup this week against Melbourne who have given up 113 points per game to their opponents top 3 scoring midfielders.

Jasper Pittard (MB $6,700, DS $10,800) draws one of the top matchups in the league for his position on this slate. As noted above St Kilda have conceded the second most points to the top three scoring defenders this season. Pittard has displayed 100+ point ceiling this season, which is a GPP winning score at his price point.

Jack Ziebell (MB $8,800, DS $13,700) has been playing through the midfield significantly more the last 9 rounds and it has resulted in a huge boost in his fantasy scoring. He has averaged 103 fantasy points per game during that period, including two scores over 140. Ziebell loves playing down at Blundstone Arena as well where he has averaged 102 fantasy points over his last 11 games at the ground. Last week his center bounce attendances were down from the week before at just 8, but he still managed 120 fantasy points. The last time I tipped him in at Blundstone he posted a whopping 155.

Stefan Martin (MB $7,700, DS $12,140) has wound the clock back the last two weeks with scores of 115 and 119 points. Martin will benefit this round from playing as a solo ruckman again with neither Archie Smith or Oscar McInerney. As you can see from our ruck tool, with McInerney going down with a concussion in last weeks game Martin had 92% of the Lions hit outs, which was his highest mark of the season by 20%. 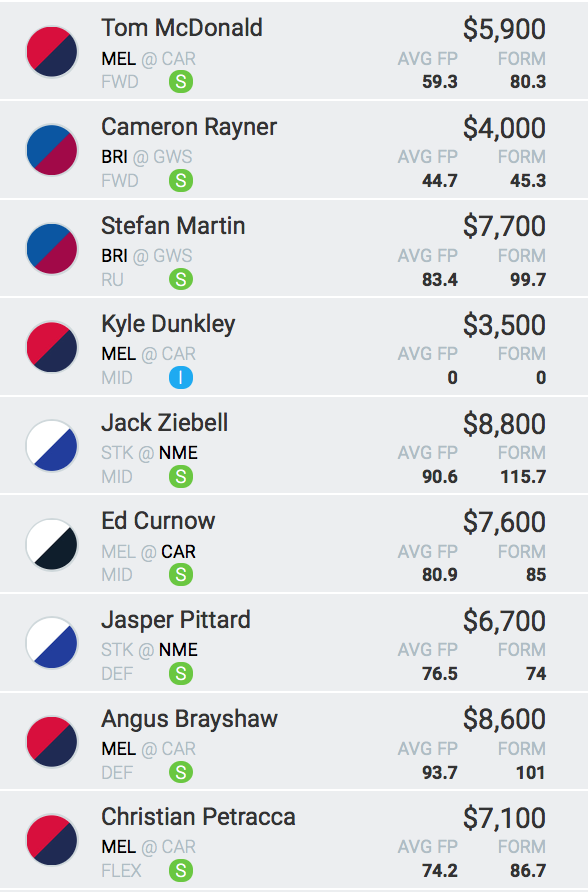