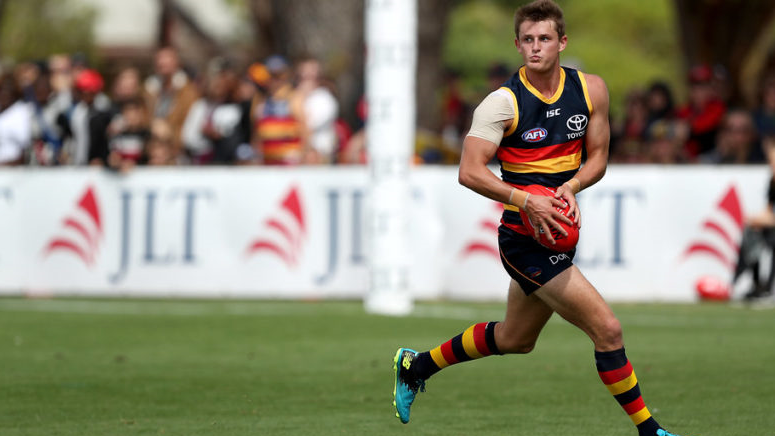 Get on board for another Super Saturday with round 17 bringing a massive 5 games of action. DFS contests continue to be on offer across the major platforms:

This Saturday could be another daily fantasy scoring fill up with three of the top four teams for points conceded all playing on this slate, and all rather large underdogs. Gold Coast have given up the most points this season and will face the Crows at Metricon. Carlton have conceded the second most points this year, but have been harder to score against since Brendan Bolton was shown the door, giving up just 1,590 points over the last 5 games. St Kilda are also on the slate, conceding the fourth most points this year and have one of the toughest road games in the league down at Geelong where they are 44.5 point underdogs.

This slate is a defenders dream with the top four matchups for backs all playing on Saturday. Hawthorn have been the number one target for defenders all season (a trend that has been relatively consistent through 2018 as well). They are playing in the friendly confines of UTAS Stadium in Tasmania on this slate, which might not be as positive for rostering Fremantle players. However, the Dockers have given up the second most points to the position this year, so the Hawks backs will also be in play.

By this point in the season I surely don't have to tell you about playing midfielders against Gold Coast. It is going on the second season where this has been the most clear cut DFS play you will find with the Suns conceded a ridiculous 121 points per game to the oppositions top 3 scoring midfielders.

The rucks are the position that becomes a little tricky on this slate. Carlton are the team conceding the most points, however as you can see Matthew Kreuzer has not been allowing big scores recently giving up just 77 points per game to opposition number 1 rucks across the last 5 games.

Geelong and St Kilda are the next top targets and they match up against each other at the ruck friendly ground down at Geelong. Geelong’s ruck setup like other teams on this slate is in a state of flux and we break it down a bit further below.

Time to channel our weekly Alan Wilkie and check the weather forecast from around Australia for this Saturday slate. The only location that currently stands out as risk is the Melbourne and Geelong area. There isn't a great deal of rain expected, but it is worth keeping an eye on conditions closer to the first bounce.

Last Saturday we broke down the all the chaos we were seeing in the ruck lineups. There has been little change to last weeks status and it appears the teams playing makeshift ruckman are all on the super saturday slate again. The real positive here is that we do have an extra week of evidence to consider:

Rhys Stanley (MB $7,200, DS $11,790) / Mark Blicavs (MB $10,750, DS $10,750)... the Blicavs party is likely to be over with Esava Ratugolea (MB $4,200, DS $6,040) returning to the lineup for the Cats. Last week as we expected Stanley returned to form with an elite matchup against Tim English. He notched 98 fantasy points, and as a result Blicavs saw his number of ruck contests halve from the week before. This week Ratugolea should take over that chop out role, which might make him a sneaky GPP play in the even that Stanley starts getting beaten by Rohan Marshall.

Zac Clarke (MB $5,400, DS $5,740) / Shaun McKernan (MB $5,700, DS $10,930) well well well… Zac Clarke really cemented his position as the worst player getting a game in the AFL last week. Playing makeshift ruckman Aliir Aliir he managed just 37 fantasy points and ended up attending just 61% of the ruck contests and winning 69% of the Dons hitouts. This opened the door for big Schmacko McKernan who went into triple figures and looks far more likely put together a winning fantasy score. That said, Clarke is just so cheap on Draftstars I am going to have some exposure and expect him to be low owned after he burned so many last round. 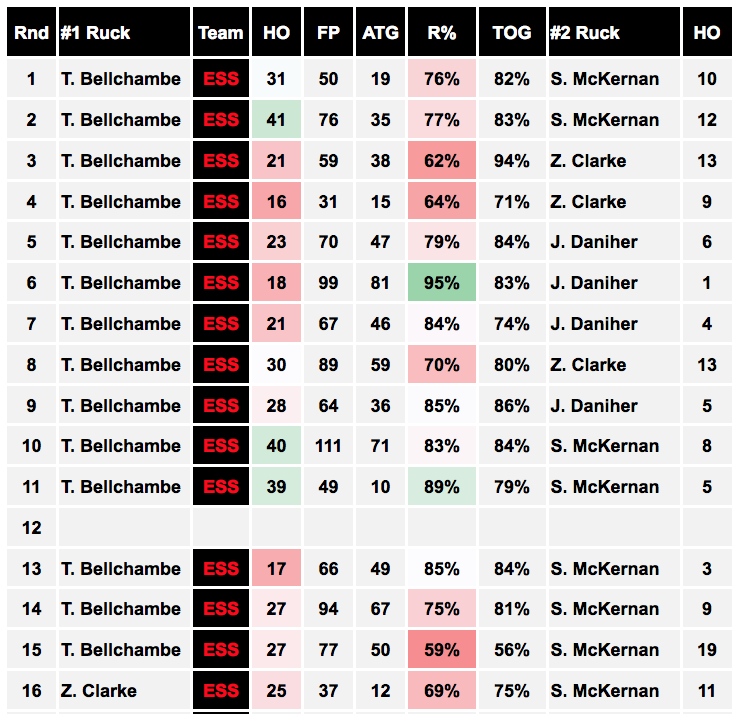 Aliir Aliir (MB $6,100, DS $9,010) attended all but 5 of Sydney’s ruck contests last week and was the only player for the Swans to register a hit out. With no changes that would impact that role for round 17 we can expect similar this week. At his price he has yet to really demonstrate a ceiling in this role, but for GPPs, the potential for him playing around the ground as the ruckman is worth consideration.

James Rowbottom (MB $4,000, DS $8,090)... I have been feasting on as the value play the last two weeks. Rowbottom has been an absolute pig in the NEAFL this season averaging a shade under 30 touches and 7 tackles per game. Since returning to the Swans AFL side these last two rounds they have let him rotate through the midfield, his natural position, seeing around double figure centre bounce attendances. He has returned 79 and 87 fantasy points and has another positive matchup this week against Carlton. He absolutely the lock and load value play on Moneyball and also a strong play at his price point on Draftstars.

Grant Birchall (MB $6,200, DS $8,500) returns for his first AFL match since round 15 2017. It would be remiss of me not to mention him just due to the significant price differential on the sites. His price point at Draftstars beings him right into consideration given that he has averaged over 80 fantasy points consistently throughout his career, and during his 69, 84, 95 and 77 in the four full games he played in 2017. As mentioned above he also draws a positive matchup on this slate for his position with Fremantle conceding the second most points to defenders in 2019.

Joel Selwood (MB $7,500, DS $10,960) let us down last week after I tipped him, but I can’t stay away. As I mentioned ahead of last round his centre bounce attendances were on the rise, and this continued in round 16 attending the most of any Cat, up another 23% from the week before.

With that role and after seeing another price decline after posting a miserable 69 points, he is a lock and load play on this slate. He showed the upside he still possesses last match down in Geelong where he posted 115 fantasy points and if the conditions are a bit wet and slippery that will suit him playing an inside role.

Jeager O’Meara (MB $9,100, DS $13,850) is priced way too far down on Draftstars. He has posted in 4 scores of 112 or higher in his last 7 games, with the other results typically being impacted by taggers. Fremantle have tagged just once this season and furthermore O’Meara (like his other midfielder partner Liam Shiel) loves playing down at UTAS posting 3 scores over 120 points from his last 4 matches on the ground. 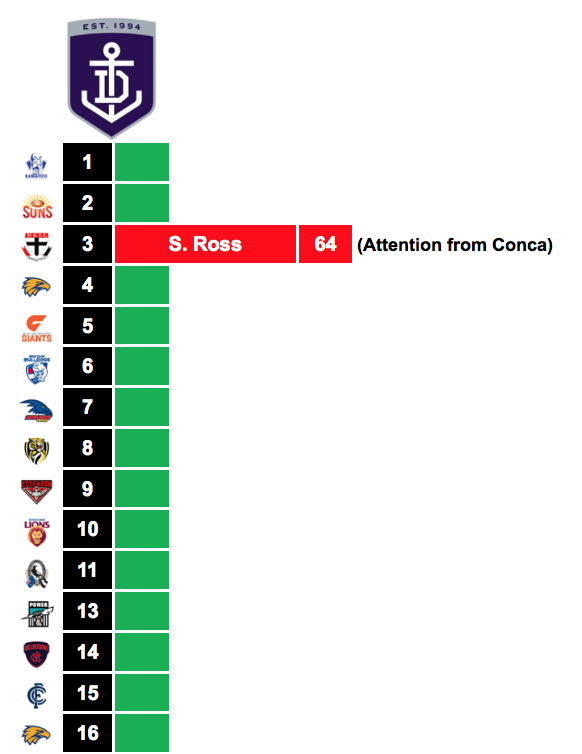 Matt Crouch (MB $9,400, DS $14,250) … to be honest you can just take your pick of Rory Sloane, Brad or Matt Crouch. Matt has been in a modest form slump after posting scores in the 90s his last two games, which might lead to him being the lowest owned of the Crows big three midfielders. As mentioned above this is the top matchup in the league for his position making for the perfect bounce back game. There is no risk of Crouch facing any attention (if Gold Coast were to utilise a Touk Miller type in a run with role that would likely be with Sloane). 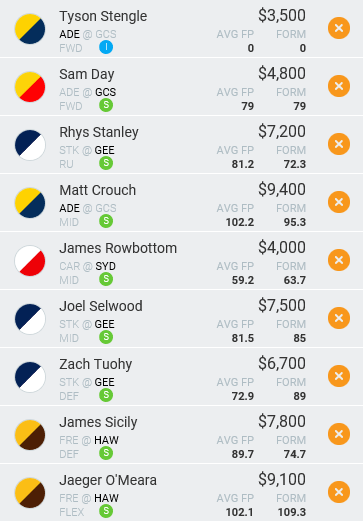