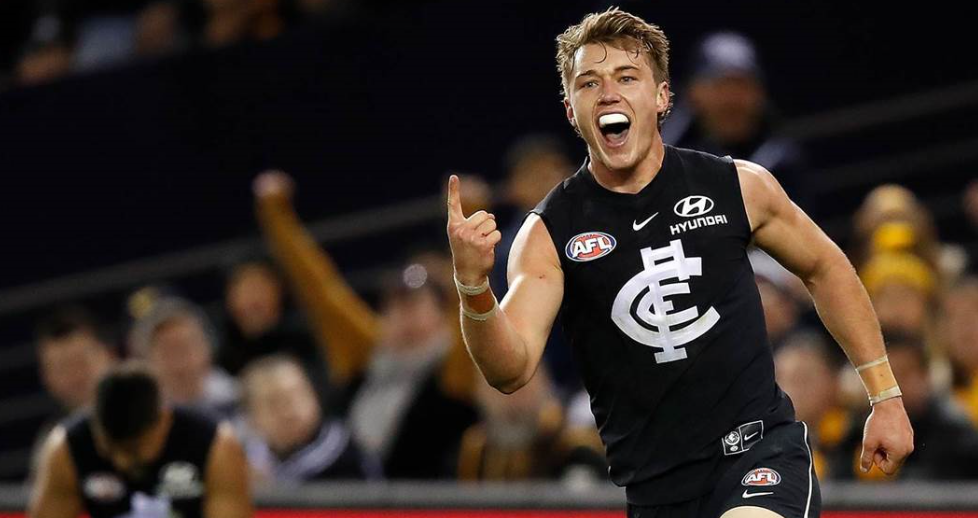 Get on board for another Super Saturday with round 18 bringing a massive 5 games of action. DFS contests continue to be on offer across the major platforms:

Gold Coast are the clear standout team to target right now, conceding the most points in the AFL this season and fresh off back to back 90+ point losses. On this slate they face Carlton who in theory should be a nice bounce back opportunity for the Suns, but since Bolton has been sacked the Blues have been much more competitive giving up just 1,527 fantasy points over the past 5 weeks.

Patrick Cripps is going to be the obvious premium play on this slate. With the top matchup in the league by far for a midfielder against the Suns who have given up 121 points per game to the oppositions top 3 scorers at the position. Carlton are the next best team to target based on the season numbers, but as mentioned above they have been stingy since the coaching change. Both the Kangaroos and Richmond look like positive targets giving up 116 points per game over the past 5 weeks.

Premium forwards have been dining out on the Tigers all year. They have conceded the most points in the league to the opposition's top three scorers at 89 points per game. It no real shock to see the Sun's right behind them in second, while teams playing the Giants, Magpies and Swans should be avoided.

The Tigers remain one of the top plays for rucks in the league and stand out on this slate giving up 97 points per game to the oppositions number 1. Carlton as mentioned for weeks now have become very difficult to score against at this position, giving up just 79 points per game over the last five weeks.

Looks very clear across the country for Saturday’s slate, with Perth the only threat for rain. The current forecast is for the morning with the game not set to start until night time. As usual keep an eye on conditions closer to the date, however it should be dry conditions for all games.

James Rowbottom (MB $4,500, DS $8,510) is still priced well for the output he is providing. Coming up on the third week he has been the staple value player for my rosters and during that period he has averaged 81 fantasy points with a low score of 77. Rowbottom is playing his natural position through the midfield with 11 centre bounce attendances last week against Carlton. He is a safe play for cash, while also offers GPP winning potential.

Jacob Dawson (MB $4,500, DS $6,280) debuted last year for the Suns playing 3 games and averaging 51 fantasy points. In the NEAFL this year he has shown the capability to score averaging 94.6 fantasy points and with the way Dew is currently coaching, Dawson should get the opportunity to run through the middle (8 players had 10 or more centre bounce attendances last round). Another sneaky alternative is Shaun Lemmens (MB $4,000, DS $6,800) who had 15 centre bounce attendances last week (although unfortunately only managed 9 touches). Still he returned value with 65 fantasy points. Lemmens has upside potential, in his first game of the year he had 51 fantasy points before going off injured in the 3rd quarter. You can be certain to get him at the lowest of low ownership with him being no higher than 1% owned this season.

Shai Bolton (MB $5,400, DS $10,270) has been the surprise packet of the last two weeks with the Tigers unleashing him into the middle. Bolton has had 21 and 12 centre bounce attendances over the past two rounds and gone totally ballistic averaging 115.5 fantasy points. The secret is out now but he it would be negligent not highlight him as he is still setup to return significant value at this price point.

As noted above Cripps is almost certainly going to be the highest owned premium midfielders on this slate. Gold Coast are the prime target for inside midfielders in the league and everyone knows it. I still have to point out Cripps last two games against the Suns were scores of 162 and 163. So if you are thinking of fading against the ownership, do so at your own risk.

Marc Murphy is also sitting there as an elite play on this slate. Since the coaching change Murphy has averaged 103 fantasy points while returning to a more regular midfield role. Play them both… play all the Blues if you wish. Go nuts!

These are two of the main players expected to benefit from the decimation of the GWS midfield. Hopper has seen a +6.5 point average this season without Kelly in the lineup and this week the Giants will be without both him and Coniglio. Meanwhile Toby Greene reminded everyone that he was originally a midfielder (averaged 96 fantasy points per game in his rookie year playing an inside role) last week, after he moved into the middle when Coniglio went down and pumped out a ludicrous 144 fantasy points.

Based on the changes made this week it looks like the Giants will be relying heavily on Hopper and Greene again this week to cover the injury losses through the middle.

Scott Lycett (MB $8,400, DS $13,170) is the top ruck play on this slate. Going up against Richmond who have given up 106 points per game to number one rucks over the last 5 weeks and been dominated at the position since Nankervis went down. Lycett has relished in the role as sole ruckman posting 100+ scores in 3 out of the 4 matches, with the only score under 100 coming against Stefan Martin last week (the second hardest matchup in the AFL). 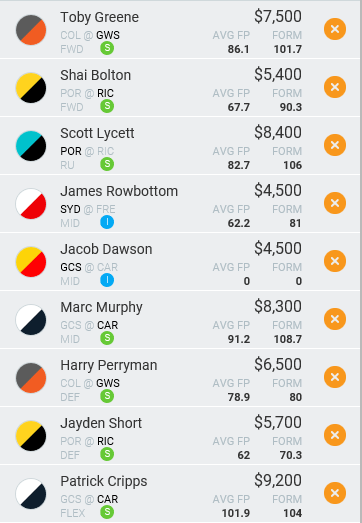